The Rockets just wanted to make sure the outcome was a little different.

They accomplished that goal with an exciting 2-1 victory over Union on its home field. 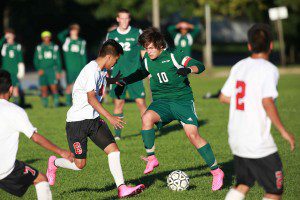 The victory avenged a loss to the Red Hawks 16 days by an identical score, and left the two teams tied for first place in the O-K Black Conference with identical 5-1 league records.

“We’ve been doing a lot of things very well the last few weeks,” said Reeths-Puffer Coach Keith Knapp, whose team is now 8-5 overall. “I told the guys to come in and play the game we know how to play.”

The game was physical and intense, just like it was the first time the two teams met.

Three players were given yellow warning cards in the first half – two Union players and one Rocket – which did not surprise Knapp.

“Last time we played them, there was at least four yellow cards thrown,” Knapp said. “We knew a lot of the intensity would carry over into today but the officials were able to keep it under control.” 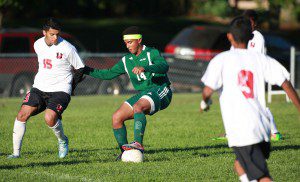 The Rockets opened the scoring when Noah Sorn took a corner kick and passed to Matthew Udell, who ripped a shot into the Union goal to give the Rockets a 1-0 lead.

Reeths-Puffer took a 2-0 lead midway through the second half when Trevor Fowler headed a cross from Zack Anderson into the goal.

Manny Lopez scored the lone goal for Grand Rapids Union with about 15 minutes remaining, but the hosts could get no closer.

The Rocket bench emptied onto the field in a joyous celebration at the end of the contest.

“We had to keep our maximum intensity the whole game, and play our game for the whole 80 minutes, and we did tonight,” Knapp said.