WHITEHALL – Winning has become a way of life in the Whitehall boys soccer program.

The Vikings have won the West Michigan Conference championship every year since 2007 and haven’t lost a conference game since 2010.

So it’s no surprise that the Vikings defeated North Muskegon 4-1 on Wednesday in the finals of the West Michigan Conference tournament. 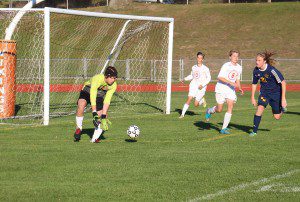 Whitehall goalie Wyatt Scherman makes the save as North Muskegon’s No. 21 Henry Vanderwoude looks for the rebound. Photo/Jason Goorman

They had already finished first in the regular season standings, so winning the tournament wrapped up their ninth straight outright league title.

“It’s been fun,” said Whitehall Coach Bryan Mahan, whose team improved to 14-7-1 overall and 9-0-1 in the WMC. “The guys are great, they work hard all the time. The young guys are all there watching and they’re ready to go (when their turn comes), it’s just kinda fun.”

“It’s just like any other game, we play to win,” said Whitehall senior Jonathon Gonzalez, who had a pair of goals. “Nothing to it, we just play to win every game.”

They were the 62nd and 63rd of his varsity career. Last week Dubois broke the all-time Whitehall scoring record by collecting his 60th goal.

“It’s definitely great for both (himself and the team),” Dubois said after the game. “I didn’t get those 63 goals by dribbling all the way down myself. I’ve got great teammates. They’ve got to get open and they make me get open. 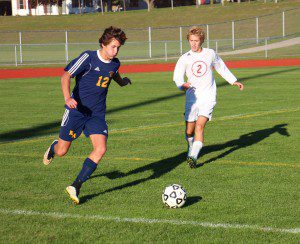 “It’s pretty much just me and my teammates doing what we do.”

The Vikings had to rally to win on Wednesday.

Dylan Hoffman gave North Muskegon a 1-0 lead just over 30 minutes into the match when he tapped in a rebound from a Spencer Mueller shot.

But Whitehall answered just 1:12 later when Dubois found himself alone in front of the net and blasted a shot past North Muskegon goalkeeper Ian Collins.

The Vikings struck again and took the lead for good 14:15 into the second half.

Sophomore Joshua Gonzalez dribbled around Norse defenders in the corner before centering the ball to a diving Dubois, who headed it into the back of the net.

Eleven minutes later, Jonathan Gonzalez corralled a long outlet pass, drove down the center of the field and tapped the ball into the top right corner of the goal to give the Vikings a 3-1 lead.

Jonathan Gonzalez capped the scoring with 1:51 to play when he took a pass from the left wing and lofted it over Collins, again into the top right corner.

Clippers cough up a late lead, lose to Lake Erie 10-8 in opener of home series