WHITEHALL – In a game full of clutch performances from seniors on Senior Night, the Whitehall Vikings snapped a three-game losing streak and kept their playoff hopes alive.

“That was a huge win for us. We were on kind of a losing skid and we told our kids that we’re in the playoffs and we really needed a playoff effort from them,” said Whitehall head coach Tony

Sigmon. “Ravenna is an excellent football team. I’m just proud of the way our kids performed. They battled, they went through some adversity and they responded to the challenge.”

Down three points late in the fourth quarter, Ravenna advanced into Whitehall territory. Quarterback Nick Castenholz threw to the sideline, but Viking senior Connor Rake picked off the pass, then Whitehall marched down the field and scored to take a 10-point lead, effectively ending the game.

As expected, Whitehall kept the ball on the ground the majority of the evening. Joint efforts from seniors Zarren Aylor, Jwan Britton and Nolan Throne helped the Vikings rack up 256 yards rushing. The three combined for six touchdowns in their final game at home.

“What a way to end your last game that’s guaranteed on this field. What a great way to end it,” Sigmon said. “I was so proud of those kids, and it wasn’t just one kid, it was several of them.” 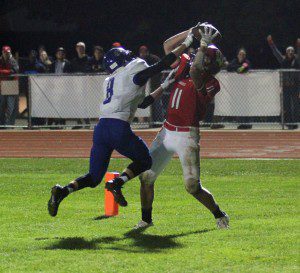 The two squads traded punches throughout the evening.

Ravenna had a 28-24 lead at halftime, thanks to a superhuman performance from junior running back David Thompson.

In the first half, Thompson scored four touchdowns and came up with an interception. The Bulldogs’ return game was crucial to the offensive production, as sophomore Camron Passenier returned a number of kicks deep into Viking territory to give Ravenna a short field to work with.

It wasn’t enough, however, and the Vikings blanked the Bulldogs in the fourth quarter to protect their home turf and escape with a tight, hard-fought victory.

“(The) effort was good. Our kids are playing hard, they’re banged up and they’re staying in there. It’s just the same story every week – it’s execution,” said Ravenna head coach David Smith. “We’re not executing a full game plan and you just cannot have mental mistakes against good football teams in the West Michigan Conference.”

Castenholz’s late interception toss was the Bulldogs’ lone turnover, but seven penalties for 71 yards hurt Ravenna at crucial times during the game.

Aylor led the Vikings offensively, rushing for 79 yards and one touchdown and throwing for 103 and another touchdown. Britton gained 73 yards on the ground and racked up two touchdowns, while Throne gathered 123 yards rushing and receiving, and another 156 in the return game. 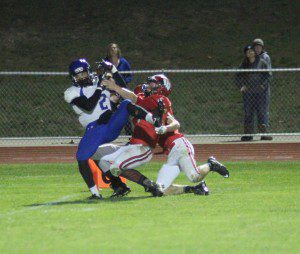 Ravenna’s hopes were officially dashed when Rake pulled in a 15-yard touchdown catch from Aylor late in the game to push Whitehall ahead 45-35.

Britton had scores of three and eight yards, and Throne contributed a 19-yard touchdown rush and an 87-yard kick return touchdown.

Ethan Avery hit a 30-yard field goal for the Vikings.

Thompson had touchdown receptions of eight, 34 and 39 yards, and a touchdown rush of 27 yards. He finished with just 38 yards on six carries, but 108 yards on eight catches.

Castenholz completed 13 of 20 passes for 177 yards, three touchdowns and an interception.

“There’s still a chance we can slide into (to the playoffs) at 5-4, but it’s slim,” Smith said. “We want a winning record. Our goal every game is just to play as hard as we can and execute and we’re not getting both of them together at the same time and that’s frustrating.”