In a must-win game, the Vikings did just that. A loss would have shrunk Whitehall’s playoffs chances to next-to-none. The win, however, gave the team six wins and a spot in the postseason.

“I thinks that’s the most complete game we’ve played, beginning, middle and end,” said Whitehall Coach Tony Sigmon, whose team was 3-3 before finishing the regular season with

Whitehall controlled the flow of the game from start to finish. The Vikings spread the ball around to a number of rushers, eating up big chunks of yardage and controlling the clock after jumping out to a 7-0 first quarter lead.

The Tigers (3-6, 2-4 Central State Gold) scored a defensive touchdown in the first half, but aside from one 41-yard pass, were able to muster little offensive progress.

The Whitehall defense was a stonewall unit all evening, recovering one fumble and limiting Grant to 110 yards of offense with no touchdowns.

“It starts on the inside (line),” Sigmon said. “Jody Jansen and Cain Priese are excellent football players, they’ve been excellent for us all year. They’ve commanded a lot of respect from all of our opponents that we’ve played and they really proved why tonight.” 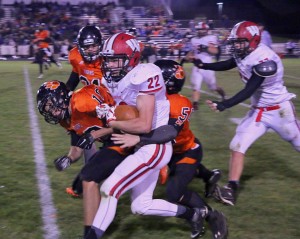 Nolan Throne rushes up the sidelines for Whitehall. Photo/Steve Markel

Whitehall’s offense punished Grant on the ground, with the Viking offensive linemen parting the Tiger Sea time and time again, allowing Whitehall rushers to get into open space.

“Credit our offensive line, they really took over the game.” Sigmon said. “That’s what we love to see, especially this time of year, and that kind of effort getting into the playoffs is great.”

Jwan Britton led eight Viking rushers with 13 carries for 167 yards and a touchdown.

Zarren Aylor scored on touchdown rushes of 4, 4, and 1 yard. He connected with brother Keenan Aylor on a 15-yard touchdown pass in the first quarter.

Zarren Aylor finished 6-13 with 82 yards and a touchdown to go with 12 carries for 72 yards and three touchdowns.

Britton added a 12-yard rushing touchdown in the fourth quarter.

Keenan Aylor led Whitehall receivers with four catches for 72 yards and a touchdown.

Late in the second quarter, Zarren Aylor threw a backward pass behind the line of scrimmage that deflected off Nolan Throne’s hands. Grant’s Rylee Schultz scooped up the fumble and, with the rest of the players stagnant, raced 60 yards for a defensive touchdown.