FRUITPORT TOWNSHIP – With nine players returning from 2014-15, the Mona Shores hockey team has the experience to improve on last season’s 18-8 record.

But the improvement process did not begin in Game 1 on Friday night.

Penalties and an excellent opposing goaltender stymied the Sailors in a 6-2 loss to Livonia Franklin at Lakeshore Sports Centre. 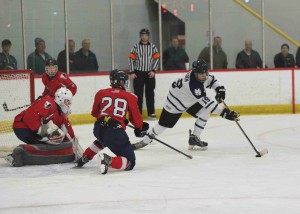 The Sailors hurt themselves by giving up three power play goals.

“We ended up having seven penalties (for 17 minutes), so basically we played two periods full strength and one period killing,” said Mona Shores Coach Dan Quaine. “It’s hard to get in a groove when you’re in and out of the penalty box.”

The game started great for the Sailors. Joel DeVoursney hit senior captain Elijah Wilson with a perfect centering pass at 2:32 of the first period, and Wilson shelved the puck over the shoulder of Franklin goalie Jake Penny to give Mona Shores a 1-0 lead.

But the Sailors did not have much good news the rest of the way.

Wallis put Franklin up 2-1 at the 15:15 mark, beating Sailor goalie Anthony Shrum on the low glove side on a 5-on-3 power play. Whitney and Kolby Dewhirst posted assists on the play.

“When you’re killing penalties, your lines get tired and it’s hard to match up,” Quaine said. “Shame on us for taking so many, we’ve got to do better as a team.” 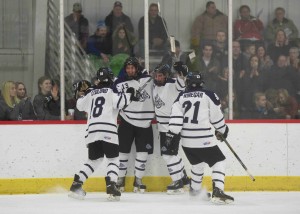 Franklin’s Nic Anderson at 2:21 of the second period to put the Patriots up 3-1.

Less than two minutes later, Mona Shores’ Sawyer Jensen stormed down the left wing to the top of the crease and beat Penny stick side to make the score 3-2. Brennen Winegar was credited with the assist.

But Jensen took a five minute major for boarding at 15:49 of the second period, a penalty that derailed the comeback.

Whitney centered the puck to the top of Shrum’s crease, and Wallis scored his second goal of the night at the 16:40 mark, to put the Pats up 4-2 after two periods.

In the final minute of the game, with Shrum pulled for an extra attacker, Zack Nelson gave Franklin a 5-2 lead with an empty net goal.

Chase Hermann added another insurance goal on a deflection with just 25 seconds remaining.

Franklin outshot the Sailors 29-20 and were 3-for-7 on the power play. 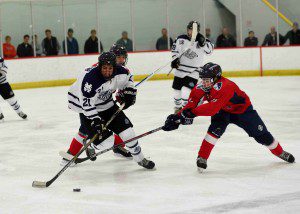 The Sailors host the Anchor Bay Tars at Lakeshore Sports Centre at 4 p.m. on Saturday.