KENT CITY- Grand Rapids NorthPointe Christian has not been good to Montague sports teams this fall.

Then on Thursday the NorthPointe volleyball team took its turn, downing Montague 3-1 in the Class C regional finals at Kent City High School. 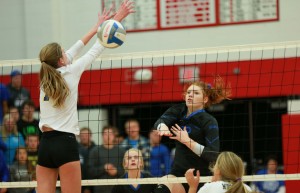 NorthPointe Christian, which won with set scores of 25-20, 19-25, 25-22 and 25-19, will face Bronson next Tuesday in the Class C state quarterfinals at Vicksburg High School.

Montague ended its outstanding season with a 48-11-1 record, four victories shy of a state title.

“We had our chances,” said Montage Coach Shawn Bectel. “In the third game we had our opportunities but still the girls fought hard, I have no regrets on the season.

“They (NorthPointe) are a good team and so are we.”

Montague fell behind 10-5 in the first set, rallied and cut its deficit to 19-18, but then NorthPointe sealed the win with a 6-2 run.

The Wildcats played their best during the second set.

Montague jumped out to a 6-3 lead before the Mustangs went on 5-1 run – powered by a five-point service run by Haley Mueller – to take an 8-7 lead.

The Wildcats responded with 10-3 run of their own to take a 17-11 lead. The run was sparked by three service points and two kills by senior Robbie Berg. Montague held on to the lead to take the second set and even the match.

NorthPointe Christian broke a 6-6 tie at the start of the third set, going on an 8-4 run to take a 14-10 lead. The Wildcats responded with a 7-1 run to take a 17-15 lead, led by four straight service points from Sierra Armstrong. But NorthPointe came back and stole the crucial set with a 10-5 run. 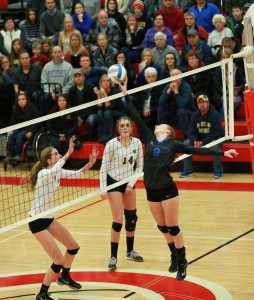 Summer Garwood (9) tips the ball over the net for Montauge. Photo/Kevin Sielaff

Montague did not back down during the fourth set, opening with a 5-1 lead. But that was as close as the Wildcats came to forcing a fifth set.

NorthPointe Christian took a 10-9 lead, then went on 7-2 run and cruised to the set and match victory.

“We wanted to get a regional championship on the banner in our gym.”

Sarah DeVries led the Mustangs with 23 kills and added 13 assists, while Raegen Melton had 14 digs and chipped in with 19 assists.