FRUITPORT TOWNSHIP – Caroline Price had been a member of two district championship teams at Muskegon Catholic, and she didn’t want that streak to end in her senior year.

There was a chance of that happening on Friday, when her Crusaders lost the first set of the Class D district volleyball finals to Fruitport Calvary Christian. 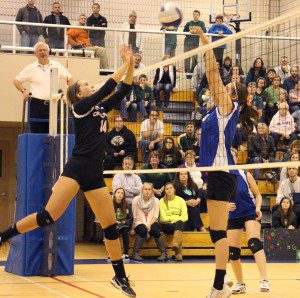 But Price came alive in the second set, pounding home three big kills and successfully serving the final seven points, allowing MCC to take the set and tie the match.

The victory gave the Crusaders their sixth straight Class D district title and sent them to next week’s regional tournament in Big Rapids.

“We were trying to go for number six and I’m so happy we got it,” Price said. “We had to push through and win that second set so we could get number six. It feels amazing.”

Big hitting set the Crusaders apart from the Eagles all night, and Caroline Price was only part of that equation. She and her sister, sophomore Zoie Price, both scored important points when their team needed them most and led MCC with 16 kills apiece.

“We rely on our Prices a lot to put the ball away, and our other two hitters, Emma VanFossen and Laura Doriot, also place the ball well and do a good job,” said MCC Coach Laura Farrell, whose team is 14-21 on the season, but has won its last five matches.

Farrell said the contest was a replay of last year’s district finals, when Calvary also won the first set before MCC roared back to win the next three.

“These seniors went through the exact same thing last year, so for them it was history repeating itself,” Farrell said. “They knew exactly what they needed to do.” 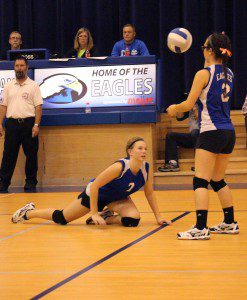 Fruitport Calvary Chrstian’s No. 7 Audrey Vereeke gets the dig as No. 2 Britney Zehr gets ready for the hit. Photo/Jason Goorman

The first was distressing for MCC, which pulled away from a 14-14 tie and jumped out to a seemingly safe 22-16 lead. But Calvary roared back to tie the score at 22-22, then took the last three points and the set.

That woke the Crusaders up.

MCC’s Adeline Bonnette opened up the second set with eight straight service points, including three three aces, to give her team an 8-0 lead. Caroline Price added four big kills during the uprising and served the last six points to clinch the 25-8 victory.

“I knew we were off a little bit in the first set,” Farrell said. “We were a little too worked up and needed to calm down.”

The third set was close in the beginning, with MCC sitting on an 12-11 lead at midpoint. But the Crusaders scored the next six points, featuring two big kills by Zoie Price and an ace from Bonnette, to take control of the set.

Caroline Price helped clinch the set with two straight kills in the late going. Janae Schultz served the final four points, with the last two being aces, to seal the 25-14 win.

Calvary Christian fought hard to stay alive in the fourth set, knotting the score nine different times, with the final tie being 18-18.

But the Crusaders won the match and the district title by winning the final seven points. Zoie Price sparked the final run with a block at the net and a kill while Caroline Price added another kill. 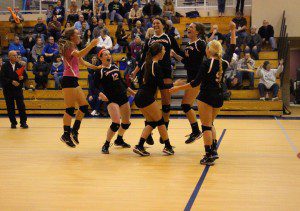 Maddie Olsen served each of the last seven points and had two aces, including one on the final point.