With Matt Zerfas leading the way, the Fremont boys cross country team will try to win a state title on Saturday

FREMONT — The seeds were planted for the Fremont cross country team to blossom nearly four or five years ago.

That’s when most of the Packers’ talented varsity runners began competing at the middle school level and started to envision success down the road in high school.

“This group is so close. We see each other as a family,” said Fremont junior Matthew Zerfas, who will lead  the Packers into Saturday’s Division 2 state finals at the famed Michigan International Speedway in Brooklyn. 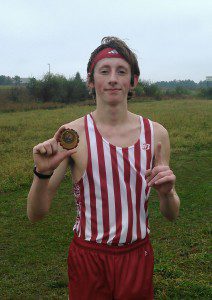 “Having an opportunity to win a state title is a huge, huge deal to us. We’ve been working to make it happen since most of us were in seventh grade. This is something that we take very seriously, but it’s also something that we love to do.”

After finishing second in the state finals last year, the Packers have turned in a dominating season under head coach Cliff Somers, including their most recent performance – an impressive first-place showing at the Division 2 regional at Michaywe Pines Golf Course in Gaylord.

There, the Packers blew away the field, as Zerfas crossed the finish line in first, sophomore Ben Schmidt was second, junior Sam Kaastra was third, and junior Sam Stitt was seventh.

As a team, Fremont tallied 42 points, while runner-up Big Rapids was well behind with 110. Other finishers for the Packers who will also battle it out at MIS are senior Benjamin Deuling and sophomore Ben Devries.

Zerfas clocked in at the finish line at 15 minutes, 55.42 seconds, just a shade slower than his season-best effort of 15 minutes, 18 seconds, at the Portage Invitational.

It’s been a steady rise of success in the sport for Zerfas, who admitted to struggling to find a niche in athletics when he was younger.

“I was never really that good at any sport when I was younger, but then my dad suggested that I try running,” Zerfas recalls. “I guess he was right, because it’s something I’ve just fell in love with.”

Zerfas is so dedicated to running that he’s given up playing basketball in the winter so he can run indoor track. That decision might surprise some, since his father, Peter Zerfas, is Fremont’s varsity basketball coach.

“I like basketball, I enjoy playing it, but I love running,” Zerfas said, who hopes to run at the college level. “I want to be the best I can be at it.”

That’s a mindset that is carried by his teammates, as well. The Packers demonstrated their determination to be the best they can this year by putting in a lot of time in grueling offseason workouts.

“I know you can’t go to cross country camp if you don’t hit at least 500 miles,” Zerfas said. “I know the high this summer was 670. And at camp (near Caberfae ski resort in Cadillac), we had a 100-mile weekend.”

Fremont will be looking to capture its first state cross country title since 2007. Zerfas also has a great shot at capturing an individual title, after placing fourth last season.

“I’m going to do exactly what Coach Somers has told me to do,” Zerfas said. “And that’s go for place. If I do that, my time will take care of itself. In all reality, time doesn’t mean a whole lot, it’s where you place. So I’m going to try to go for first. And if I do that, that’s going to be huge for our team, too.”

The Packers are carrying on a tradition of cross country excellence at their school.

The tradition was developed under legendary coach and program founder Rich Tompkins, whose’ teams tallied a 250-29-1 dual meet record during his tenure, along with 21 conference, 13 regional and six state titles.

Tompkins passed away in July at the age of 69 due to a heart attack, which Zerfas said sent shockwaves through the program.

“We all looked up to him,” Zerfas said. “He wasn’t at all the meets, but he was at cross camp and at most of the bigger meets. He’d always encourage us to do our best. He was just really fun to talk to. A really cool guy.

“Fremont is successful to this day in cross country because of two words: Rich Tompkins,” Zerfas added.