Muskegon Risers fall in special indoor soccer exhibition, but everyone is pleased with the experience 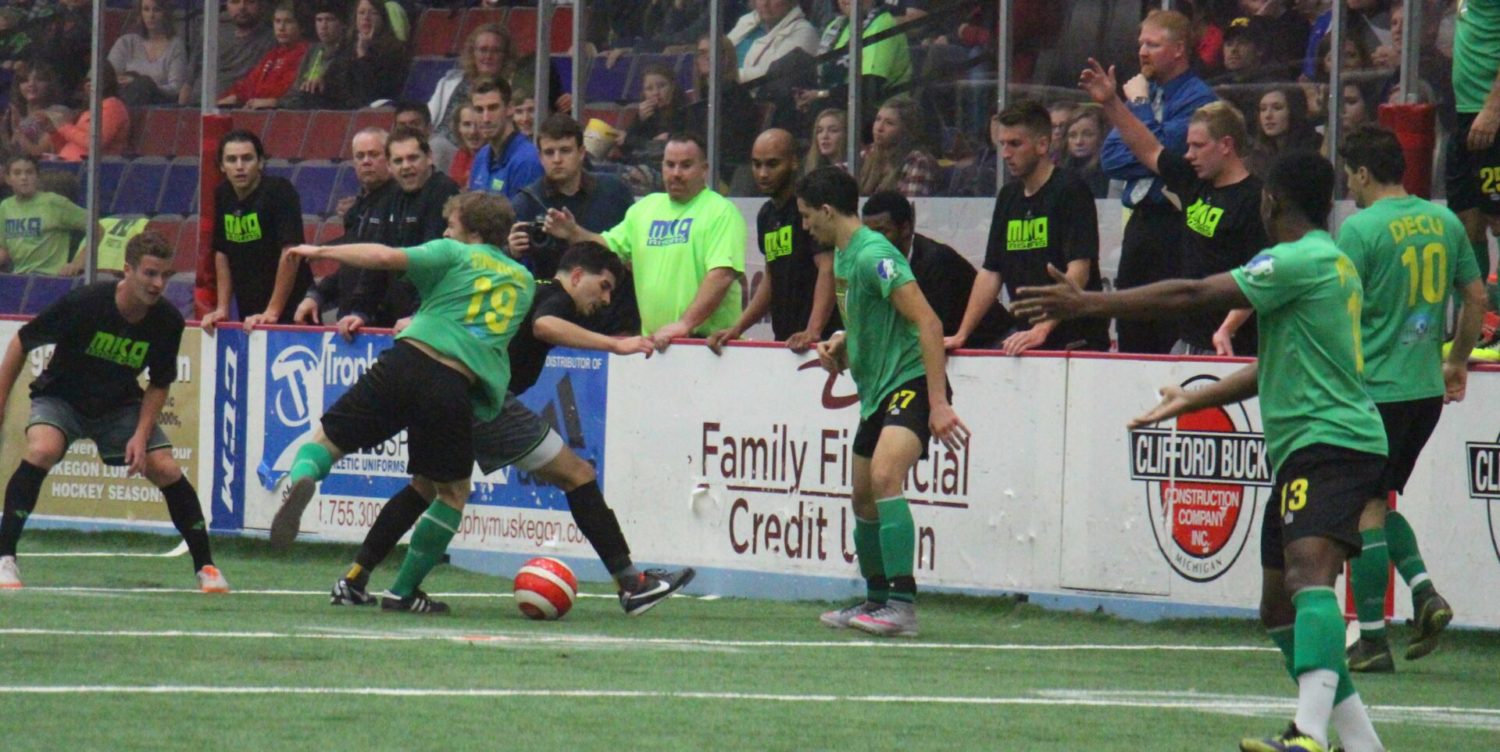 MUSKEGON – Muskegon’s L.C. Walker Arena has hosted its share of history over the last 55-years.

It has hosted political leaders, concerts, arena football, and hockey throughout it’s history, but Saturday marked a new first.

After a successful inaugural season outdoors, the Muskegon Risers SC brought arena soccer to the lakeshore for the very first time with a special winter exhibition game. 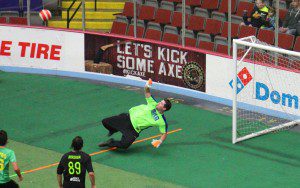 Tyler Lane makes the save for Muskegon. Photo/Jason Goorman

On the field, the Risers stormed back from a late deficit, but came up short to Detroit Waza Flo 7-6. Off the field, the event was a great success, according to Risers founder/owner Matt Schmitt.

“That happened before the game even started. (During the game) I expect every one of our players to just go out there and compete, which we did and we put on a show.”

The Muskegon roster consisted of players from around the U.S, but featured a handful from this area.

One of those players was Grand Haven and Oakland University graduate Jake Vanderlaan.

After his successful college soccer career, Vanderlaan saw the opportunity to play close to home and jumped at the chance.

“It was phenomenal,” Vanderlaan said. “We were warming up and there was a decent amount of people here, that’s what I thought it was going to be. 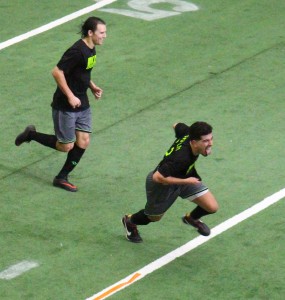 Miguel Angeles celebrates after scoring for the Risers. Photo/Jason Goorman

“Then I come out of the tunnel and there’s an amazing crowd. We came together, we hadn’t practiced together, so it was cool to see as the game went on, we developed more flow. It was a fun experience.”

Unlike traditional outdoor soccer, the arena game was made up of four 15-minute quarters.

Less than eight minutes into the game, Riser forward Miguel Angeles scored the first arena goal in Muskegon soccer history after deking past a defenseman and blasting a shot past the Waza Flo goalkeeper from 10 yards out.

Just before the first quarter ended, Detroit’s Zach Bowman drilled a shot from 15 yards out past Muskegon goalkeepe Tyler Lane to tie the game 1-1.

Detroit went into halftime with a 3-2 lead with goals from team owner/player Dominic Scicluna and former Riser Titus Koso. Angeles scored the lone Muskegon second quarter goal on his own rebound after a perfect centering pass from Jeff McClure.

Agneles scored his third goal of the night 7:41 into the third quarter, tying the score at 3-3.

Scicluna and Joey Tinnion scored the next two goals to put Waza Flo up 5-3 early in the fourth quarter.

Muskegon’s Robby Gunderson got the Risers within a goal with 10:54 to play, but Tinnion scored 1:03 later to extend the Detroit lead to two goals, 6-4.

Exactly one minute later, Bowman scored his second of the night to put Detroit up 7-4.

With frustration and determination building, Muskegon’s Byrone Matthews scored to make it 7-5 with just 3:44 remaining. 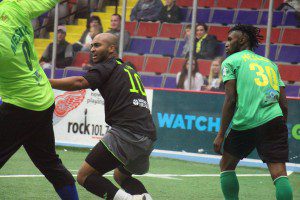 The Risers’ No. 10 Jeff McClure reacts after getting pulled down by Detroit’s Titus Koso. Photo/Jason Goorman

Just 32 seconds later, Gunderson set up McClure for a goal to close the gap to 7-6.

That wasn’t enough to win the game, but that didn’t matter as much as the excitement of the game, which seemed to go over well with the crowd.

“Amazing, I thought it was great,” said Muskegon Community College soccer coach Ben Ritsema, who served as the Risers coach on Saturday. “You’d like to win, but when you’re playing a team as established as Waza Flo…

“I thought we hung great, our guys gave a lot of effort, I couldn’t be more happy. I had a great time and I know the guys did, too.

“First ever indoor game at L.C. Walker Arena, I hope it’s the first of many. The atmosphere was great, the fans were great, I hope we do another one. It was great, I had a great time.”