To complicate things further, Muskegon was playing without leading scorer Rem Pitlick, who is at the World Junior Championships, and Matej Paulovic, who remains sidelined with a broken finger. 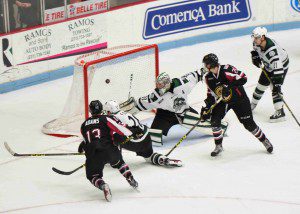 It wasn’t always pretty, but with the deck stacked against them, the Lumberjacks leaned on their grit and determination to upset the RoughRiders 4-3 in overtime in front of 1,672 enthusiastic fans at L..C. Walker Arena.

Collin Adams scored the game-winner 1:02 into the extra session.

“It’s pretty from a standpoint that we got two points in our own building,” said Lumberjacks Coach Todd Krygier, whose team won for the first time this year when it didn’t score the first goal. “We had a 3-1 lead that turned into a 4-3 (deficit) in the second period, which is pretty frustrating from my standpoint.

“I challenged the guys to come back in the third and they did an excellent job finding a way to come back and end up winning the game.”

With Pitlick out of the lineup, Adams shifted from wing to center, a move that appears to suit him just fine.

Adams notched an assist in the second period before scoring the game-winning in overtime. 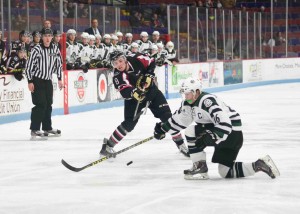 Zack Berzolla (8) fires a shot from the point. (Photo/Eric Sturr)

“He’s a terrific hockey player, he’s really been coachable,” Krygier said of Adams. “He’s worked at both ends of the rink on his game.

“I’m really proud of the way he’s playing, he’s just got to keep working, he can’t take nights off. That’s the big difference between midget hockey and the USHL, there’s never a shift or time to take off and he’s really adjusting well.”

The RoughRiders, who came into the game nine points ahead of Musikegon in the Eastern Conference standings, did not take long to flex their scoring muscle. Just 3:24 into the game, Hugh McGing scored his first of three goals on the night, getting to the top of the crease and slipping the puck past Muskegon netminder Joey Daccord.

At the 4:01 mark of the first period, Muskegon’s Logan Drevitch tied the score less than a minute later when he intercepted a crossing pass between the faceoff circles and wristed a shot past Cedar Rapids’ star goaltender Benjamin Blacker.

Max Humitz scored his second goal of the year at 12:46 of the first period to give the Lumberjacks a 2-1 lead heading into the locker room.

The second period started out well for the Jacks. 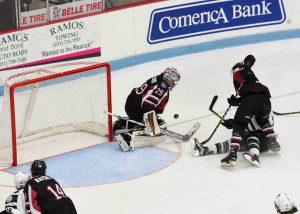 At 5:26, Dante Palecco made a cross-ice pass to Adams, who blasted a shot that Blacker saved, but Trevor Hamilton popped in the rebound and gave the Jacks a 3-1 lead.

The good times came to an end when Muskegon’s Will Graber took a controversial holding penalty at 8:17 of the middle frame.

McGing took advantage of the power play 1:28 later, scoring his second goal of the night with a sharp wrist shot from the top of the left circle after Taylor Brierley saucered the puck along the blue line.

Cedar Rapids tied the game at 17:50 when Tyler Irvine poked the puck up ice to Zac Robbins, who didn’t miss on a breakaway.

McGing completed his hat-trick 58 seconds later to give Cedar Rapids a 4-3 lead going into the final period.

The third period was uneventful until the 18:04 mark. That’s when Lumberjack (and former RoughRider) Derek Daschke set up Robbie DeMontis, who in turn fed a perfect cross-ice pass to Mitch Eliot, who one-timed it past Blacker to tie the game and send it into overtime.

Early in the overtime, DeMontis put a slap shot on net and Adams snapped home the rebound just after a power play expired.