Connor Jeffner hit a triple at the buzzer at the end of the second quarter, giving Grand Haven a 31-17 lead at halftime. 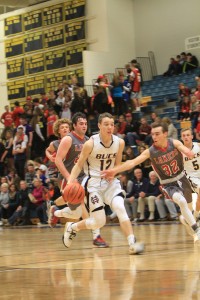 The Bucs scored the first five points of the third quarter, led 47-26 after at the break and cruised from there.

Grand Haven had a 37-31 advantage in rebounding.

The victory was a team effort for Grand Haven, which had 10 different players record at least one point.

Spring Lake was hurt by 1-for-17 shooting from 3-point range and 19 turnovers.

“Hats off to Grand Haven,” said Spring Lake Coach Bill Core. “I told the kids, win or lose, it’s a bragging game. They won bragging rights for the next 364 days. We will be a much better team in March than we were tonight.”

Tim Genson’s legacy is one of longevity, success at Mason County Central