MUSKEGON – Suddenly no lead is safe for the Muskegon Lumberjacks.

They’ve been ahead in each of their last three games, but only have one win to show for it.

The latest disappointment came on Thursday, when the Jacks grabbed an early 2-1 lead, then collapsed and lost 8-4 to the Chicago Steel in front of 1,662 fans at L.C. Walker Arena. 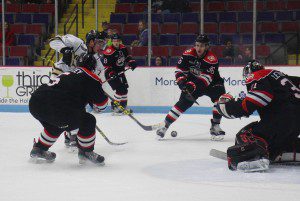 No. 12 Dominick Sacco gets the shot off infront of Chicago goalie John Lethemon. Photo/Jason Goorman

On Tuesday, the Lumberjacks blew a two-goal lead late in the game, but luckily pulled out a victory over Youngstown in an overtime shootout.

On Wednesday the Jacks surrendered two three-goal leads and dropped a 7-4 decision to the Team USA Under-17 squad.

Adding insult to injury, the Under-17 squad and Chicago are two of the lesser teams in the United States Hockey League so far this season.

So why are the Lumberjacks, now 12-11-3 on the season, having so much trouble finishing what they start?

“I thought we were going to get back on the right track, but we have guys not focused on getting their jobs done,” said Muskegon Coach Todd Krygier. “Maybe they are not capable of playing at this level. That’s what it’s coming down to.

Going into the game, Chicago seemed like a likely victim for the Lumberjacks. 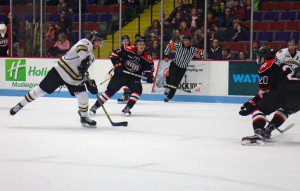 The Steel came in on a five-game losing streak and had only scored seven goals in that span.

But Chicago ended its drought by scoring two goals in the first period, three in the second and three in the third.

The Steel are also the second-most penalized team in the league, and handed the Jacks six power play opportunities. But Muskegon squandered four of those chances, allowing Chicago to pull away.

Part of the problem was a flurry of short-range goals given up by the Lumberjacks. On too many occasions Muskegon goalie Joey Daccord was left at the mercy of nearby Chicago snipers, with little assistance from the defense.

“Our guys are standing right next to them,” Krygier said about the defensive breakdowns. “We haven’t been out of defensive position any time a goal has been scored, but we don’t pick up the guys we’re supposed to pick up. It’s absolutely ridiculous because we drill on this stuff over and over in practice.”

The lone bright spot for Muskegon was the play of leading scorer Rem Pitlick, who scored two goals to bring his total to 18 on the season, and added an assist.

Pitlick extended his goal-scoring streak to eight games and his point streak to 10. 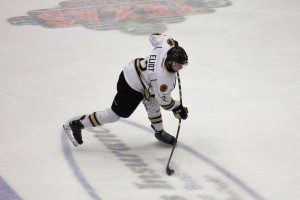 No. 2 Mitch Eliot on the Lumberjack slap shot. Photo/Jason Goorman

The Steel opened the scoring at 10:45 of the first period on a goal from Jake Jaremko.

The Lumberjacks responded 48 seconds later on a power play goal from Pitlick, with assists from Trevor Hamilton and Collin Adams.

Mitch Eliot gave the Lumberjacks the lead with a power play goal at 16:24 of the first period. Robbie DeMontis and Dante Palecco were credited with assists.

Then the Steel broke the game open with five unanswered goals.

Laczynski scored at 17:42 of the first period to tie the game 2-2 heading into the first intermission.

The Steel added three second period goals – from Marc Johnstone, Ruslan Rakhmatov and Max Zimmer – to take a 5-2 at the second break.

Brandon Duhaime added a goal at 2:04 of the third period to give the Steel a 6-2 lead.

The Lumberjacks got third period goals from Pitlick and Palecco, but Chicago answered with two goals from Laczynski, who collected a hat trick and sealed the victory for his team.