No Mr. Basketball, no problem for the Muskegon High School boys basketball team.

The Big Reds used this week’s Meijer Hall of Fame Classic tournament to show that just because Deshaun Thrower and Deyonta Davis have moved on to Division I college basketball, Muskegon still has a well-rounded, deep team with the potential to make another long tournament run. 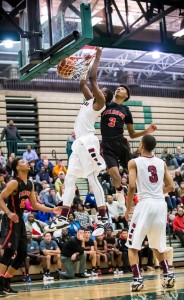 Muskegon sprinted to a 14-2 lead and never looked back in a surprisingly easy 56-33 victory over rival East Kentwood in Wednesday’s final game of the 14th annual event at Reeths-Puffer High School.

Michael Littlejohn set the pace with two early 3-pointers and finished with a team-high 18 points for Muskegon (3-0), which knocked off Detroit Consortium in Tuesday’s second game. Junior forward Jermayne Golidy scored 10 points and Desi Stephens and Anthony Bethea added nine points each for the Big Reds.

Muskegon, which featured the state’s past two Mr. Basketball winners in Deshaun Thrower (2014) and Deyonta Davis (2015) the last two winters, did not allow an East Kentwood player to reach double figures in scoring. Curtis LaGrone led the Falcons with nine points while Micah Rosser, the hero of last year’s EK victory over Muskegon, was limited to four points.

For the second night in a row, the Meijer tournament’s opening game came down to the wire. Lansing Sexton, after losing on a banked-in, 3-pointer on Tuesday against East Kentwood, escaped with a 47-46 win over Grand Rapids Ottawa Hills on Wednesday. 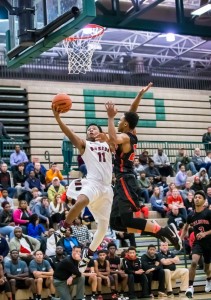 The Meijer Hall of Fame Classic ranks among the longest-running Christmas tournaments in the state of Michigan. Thanks to an outstanding group of volunteers that help stage the games, the Classic has been able to return well over $120,000 to the participating programs.

The Big Reds will complete their three-game holiday challenge at home on Saturday in the final of three games in the Muskegon Showcase event at Redmond-Potter Gymnasium. Muskegon tips off against elite prep school Chicago Whitney Young at 7 p.m.

Hesperia advances to district finals after cruising past Hart in semis