The rematch is set between Muskegon and East Kentwood in Wednesday’s championship game at the Meijer Muskegon Area Sports Hall of Fame Classic at Reeths-Puffer High School.

The Big Reds earned their spot in the 7:30 p.m. showdown with a 74-67 victory over Detroit Consortium at Reeths-Puffer High School on Tuesday.

Muskegon (2-0) looked like it was going to rout Consortium, racing out to a 20-5 lead after the first quarter.

But Consortium (2-2), which won the Class C state championship in 2014 and advanced to the Class B regional finals last winter, did not give up. The Cougars cut their deficit to 40-35 late in the third quarter and to 69-63 late in the fourth, after Muskegon started clearing its bench a bit too early.

But the Big Reds held on down the stretch for the win.

The Big Reds played under the direction of assistant coach Maurice Sain. Muskegon head coach Keith Guy received two technical fouls in the Big Reds’ season-opening win over Rockford earlier this month and had to sit out Tuesday’s game.

Guy will be back on the bench for Wednesday’s game against East Kentwood. 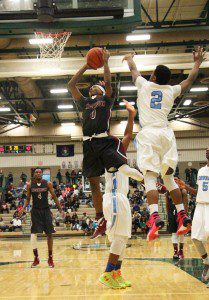 Michael Littlejohn goes to the hoop against Consortium’s No. 2 Luster Johnson. Photo/Jason Goorman

Muskegon was led by its senior backcourt of Michael Littlejohn with 24 points and four rebounds and Linwood Lee with 18 points and five rebounds. Desi Stephens was also in double figures with 10 points and a team-high eight rebounds.

Consortium was paced by seniors Charles Figueroa with 20 points and Luster Johnson with 15.

It took a miraculous shot for East Kentwood (3-0) to prevail over winless Lansing Sexton in Tuesday’s opener.

Kentwood senior Brandon Fuller banked in a 3-pointer as time expired to lift the Falcons to a 51-49 victory over Sexton, which is coached by former Michigan State standout Carlton Valentine, the father of current MSU All-American candidate Denzel Valentine.

The Meijer Hall of Fame Classic ranks among the longest-running Christmas tournaments in the state of Michigan. Thanks to an outstanding group of volunteers that help stage the games, the Classic has been able to return well over $120,000 to the participating programs.

The Big Reds will complete their three-game holiday challenge at home on Saturday in the last of three games in the Muskegon Showcase event at Redmond-Potter Gymnasium. Muskegon will team off against elite prep school Chicago Whitney Young at 7 p.m.