The Ravenna boys basketball team got its second win of the season with a 46-42 win over a good Hesperia team on Tuesday.

The Bulldogs came out neck and neck with Hesperia in the first half, trailing 12-11 after one quarter but leading 27-22 lead at halftime. 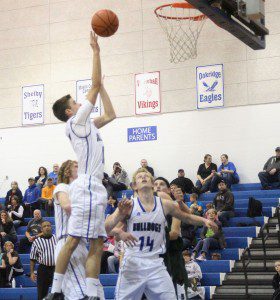 Hesperia was able to tie the score 38-38 with six minutes to play in the fourth but Ravenna’s defense stepped up.

The Bulldogs went on a 7-2 run to take a 45-40 lead with four minutes left and limited Hesperia to just two free throws from that point on.

Nick Castenholz provided the spark for Ravenna with an eight-point second quarter outburst and finished with 15 points, three rebounds, two steals and two assists. The senior hit a pair of 3-pointers to put Ravenna up 22-15 midway through the quarter.

David Thompson also helped in the second, getting five of his nine points to help Ravenna for a halftime lead. Thompson, a junior, also grabbed seven rebounds along with two blocks, one steal and an assist on the night.

“In the second quarter, it was really picking up the intensity defensively that got us out running a little bit,” said second -year Ravenna coach Justin Johnson. “Our ball movement was pretty good (in the second quarter) and David got his buckets in transition.”

“You could see the confidence building,” said Johnson about his team’s fourth quarter. “That (run) really put a little more of a fire in our team.”