MUSKEGON – It looks like the Spring Lake girls basketball team is picking up right where it left off last season.

The Lakers finished 2014-15 with a 20-0 regular season, the three wins in districts, before losing to Sparta in the regional semifinals.

Apparently little has changed since then.

On Tuesday, the Lakers opened the season with a 42-point ponding of  Tri-County on the road.

The domination continued on Friday as Spring Lake cruised past host Muskegon Catholic 62-14 in the Lakes 8 Conference opener for both teams.

“They played well together today,” said Spring Lake Coach Cavin Mohrhardt, the school’s athletic director who is returning to the coaching ranks this year after a lengthy time away.  “We did the things that we needed to do.

“We stress defense and we have played two games that have been good, but our tests are coming up.” 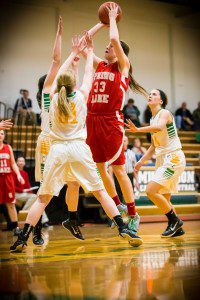 Sophomore guard Reiko Johnson led the Lakers with a game-high 19 points, including 17 the first half.

Remi French and Sophia Conroy added eight points each for the Lakers, who had 11 players record points on the score sheet.

“We have to look at it one game at a time,” said Johnson, who has been a standout for Spring Lake since taking the court as a freshman last season. “I’m thinking these early blow out games will motivate us and help a lot in the long run.”

The Crusaders struck first with a three-point basket from sophomore Isabelle Bertolone, 20 seconds into the game, but that would be their only lead in the game.

The Lakers responded by scoring 19 straight points to take a 19-3 lead after the first quarter.  Johnson led the Lakers with nine points in the opening frame.

Spring Lake continued its fireworks in the second quarter, scoring the first eight points to close out a 27-0 run that ended by a free throw from Zoie Price with 6:21 left in the first half.

The Lakers closed the game by scoring four of the six points scored in the fourth quarter.

“We had way too many turnovers,” said MCC coach Matt Callow. “I told them that we needed to keep fighting because we are building skills for future games.”

Risers wake up in the second half, beat Fort Wayne 3-2 in their second home game