Making one-handed football catches, swinging a baseball bat, and pulling back a bow during deer season are just a little more impressive when they’re done by Karson Kriger.

They’re all second nature now for Kriger, because he’s been doing each for several years. But when those who don’t know him — such as opponents on the playing field — see the Fruitport High School junior in action, it can often be eye-opening and inspirational.

And now that Kriger has started competing at the varsity level, more and more watchful eyes are beginning to take notice of the one-armed athlete at Fruitport. 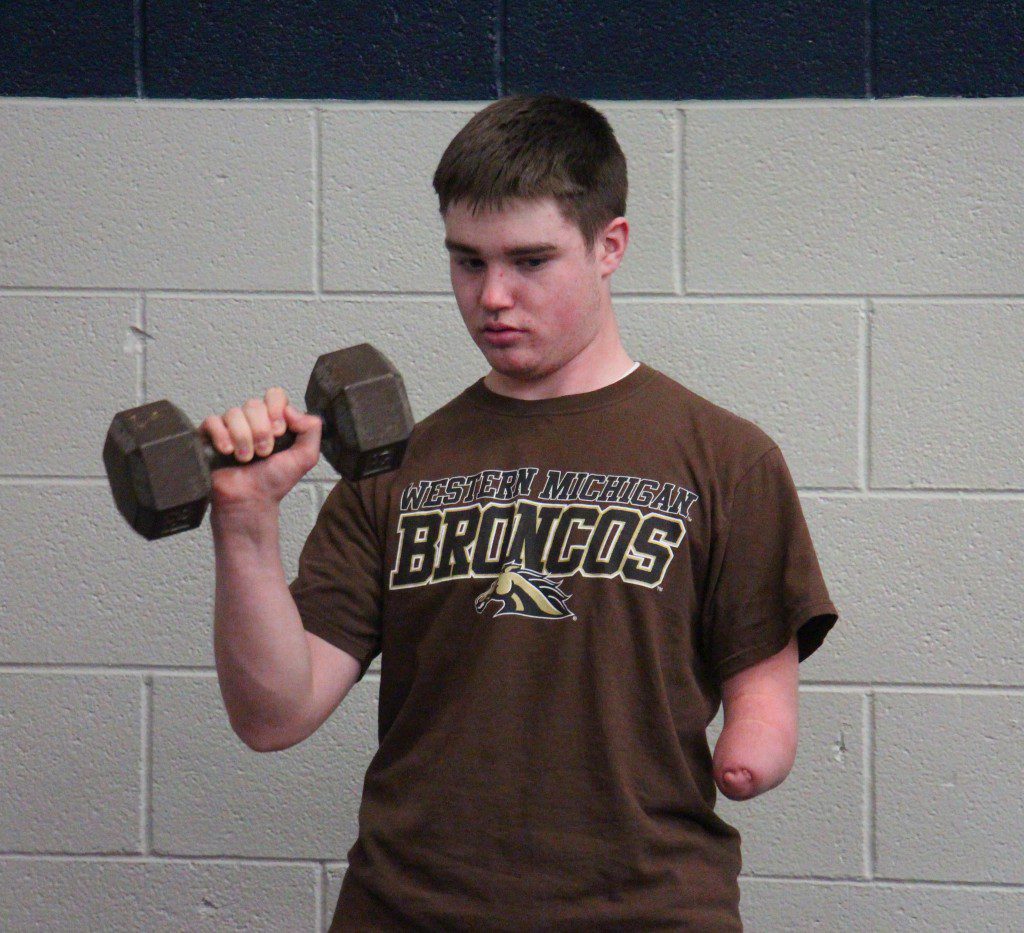 Kriger lost most his left arm at birth — about 2-3 inches below his elbow — due to complications from Amniotic Band Syndrome. The condition occurs when the fetus becomes entangled in fibrous string-like amniotic bands in the womb, which restricts blood flow and affects the baby’s development.

For Kriger, living with one arm meant that a regular, daily routine would always be filled with certain challenges and frustrations, but it never meant that he was going to be held back or destined for the sidelines.

“I started playing soccer when I was about four, then football at five and baseball at the same age,” Kriger told Local Sports Journal. “I’ve been using (a prosthetic arm) in baseball for about 10 years, so I’m pretty used to it.”

The prosthetic is held in place with a harness around his shoulders and the arm piece is secured to his stub on his left arm, Kriger explains.

“It grips on the bat and I’ll just flip it off after I swing,” he said.  “I just flip it over my head if I need to run to first base.” 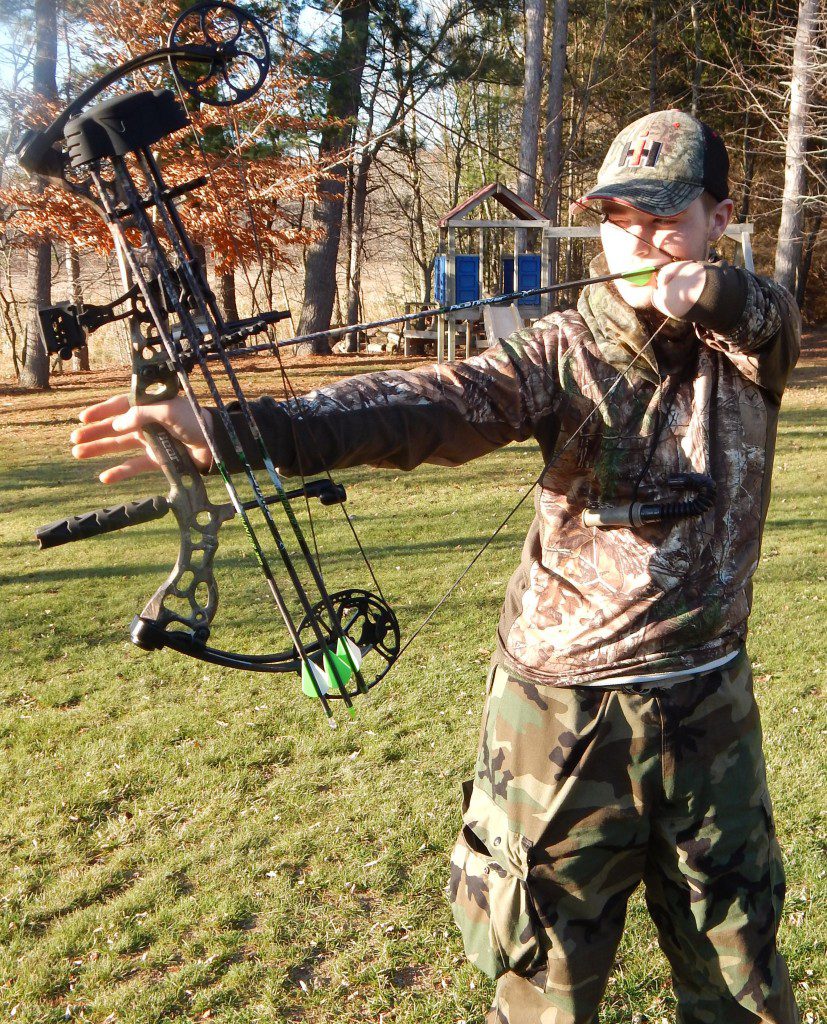 Karson Kriger pulls back his bow and arrow during a practice session.

Both father and son laugh about it now, but when Karson first started flipping his prosthetic to the ground, some opposing players would stare in shock or disbelief at what was happening on the field.

“I don’t mind joking around about it,” Kriger said. “It’s not like I can change things at the end of the day when I come home. I might as well have some fun with it.”

Kriger has always been encouraged to play sports, despite his challenge, because they are a big part of his family, which includes father Ken, mother Kristi, and sister Kaitlyn, 11.

Ken Kriger was a multi-sport athlete during his playing days in the mid-80s at Fruitport High School, as was his brother, Len. Karson fondly recalls watching his older cousin Nathan star on the football field in recent years at Fruitport, and being able to meet the players and give high fives in the locker room after Trojan victories.

“I’ve always encouraged my kids to get involved with athletics and let them do what they want, what they enjoy,” Ken Kriger said. “I’ve always tried to encourage Karson, but not try to be too pushy. I want him to learn on his own. But when I try to demonstrate something, I try to think, ‘What would I do without my lower left arm?'”

Ken said his son finds ways to accomplish feats that seem impossible for someone with one arm, such as bow hunting. Karson uses a left-handed bow, and has enough strength and coordination to pull the string back and shoot with his stub on his left. 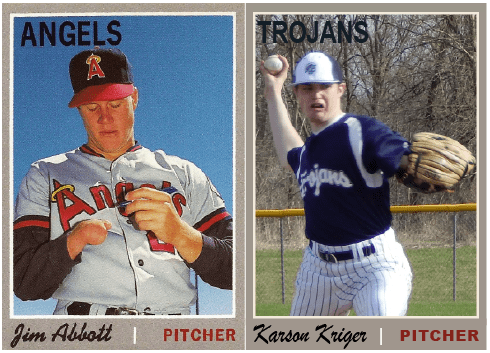 He had a strong season on the Trojans’ junior varsity team last year, and after being called up to varsity at tournament time, Kriger now has his sights set on earning a role in the Trojans’ pitching rotation this spring.

To reach that goal, Kriger plans on working with Fruitport varsity baseball coach Nick Reed this winter. That includes building strength in the weight room and working on his repertoire of pitches.

“I’m going to be working on adding a few more miles per hour to my fastball and working on a change-up,” Kriger said. 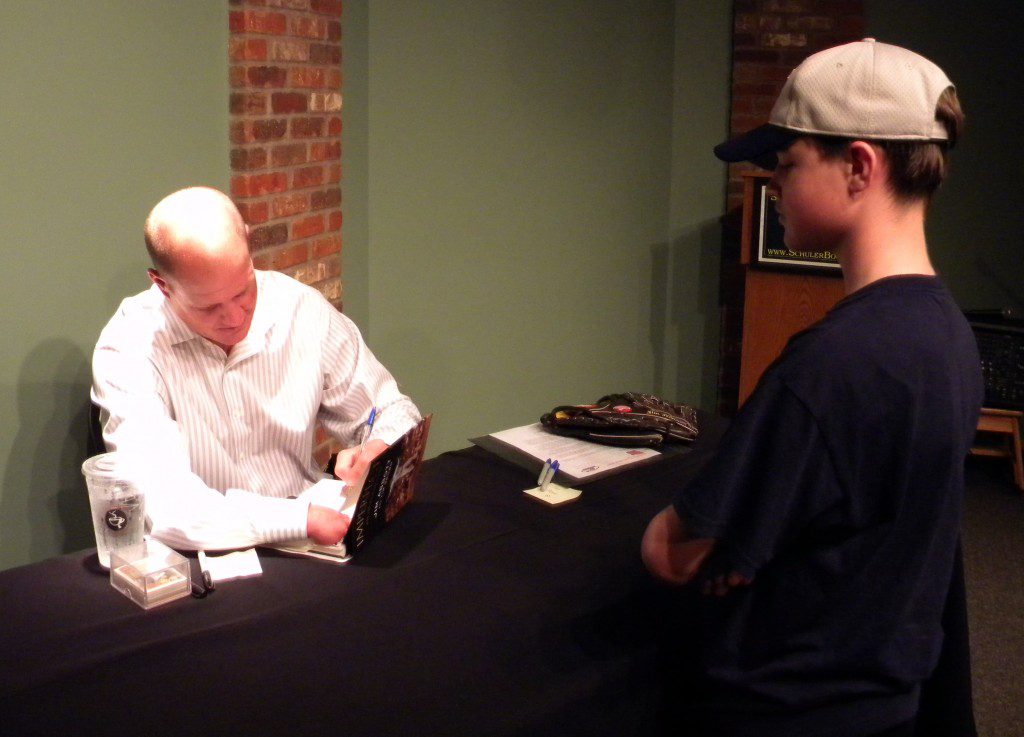 Kriger, then 13, gets Jim Abbott’s autograph at a book signing by the former big league pitcher.

“He’s an extremely hard worker and works to get better,” Reed said. “I have had the opportunity to coach him in football as a freshman and in off-season workouts. He’s truly a kid that doesn’t let his condition affect his outlook and work ethic. He strives to be the best and embraces it.”

Abbott, who grew up in Flint and played baseball at the University of Michigan and for 10 seasons in the Major Leagues, was born without his right arm. That handicap didn’t deter him from enjoying a successful career, which included a no-hitter as a starter with the New York Yankees in 1993.

Kriger had an opportunity to meet Abbott and take a few photos with him a couple years ago at a book signing. Ken Kriger said it was special to see Abbott pay a little extra attention to his son.

“He told me not to let anyone dictate the player that I want to become,” Kriger recalled. “He told me to keep trying new things and not let anyone set me back.” 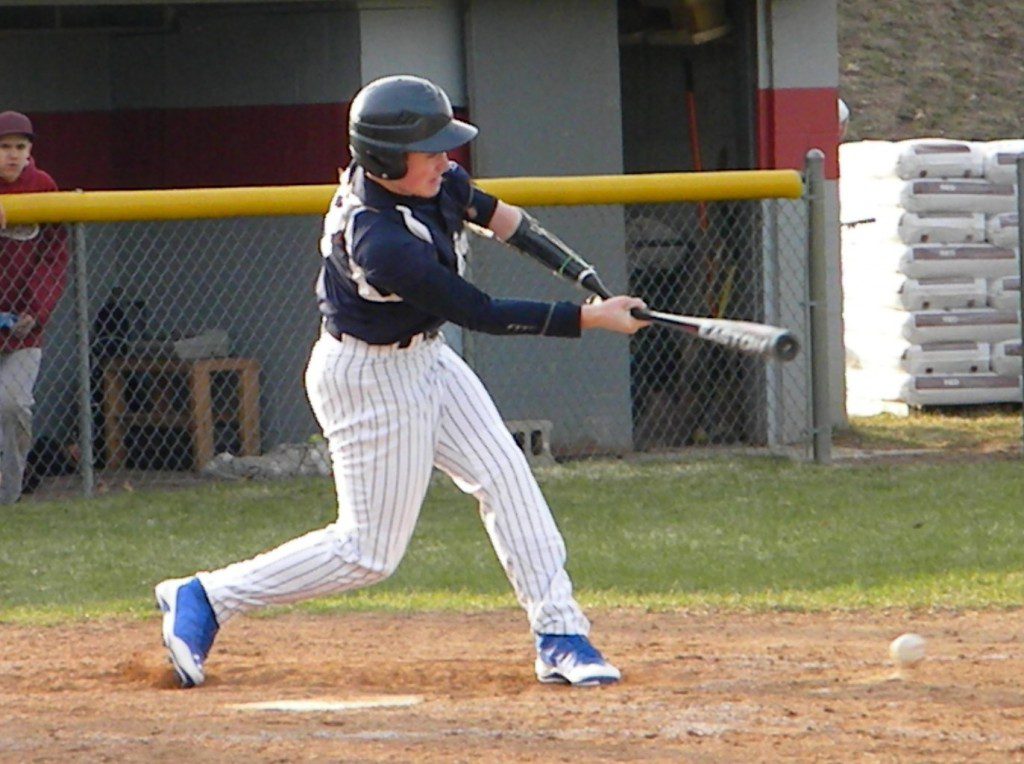 It’s a message Kriger has always kept close to his heart.

Recently, he was asked by representatives of Mary Free Bed Rehabilitation Hospital in Grand Rapids to act as a mentor to children dealing with the loss of limbs or other handicaps.

“I spoke with one little girl who was afraid to show her arm to other kids,” Kriger said. “I just tried to tell her that she shouldn’t be ashamed by it at all and that she could keep playing.

“It kind of boosts my confidence being able to do something like that,” he added. “If I can help others and make them feel better about themselves, that makes me feel good, too.”

Gains on the gridiron 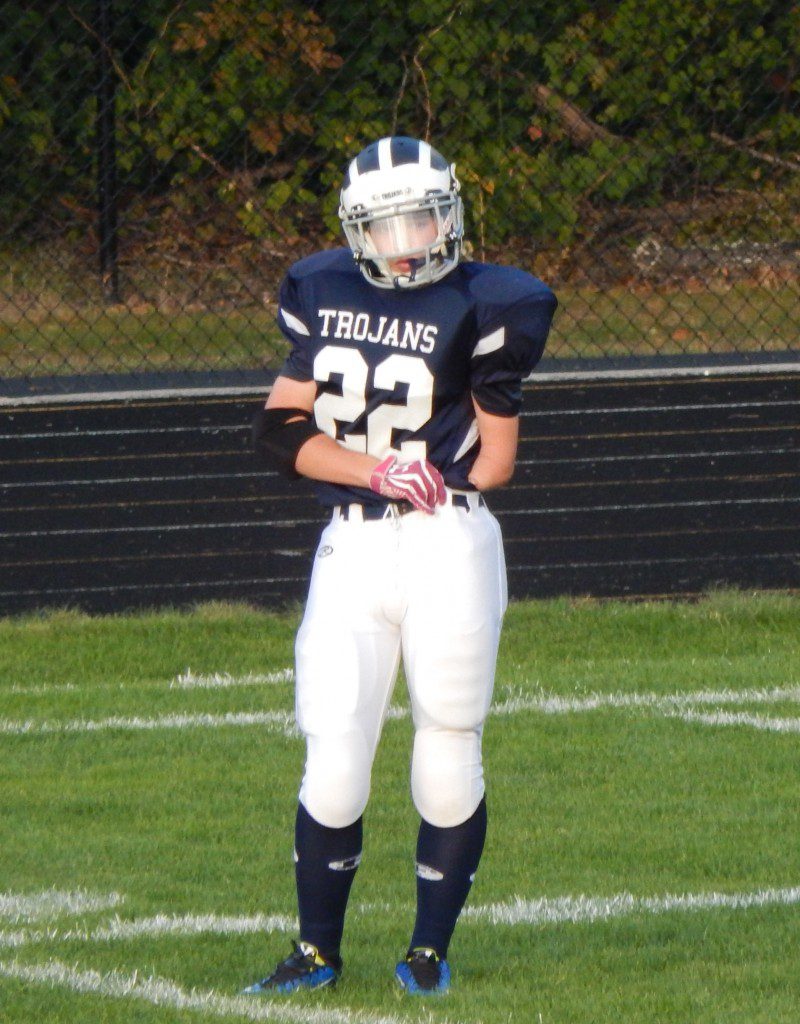 Of all the sports he’s played – including basketball – Kriger said football is filled with the most challenges. Wrapping up on tackles, hauling in catches, or even positioning his body properly to ensure a solid block, is understandably much tougher for a player with one arm.

Still, Jarod Wierengo, Fruitport’s senior quarterback in the fall, said he can’t remember a time in practice when Kriger struggled to catch the ball.

“More than anything, his positive attitude is what stands out about him,” said Greg Vargas, Fruitport’s varsity football coach. “We’d often work on bubble screens in practice and when he’s going to his left, that’s tough for him because he has to maneuver his body to make the catch. But he doesn’t shy away from that.

“He knows he’s going to struggle, but he doesn’t feel sorry for himself. He’s just keeps working at it.”

With a senior-heavy roster, Kriger was used primarily on the scout team this season, but saw some action at linebacker and tight end.

“I got on the field in some of our big wins,” he said. “This offseason, I really want to work on getting stronger and improving my agility and hopefully I can earn a starting spot. If it doesn’t happen, I’ll just push everyone else to get better. I want to be a leader on and off the field.”

Although he doesn’t really consider himself a role model, Kriger has proven to be inspirational to others who have never crossed paths with him before.

“I’ve coached Karson in baseball and football when he was younger and I’ve had quite a few coaches stop and talk or ask a lot of questions,” Ken Kriger said. “They’re curious.

“For those who don’t see it all the time, it’s something new, or unique. And I’ve had several parents come up to me and say it’s great to see him involved and that he doesn’t let his arm bother him.”

Vargas said he hopes Kriger is a key member on the varsity football roster next season, simply because of his positive attitude and heart.

“He’s been through every phase with us. He’s lifting during the summer, he’s going to camp every year. He works his butt off at practice,” Vargas said. “He makes no apologies for his condition. That’s what I really admire about him.”

The only apologies needed, it seems, are for those who set limited expectations for kids with physical handicaps. That’s because Kriger will likely exceed them.