NORTON SHORES – It only takes one bad move, in one unfortunate moment, to ruin a promising athletic career.

The star point guard for the Mona Shores girls basketball team had just completed her sophomore year of school, and was beginning summer practices with her team. 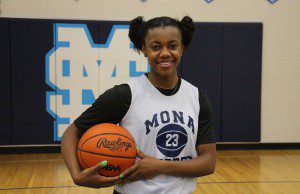 After two great seasons on varsity, her path seemed clear and the sky was the limit. She was looking forward to an easy transition into her junior season.

But at the first practice, on June 10, she encountered her first major roadblock – a torn ACL in her left knee, which put at least part of her junior season, and the quality of her performance, in potential jeopardy.

“I was running through a drill and went to make a cut to pass the ball back out, and it just popped,” Walker said. “I kind of guessed what it was, but I was still hoping and praying it wasn’t an ACL tear.

“I was crying and praying and walking around, hoping to just walk it off. But I had never had that type of pain before, so I knew it was something different.”

A quick visit to the hospital and an MRI confirmed Walker’s worst fears. She had surgery on June 18. At first her doctor predicted a return in five months, which would have put her back on the court by the end of November, well in time for the season.

Then the prognosis changed to a six-month recovery, which would have left Walker sidelined for the first few games.

Walker rejected that notion. She attacked her rehab regimen with a singular determination, working out three or four days per week, with therapists and on her own.

One regret for Walker was missing the fall volleyball season and playing one more time for Coach Dan Potts, who retired at the end of the season. But Walker had her sights firmly set on basketball court, and did not want to miss a moment.

As it turned out, she didn’t. She was back on the court in the first week of December for the season opener against a good Oakridge team, and she looked as good as ever, rolling up 19 points, nine rebounds, six assists and four steals.

She took it up a notch in December’s Best of Michigan Holiday Classic in Detroit, scoring 22 points against Williamston and 26 points against Robichaud.

She also had a huge non-league game against Jenison, totaling 26 points, 10 rebounds and six steals.

Her only less-than-average game came last Friday, when Walker was held to 12 points in a league showdown loss to Muskegon.

“I was just so anxious to get back in,” said Walker, who was the first Mona Shores girls basketball player to serve as a team co-captain as a sophomore. “I didn’t want to think about the possibility of getting hurt again. I’ve been cautious but I haven’t babied it.”

Walker’s performance has helped the state-ranked Sailors to a 6-2 start.

“Anybody who knows Jordan Walker knew she was going to work her butt off from the beginning (to get back on the court),” said Mona Shores Coach Brad Kurth. “It’s part of who she is. She’s not 100 percent yet, but when she is, that will be scary. She’s a great player.

“Any time you take six months off from competitive basketball and the running and jumping that comes with it, it’s going to take a while to come back. I’m just amazed at how far she’s come in a short time. I wasn’t expecting to have her back until mid-December. We got her back almost a month early.”

Ironically, Walker’s rehab helped her narrow down her choice of colleges. While many schools were interested in recruiting her, she said many of them fell out of touch when news of her injury spread.

But Western Michigan University never wavered, and she committed to the Broncos in September.

“I had been talking to a lot of Big 10 schools,” Walker said. “As soon as I told some of the coaches about the ACL, they said ‘Good luck.’ Not to knock any of those colleges, but Western was around for a long time, and even through (the injury) they stayed around.

“It was kind of a no-brainer. I have family down there in Kalamazoo. It’s a great town.”

Western will be getting more than a great basketball player in the fall of 2017. Walker is a 3.8 student who plans to major in political science in college. She was also among a handful of outstanding student athletes who were chosen to serve on the Michigan High School Athletic Association’s Student Advisory Council this year.

“She’s a better person that she is a player,” Kurth said. “She’s a great student who is never going to embarrass anyone’s program. She will only bring honor to any team she’s part of.

“On the basketball side, she can go right, left, shoot the ball or go to the hole. There’s not a lot of weaknesses in her game. She can have an off night shooting, but she will move on and do something else.”