Big Red practices tend to be long and intense. Guy makes it clear what he expects from the players – focus, hard work and excellence.

They admit it’s challenging to play for Guy and his assistants. They’ve run the court and executed the plays over and over in practice, only to hear Guy blow his whistle every few minutes, meaning play stops and the lectures begin.

The lectures are sometimes loud, but Guy’s points are well taken.

“He tries to make the practices harder than the games, so the games will be easier,” Lee told LocalSportsJournal.com. “Last year, at the beginning, I used to get a little down (when Guy called him out). I used to feel sorry for myself. Now I just take it and keep playing.

“You don’t pout about it. You look him in the eye when he’s talking to you, you answer his questions, you listen to what he says, and you don’t dwell on your last mistake.”

Littlejohn says the tough preparation is for more than basketball.

“He wants us to be ready for the real world and grow up to be men,” Littlejohn said. “He tries to make practices like real life, as tough as real life can be.

“He teaches you how to be a leader. You don’t pay attention to how he says things, but what he says. I know I’ve gotten tougher because of it. I know how to take things and move on.”

Guy’s coaching has clearly paid off this year for Littlejohn and Lee.

The two starting guards have been crucial point producers for the Big Reds, who only returned one starter – Littlejohn – to the lineup this season.

Guy says the outside points from his guards are crucial while the team works to develop an inside game with younger players.

“They are doing exactly what we’ve asked of them,” Guy said about the guards, who are two of the four team captains. “They both kind of need to cut down on turnovers a bit, but they play well off each other. They both know how to play both (point and shooting guard). That’s what makes it even more special.

“Michael is the most experienced player on the team. Linwood played behind him last year. He’s worked so hard this year. He’s gotten a lot stronger and more confident. Both of these guys worked hard over the summer to become the players they’ve become.”

Lee seemed destined to be a basketball standout. His father, Linwood Lee, is a teacher in Muskegon Public Schools who played and coached at the high school level in the past.

“He has played and watched a lot of basketball and he passed everything he knew on to me,” Lee said. “We used to go to the gym all the time.”

Littlejohn took a different route to the varsity. He remembers being cut from the fourth-grade basketball team, which bruised his young ego but motivated him to improve.

“I watched my friends play that season and I knew I had to work harder to make it,” Littlejohn said.

Both Littlejohn and Lee have gotten a taste of Big Red basketball glory, and they’re eager to experience it again.

As sophomores, they were called up from junior varsity for the state tournament, and were part of the historic team that went 28-0 and rolled to the Class A state championship.’

Last year both had bigger roles on the team that advanced to the state quarterfinals before being eliminated.

They learned a lot from former standouts like Deshaun Thrower, Deyonta Davis, Will Roberson and Joeviair Kennedy.

“We were right next to them on the court,” Lee said about experiencing the tournament runs with the older stars. “They were like our big brothers.”

“We want to be good like them,” Littlejohn added. “They set the standard and we want to keep it going.”

So far they and their teammates seem to be upholding the standard of excellence set by their former teammates. Muskegon is 8-3 overall and 3-0 in O-K Black Conference play. The Big Reds resume play Tuesday night at home against Grand Rapids Kenowa Hills.

But Littlejohn and Lee say there’s a lot of work to be done before the team can hope to achieve its goal of winning another state title.

“We have to stop turning the ball over so much,” Littlejohn said. “Sometimes we’re not focused as a team. We have to be focused on the job we have to do on the court.”

“Our coach does a really good job of scouting teams and doing his part,” Lee said. “If we do our part we’ll be okay.” 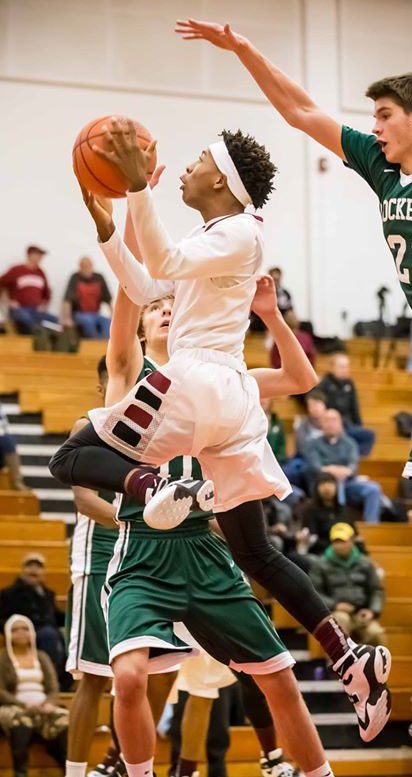 Michael Littlejohn gets up in the paint against Reeths-Puffer earlier this season. Photo/Tim Reilly 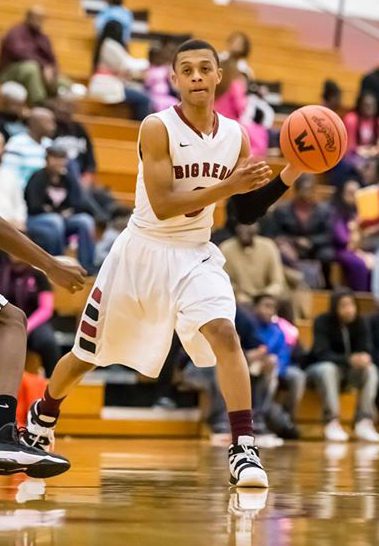