They were trailing the Team USA Under-17 squad by a goal with seven minutes left in regulation. 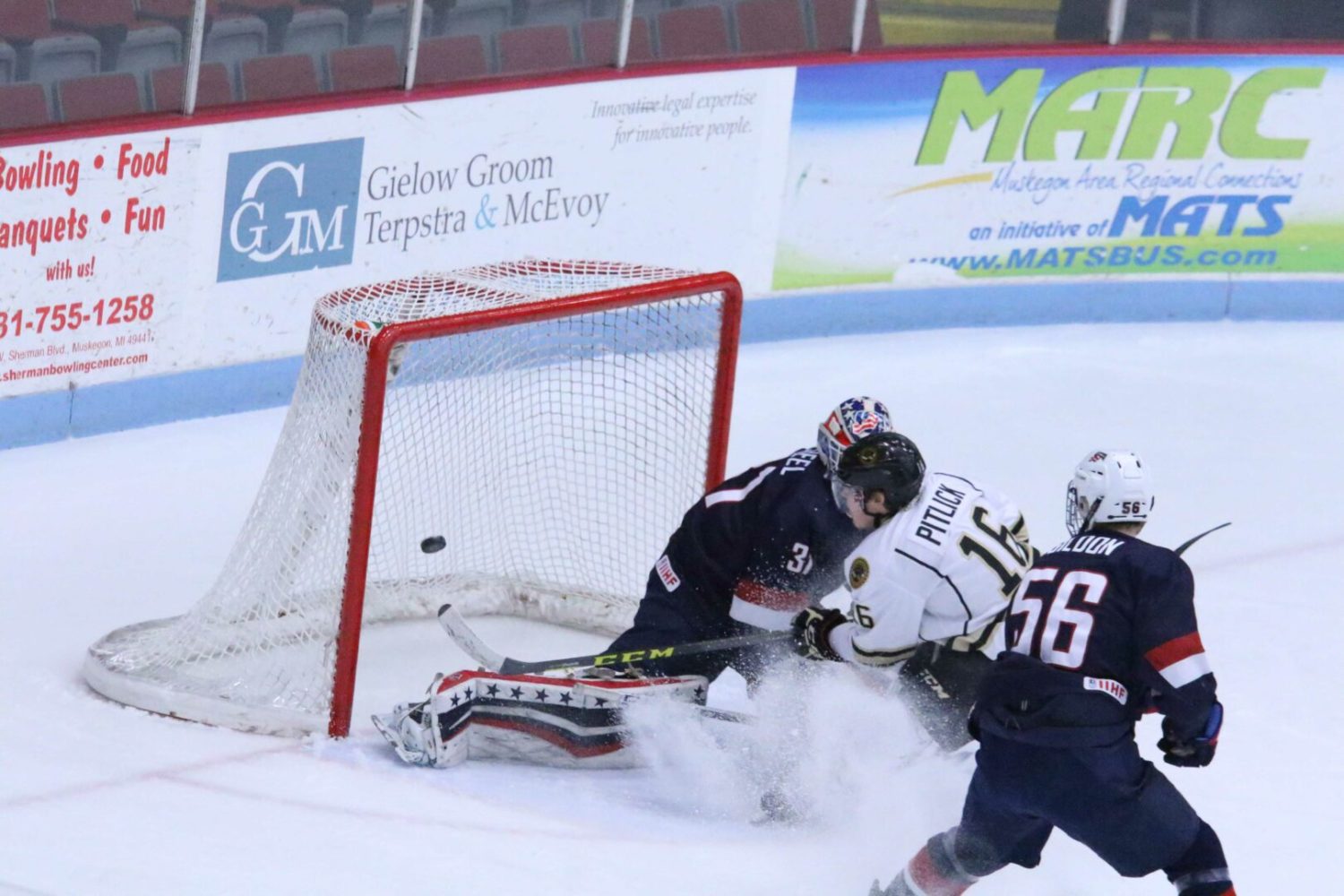 If the game had ended that way, the Jacks would have lost their fourth straight game and sixth in their past seven. It would have also been their fourth loss this season to the Under-17s, who have not beaten another USHL team this season.

Luckily the Lumberjacks snapped out of their funk just in time.

Then 1:15 into overtime, Trevor Hamilton delivered a perfect pass to Matej Paulovic, who popped in the puck from the right side of the net, giving the Lumberjacks an exciting and much-needed 5-4 victory in a special afternoon game.

Paulovic and Pitlick carried the bulk of the scoring load with two goals apiece. Max Humitz netted the other Muskegon goal.

“It’s a relief,” said Muskegon Coach Todd Krygier, whose team is now 14-14-3 on the season and currently 10 points out of a playoff spot. “We’ve had a lead in just about every game we’ve played, but guys, for whatever reasons, haven’t been great on defense. I thought today we played physical but skated hard and did a better job defensively.

“We’re the only team (that the Under-17s) have beaten – three times. I think part of it is that our guys haven’t respected them. They were putting individual efforts before team efforts. We kept addressing it, but it hasn’t gotten through until today.”

The Jacks didn’t play a great game, giving up two power goals to Team USA, plus a shorthanded goal. They kept getting one-goal leads – 1-0, 2-1 and 3-2 – before falling behind late in the contest. 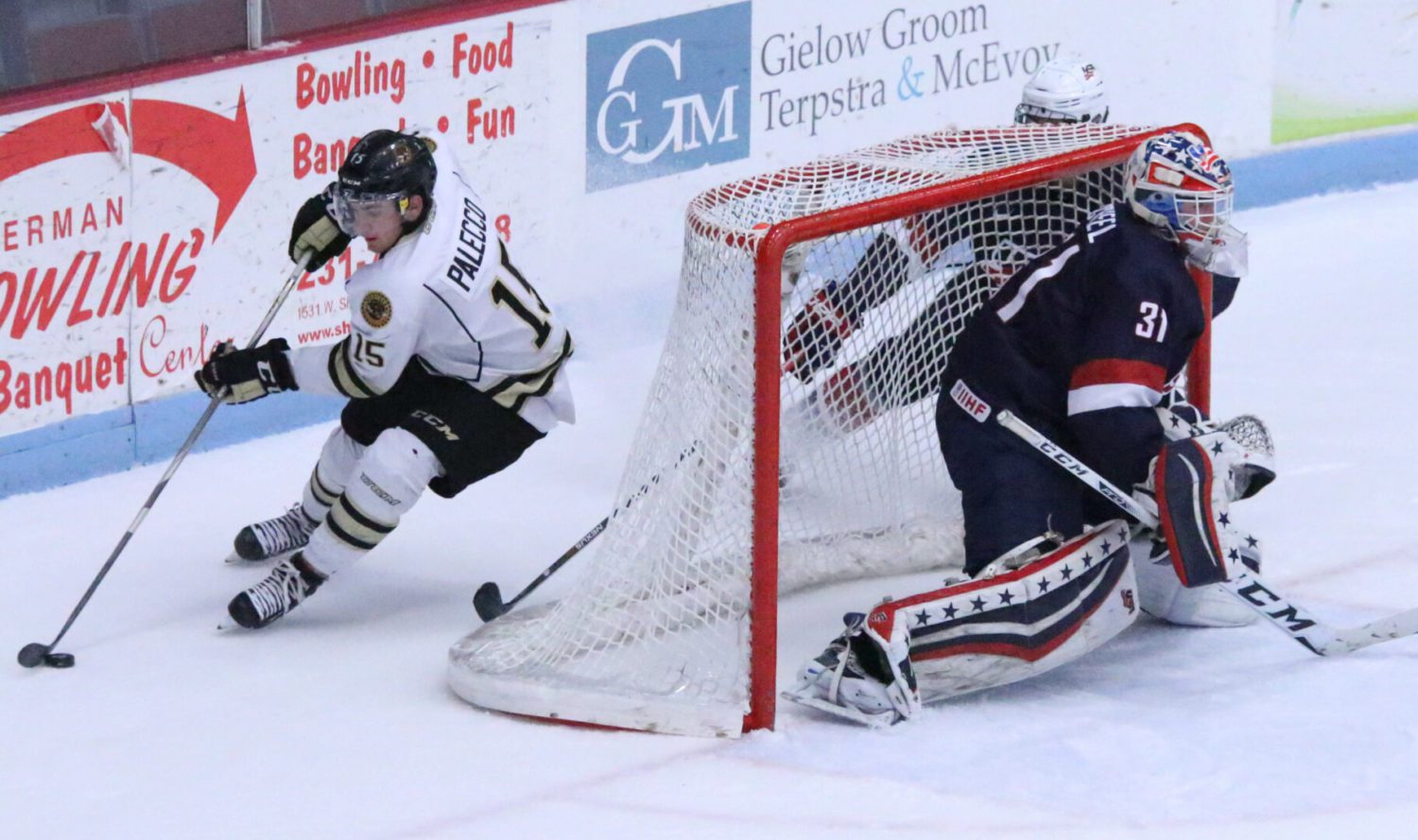 But in the end they displayed the necessary willpower to salvage the win.

Pitlick opened the scoring for the Lumberjacks at the 8:03 mark of the first period. Collin Adams picked up the lone assist on the goal.Team USA responded 1:05 later with a power play goal from David Farrance.

Muskegon regained its lead 48 seconds into the second period on a goal from Paulovic.  Adams and Pitlick assisted on the tally.

Team USA’s Sean Dhooge tied the game 2-2 at the 2:49 mark of the second period, when he stole the puck from Hamilton and scored a shorthanded goal on a breakaway.

Humitz gave the Lumberjacks a 3-2 lead with a goal 8:24 into the second period.  Will Graber assisted on the goal, while Danny DiGrande tallied his first point of the season with the secondary assist.

Team USA tied the game 3-3 with 1:34 left in the second period on a power play goal from Randy Hernandez.

Logan Cockerill gave Team USA the lead with a goal 13:04 into the third period. But Pitlick answered with his second goal about a minute later to knot the game at 4-4 and send it to overtime.

The Lumberjacks got a break at the end of regulation when Team USA was called for a high sticking penalty. That allowed Muskegon to start overtime with a two-minute power play.

The Jacks didn’t need the whole two minutes, because Paulovic delivered the winning goal just 1:15 into the extra session.

Hamilton and Adams assisted on the winner.