MUSKEGON – The Muskegon Lumberjacks have struggled in recent weeks, posting a 3-6-1 record in 10 games since the holiday break.

The struggles have pushed the Lumberjacks back to last place in the USHL’s Eastern Conference standings with a 14-15-4 record.

That convinced the Lumberjacks management to shake up the roster, and they did so in a big way on Tuesday. 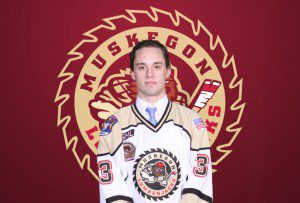 Trevor Hamilton was traded by the Lumberjacks to Chicago on Tuesday.

Gabriele and Michaud will join the Lumberjacks for their game this Saturday in Lincoln, and will be eligible to return to the team next season. Johnson will remain at prep school for the remainder of this season, and is expected to join Muskegon on a full-time basis next season.

Hamilton, an offensive-minded defenseman who had already played college hockey before returning to the USHL, was acquired by Muskegon in November 2014 from the Fargo Force.

The Lumberjacks gave up a first-round draft pick to get Hamilton, who will play at Penn State University next season.

In 44 games last season he compiled 28 points on nine goals and 19 assists.

Hamilton was named team captain at the start of the 2015-16 season, and currently has 25 points on six goals and 19 assists through 32 games.

“I think a lot of him (Hamilton) as a person and a player,” said Lumberjacks Coach Todd Krygier. “He was an absolute warrior for me and he knows how grateful I am for his efforts last year and this year.

“The purpose of the trade is for our team to get better now and for the future.”

Gabriele, a defenseman, is currently in his third season in the United States Hockey League. He has scored four goals and picked up nine assists in 38 games with Omaha and Chicago this season.

He played his first two seasons in the league with Team USA.

“He (Gabriele) is an offensive defenseman,” Krygier said. “We feel he has great skill and talent.”

Center/right wing Michaud is currently in his first season in the USHL. He had four goals and five assists in 36 games for the Steel.

Last season Michaud played in 49 games for the Portland Jr. Pirates where he notched 22 goals and 33 assists.

“He should be able to help us in secondary scoring,” Krygier said about Michaud. “He is going to have a bigger role with us than he had in Chicago. He has a good stick and will be good around the net.”

Johnson is currently playing for Shattuck St. Mary’s Prep, where he has five goals and 20 assists in 32 games this season. He is the brother of current NHL defensemen Jack Johnson of the Columbus Blue Jackets.