MUSKEGON – The last time Mona Shores and Reeths-Puffer met on the ice, no one could get the upper hand, resulting in a 3-3 tie in December.

The teams locked horns again on Wednesday, this time at L.C. Walker Arena, and again it came down to the wire between the two local rivals.

The Sailors carried a one-goal lead into the third period and withstood everything R-P could throw at them, then added an empty-net goal to seal a 4-2 victory, spoiling Parents Night for the host Rockets.

It was an important win for the Sailors, who started the season slow but sport a 3-1-1 record in O-K Tier I conference play and improved to 5-9-1 overall.

“Everybody brought it today,” said Mona Shores head coach Dan Quaine. “It was good each shift, knowing their assignments, playing their position.

“Everybody chipped in, that’s a good team win for us right there.”

It didn’t take long for the Sailors to open the scoring.

Elijah Wilson drove into the R-P zone, made a defenseman stumble, then skated down the right wing and fired a shot past R-P goalie Wil Mierz just 1:44 into the game.

The Sailors sustained forechecked effectively throughout the rest of the period and the hard work paid off.

Brandon Ledyard got mixed up in the left corner with a Reeths-Puffer defenseman, causing the puck to pop out to a waiting Sawyer Jensen.

Jensen floated the puck past Mierz to give Shores a 2-0 lead with 1:48 left in the period.

“That was difficult goal to give up,” said R-P head coach Eric Sikkenga. “Sawyer’s their best player. You can’t let their best player walk out from below the goal line all alone, he’s going to score.”

The second period started badly for the Rockets when they were called for a two-minute tripping penalty.

While playing shorthanded, however, R-P defenseman Mason Convertini poked the puck out to center ice, and Logan Homfeld took it the rest of the way, scoring on a breakaway at the 1:21 mark, cutting the Sailor lead to 2-1.

But before that penalty was over, the Sailors scored what ended up being the game winner. Zach Tilden beat Mierz stick side to extend the lead to 3-1, with Jensen getting an assist on the goal.

Reeths-Puffer’s Brody Vanderlinde scored at 16:02 of the second period to close the gap to 3-2 at the second intermission.

Six minutes into the third period, Rocket forward Trevor Fowler barreled in on goal in a shorthanded breakaway, but Sailor netminder Anthony Shrum made the save, preserving the narrow lead.

The Rockets applied heavy pressure down the stretch but were unable to solve Shrum the rest of the way.

Sailor forward Connor Edlund scored an empty-net goal with 48-seconds remaining to seal the victory. Brendan Winegar was credited with an assist.

“Both teams played hard,” Quaine said. “It came down to the wire again.” 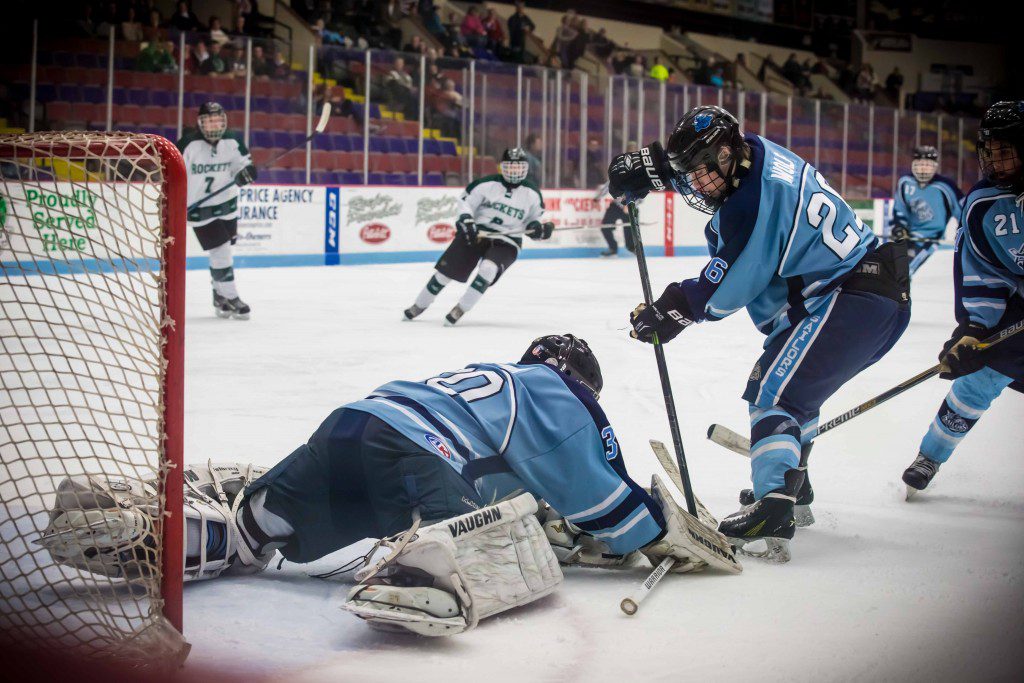 Mona Shores goalie gets on top of the puck with Anthony Shrum and No. 26 Ryan Wolf protecting. Photo/Tim Reilly 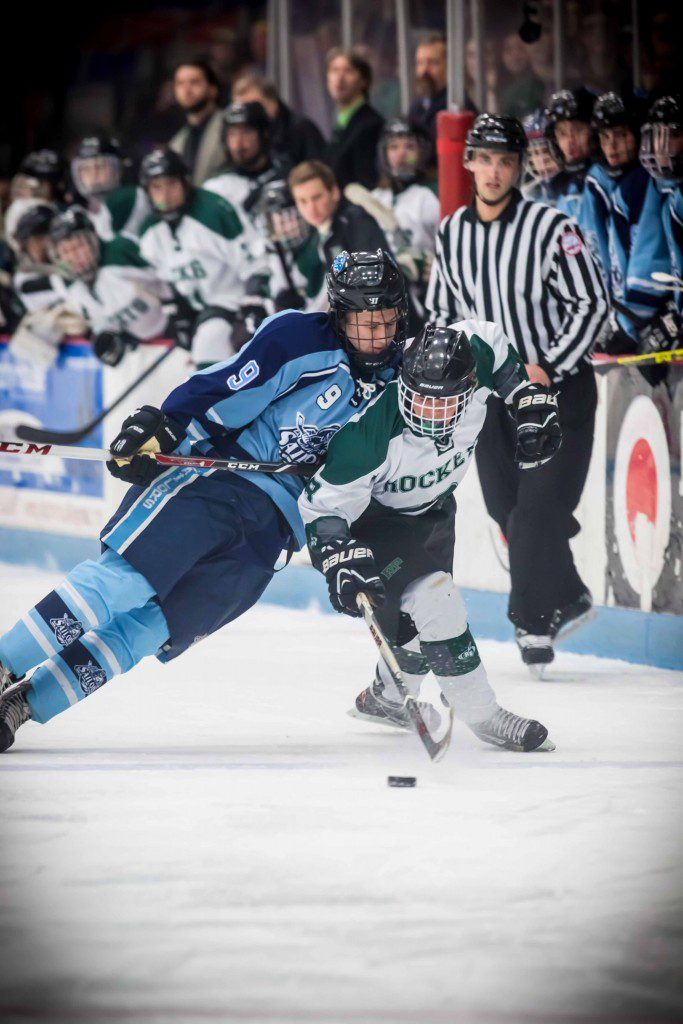 No. 8 Logan Holmfeld fights to get past Mona Shores Hunter Meyers. Photo/Tim Reilly 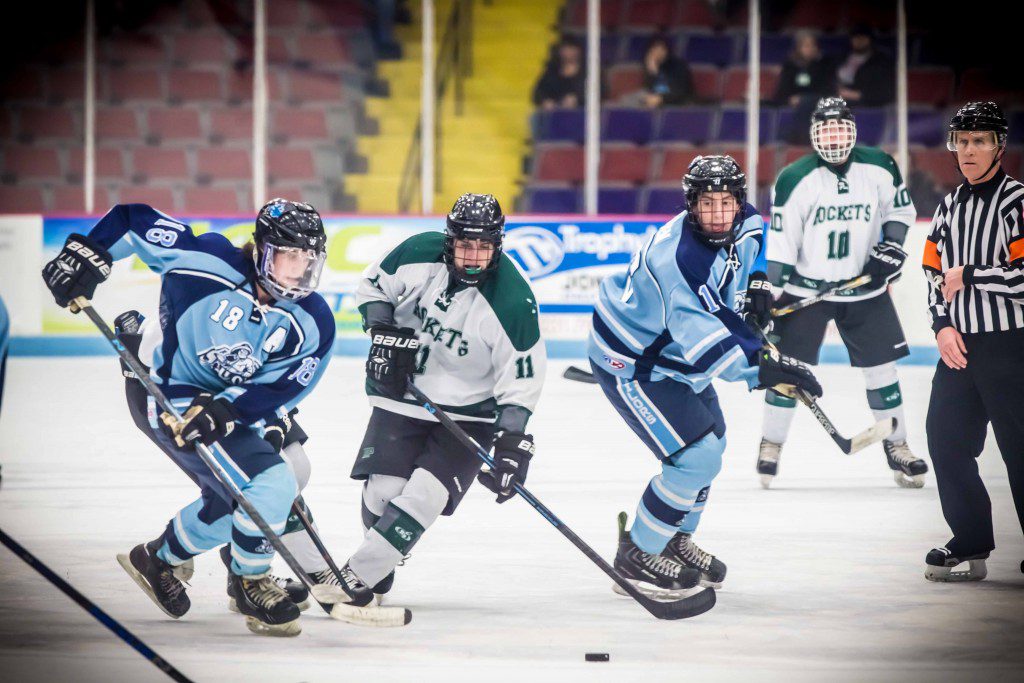 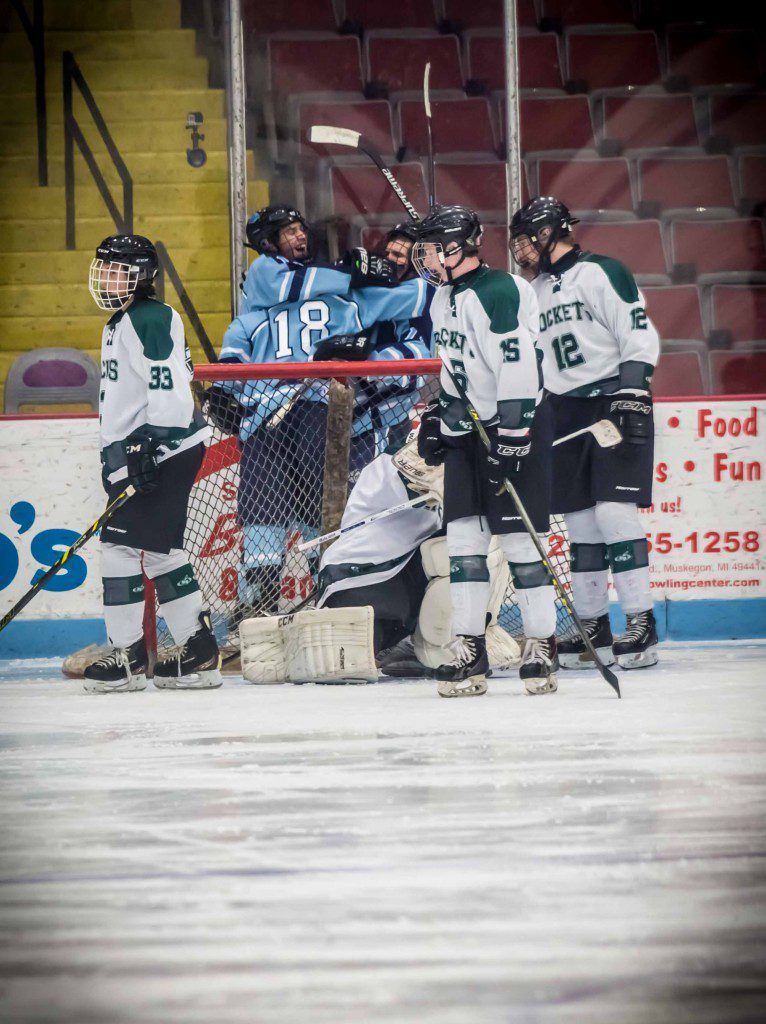 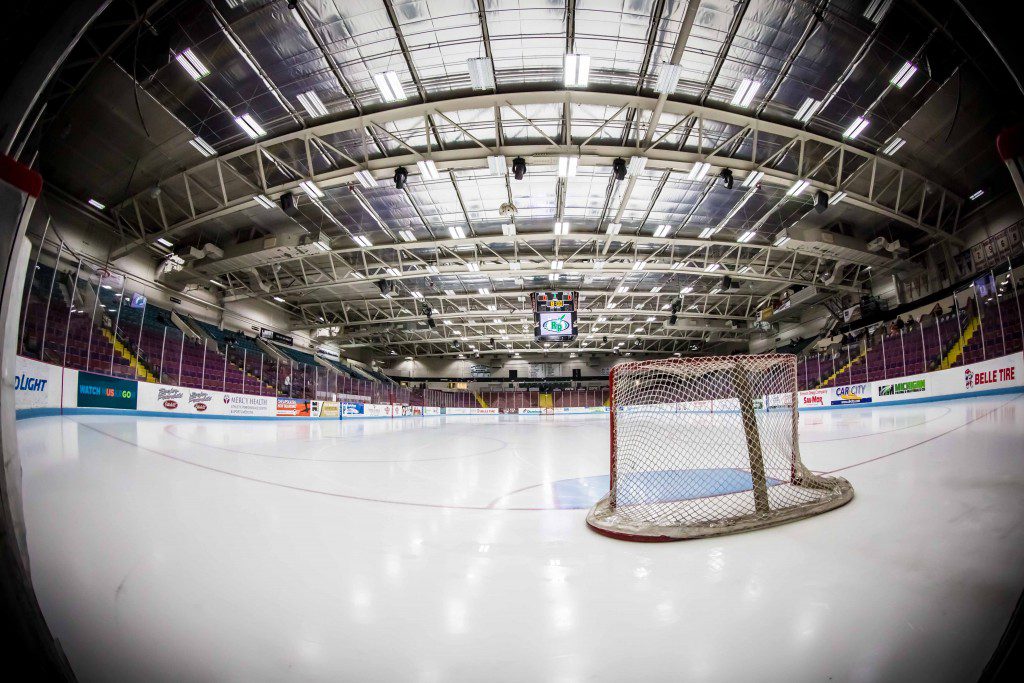 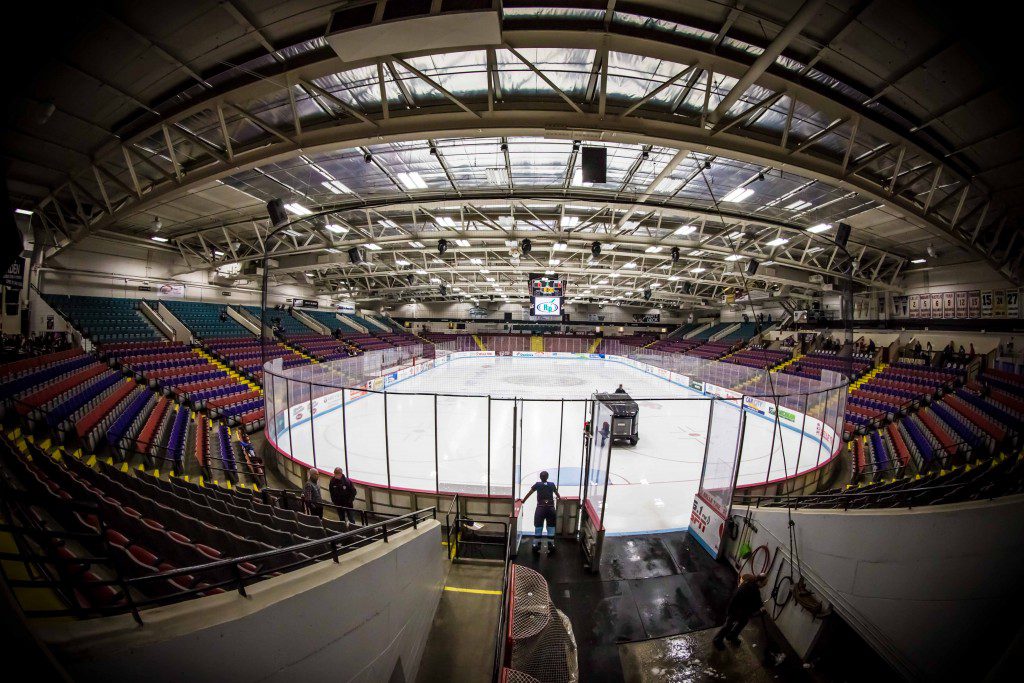 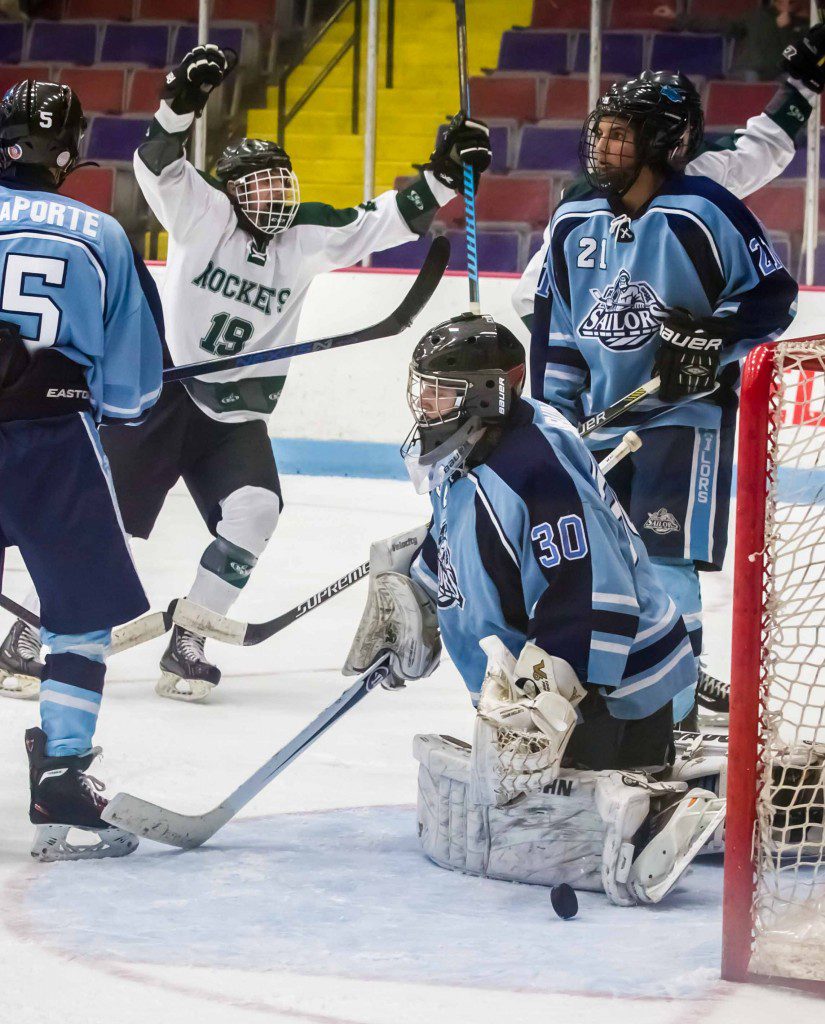 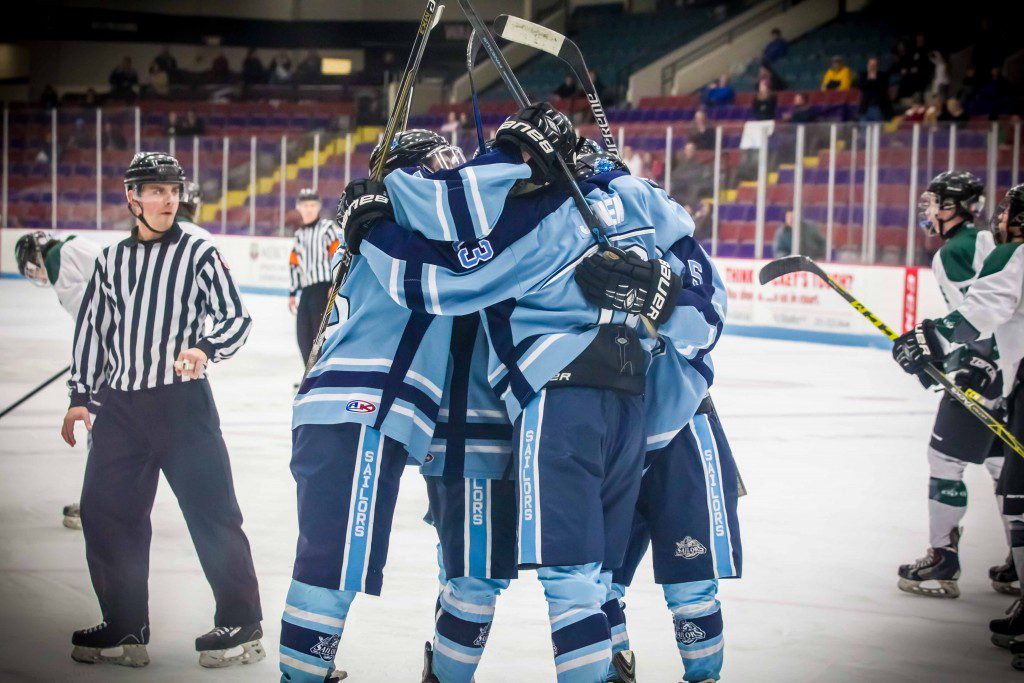 Jacks rally past Youngstown 4-2 after a scary injury to their teammate causes a long, frightening pause in the game