MUSKEGON – The Muskegon Lumberjacks have made a change at the top, parting ways with team president Rob Murphy and replacing him with former president Tim Taylor.

Taylor has been serving as CEO of the L.C. Walker Arena as an employee of the city of Muskegon since September. He will continue to run the arena for the city, as well as serving as president of the Lumberjacks. 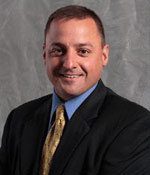 Tim Taylor, the new president of the Lumberjacks.

The Lumberjacks issued a short statement about the change on Thursday, but did not specify whether Murphy had resigned or been fired.

“We would like to welcome Tim Taylor to the organization, as he brings experience, love for Muskegon, the L.C. Walker Arena and Events Center, and the Muskegon Lumberjacks.”

Taylor told LocalSportsJournal.com that team owner Dan Israel, a resident of Bloomfield, “felt he needed to make a change.”

Taylor, 43, is a veteran of the Muskegon hockey scene.

Taylor stayed on as president of the new Lumberjacks, a development team for elite junior players, when the club began play in the United States Hockey League in 2010. He resigned midway through the 2013-14 season to pursue business interests outside of hockey.

He returned to the scene this fall as CEO of the arena, after the city took over management of the building from the Lumberjacks.

“It was my passion for the game and passion for the community,” Taylor said, when asked why he chose to return to the team. “As I spent more time back in the building the last few months, I remembered what a great product it is, a great league.

“I was watching some college hockey the other night, and thinking about guys who have come through this league. Dylan Larkin from the Red Wings played two years in this league and must have played in this building a dozen times.”

As president, Taylor will be tasked with improving the Lumberjacks’ performance at the gate. The team has struggled with attendance in recent years, and is averaging 2,072 fans per game this season in a facility that seats about 5,000.

The Jacks averaged 2,089 fans last season, according to the USHL.

Taylor said he is excited about the challenge of selling the elite junior brand of hockey to more fans in Muskegon.

“I want to help promote the USHL brand and try to educate the community on what it is and hope people come out a support it,” said Taylor, who added that the team is definitely planning to remain in Muskegon next season.

“We have half a season to get people into this facility. I’m working on that and the staff is working on that. We’re going to put forth our best effort to finish strong and start out strong next year.”

Fruitport bounces back with a close 22-21 win over Coopersville