MUSKEGON TOWNSHIP – Brooke Larabee, Delaney Bolles and their teammates on the Reeths-Puffer girls basketball team are a bit frustrated, and determined to do something about it.

While that may seem like a strange way to describe a successful 15-5 team, the Rockets haven’t been able to get past rival Mona Shores in key games for the past two seasons.

In last year’s district semifinals, the Rockets led most of the game before falling to the Sailors. 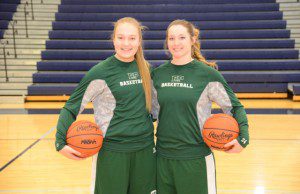 On Friday, Reeths-Puffer squandered a big lead and lost again to Mona Shores, costing them the chance to share the O-K Black Conference title with the Sailors.

They hope to put an end to the frustration this week, when they again compete in districts with Mona Shores and another O-K Black power, Muskegon.

The Rockets won’t mind if they face Mona Shores in Friday’s finals, even though they lost to the Sailors twice in the regular season.

Mona Shores will face Kenowa Hills on Monday, with the winner playing Muskegon in Wednesday’s semifinals. Reeths-Puffer drew a first-round bye and will play the winner of Grand Haven-Grand Rapids Union in the semifinals.

“It would build our confidence knowing we can beat them,” Bolles said about Mona Shores. “I feel like the name ‘Shores’ gets in our head. If we can beat them it will give us more going forward. We’ll probably have to play them again.”

While Mona Shores and Muskegon are obviously very good, Reeths-Puffer has a key combination those teams lack – Larabee and Bolles – two big junior post players who can dominate in the paint.

“Delaney will, most days, get a double-double and Brooke is our high scorer,” said Reeths-Puffer Coach Brandon Barry.

While tall players are best known for their post play, Larabee and Bolles are both versatile on the court, making them even more dangerous for other teams.

Barry has noticed an increase in opposing zone defenses, and the occasional double-team, to try and slow down Bolles and Larabee.

But with the two girls sharing the ball and working well together, it’s tough to stop them both.

“They’ll try to force them out of their comfort zone,” Barry said. “Delaney has a little bit more of a comfort area, right now, than Brooke does, because Brooke moves in and out a little more freely, but Brooke sees Delaney really well. If Brooke has a hot hand and they collapse two (defenders) on her, then Delaney is the beneficiary of that.”

While Barry is focused on the district tournament, his excitement about Larabee and Bolles extends to next winter, as well.

As good as they are now, there’s no telling how good they can be as seniors.

Barry said his goal is for opponents to feel like they’re in serious trouble whenever the ball gets dumped into the post.

“For me it’s more about if they can become an unstoppable force together,” Barry said. “I think they’re starting to get there. In games we see that happening.”

The post game is just one part of the Rockets’ attack.

Junior Artrese Williams, junior Elysia Mattos, senior Melissa Powell and senior Jazmin Wright-Zornes are critical pieces to Reeths-Puffer’s game plan. All four guards have the ability to find Bolles and Larabee, but also to stretch the defense with the threat of an outside shot.

When Bolles, Larabee, Mattos and Williams are on the floor, the chemistry is unrivaled. The four juniors have a knack for knowing where each other are on the court.

“Our point guards get the ball into us really well,” Larabee said. “We can’t really be successful without them. They can contribute points, defensive rebounds and stops, and that helps our team become successful.”

“We play well together,” Bolles said. “The four juniors on varsity know where each other are going to go. Most teams don’t have that in them.”