He’s been an O-K Conference, city meet and district champion. If he graduated tomorrow, he would have a lot to be proud of.

But Brown is a senior, and he’s never competed in the individual state tournament against the best high school wrestlers in Michigan. 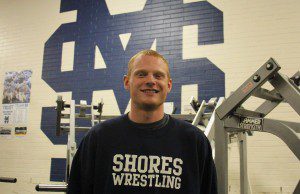 He came close to having that opportunity last season, losing in the regional quarterfinal found. Only the semifinalists in each weight class make the state finals.

Brown will get his final chance to qualify for state at Saturday’s Division 1 individual regional tournament at Portage Northern High School.

Dozens of other area wrestlers will also compete in Division 1, 2, 3 and 4 regionals at various locations, with a chance to qualify for the state finals, scheduled for March 3-5 at the Palace of Auburn Hills.

Brown, who wrestles in the 215-pound weight class, seems to be performing well at the perfect time, after starting the season rather slowly.

He lost a few more matches in December and January than the year before. He also had a disappointing day at the Greater Muskegon Athletic Association City Wrestling Tournament, finishing third in his weight class after winning the city title in 2015.

“I was hoping to do better at the city tournament, but I think I wrestled some quality opponents,” said Brown, who carries a 37-12 record into regionals. “I wasn’t happy with finishing third, but I wasn’t too upset because I thought I wrestled pretty well overall.

“It was a little bit of a slow start this season, but I think I’ve gotten things rolling here at the end. There were a few tournaments I won last year, which I ended up finishing worse in this year. My coaches have pushed me a little bit mentally to step it up and work harder.”

Brown reached a new height last weekend by winning the title in his weight class at the Division 1 individual district tournament at Grand Haven High School. He was one of 19 district champion wrestlers from the area.

That puts him among the favorites in the 215-pound weight class at regionals. As a district champ, he will have the advantage of competing against a fourth seed in opening round.

“I’m really hoping to use the seeding from the district tournament as a stepping stone,” Brown said. “I really want to make it to state this year.”

Brown is one of four Mona Shores wrestlers who qualified for Saturday’s regionals. Sean Halverson (112), Zach Donahue (119) and Sam Karel (152) will also make the trip and try to qualify for the next level.

Brown is the Sailors captain, and his teammates will look to him for leadership and inspiration during the intense competition.

“Nick is a very quiet, hardworking, conscious student-athlete who I never have to worry about because he takes care of business and quietly goes about his routine,” said Mona Shores wrestling coach Blake Groenhout.

“He’s always showing leadership with his work ethic and hustle. He’s also got a positive attitude and never complains, which is another reason he’s our leader.”

On the mat, Groenhout says that Brown typically finds a way to win at the end.

“Nick is very difficult to score on, he’s very strong on the mat,” Groenhout said. “He is always under control and keeps his matches close before finding a way to pull them out.”

Brown, who also played for the very successful Mona Shores football team, will continue his gridiron career next fall at Concordia University, where he will play on the offensive line.

He’ll also be pursuing a business degree at Concordia, after he’s done taking care of business in high school wrestling.

“I kind of like the idea of finances and working with money, so that’s always kind of interested me,” he said.