SPRING LAKE – If Keegan George ever decides to become a basketball coach, he’ll have plenty of early experience to build on.

The 6-4 senior post player for the Spring Lake boy’s basketball team has been doubling as a coach for his little brothers’ teams.

“When my brother Kaden was in fourth grade, they asked my mom (Heather) and I if we were interesting in coaching, so we started that,” George said. “Then we started a team this year for my younger brother Karson, who’s in fourth grade. They’re doing pretty well. They’ve only lost one game. 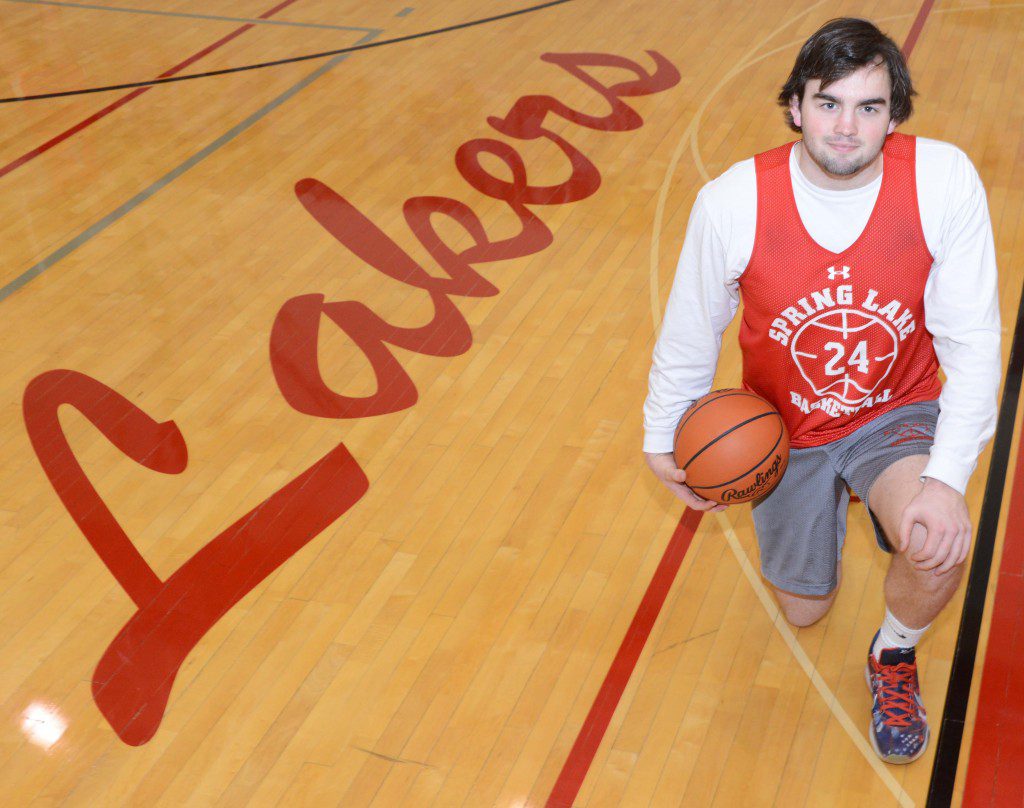 “It’s definitely tiring (running practices everyday),” he added. “But I look at it as an opportunity to spend time with my brothers. I’m going to be heading off to college next season, so it’s a chance to hang out with them.”

George got another opportunity to be a leader of young players this season, when three talented sophomores – guard Jack VanWingen, 6-4 forward Griffin Lorimer and 6-8 center Sam Johnson – joined the Lakers’ squad.

Johnson is a full-time starter, VanWingen is a part-time starter and Lorimer is the first player off the bench.

George and senior point guard Cameron Ball have provided the leadership necessary to help the younger players adjust and find their roles on the team.

As the regular season winds down, everything seems to be working out extremely well. The Lakers are 12-2 overall and 7-0 in the Lakes 8 Conference and are currently riding a 10-game winning streak.

With a unique blend of seniors and talented underclassmen, a conference title is likely. The Lakers have a two-game lead over Ludington with three league games remaining. They can clinch at least a tie for the championship in their next game at Fremont on Friday.

“He’s like a coach on the floor,” said Spring Lake Coach Bill Core said about George. “He has that capability of recognizing defenses and seeing that we need to switch things up.

“He gets his teammates in the right spot by being vocal. He’ll notice when we’ve got mismatches and try to expose those. It’s just part of him being a senior and taking over that leadership role. It’s invaluable.

“Cameron Ball and Keegan are the leaders of the team and they’re now starting to trust those sophomores more. And that’s given those young kids more confidence and made this team better.”

Perhaps George is so good about working with youngsters on varsity because he was in the same position not long ago.

Due to the suspension of another player, George was asked if he wanted to make the jump to varsity as a freshman, just two weeks before the season started.

“My parents didn’t even believe me when I told them,” George said with a laugh.

Although he was thrilled with the opportunity, George’s first year was a tough learning experience, and he only scored 40 points all season.

But more importantly, he soaked up all he could from Lakers’ seniors such as Adam Clauss and Austin Johnson, Spring Lake’s all-time leading scorer.

“I learned so much from those guys, but the biggest thing was just getting used to the speed of the game (on varsity),” George said. “It got me up to pace.”

His numbers have increased steadily ever since. This year George is averaging 17.7 points, 7.5 rebounds and four assists per game. Core said George may be the first Spring Lake player since Levent Sipahi in 2004 to lead the Lakers in the three major statistical categories –  scoring, rebounding and assists.

George also has a chance to reach 1,000 career points. He’s currently at 897. “We have six games at least one district game left, so it will be close,” Core said.

But before he begins the next chapter in his basketball career, George is intent on writing a fitting ending to his high school season. And that means another run at state honors when March Madness begins.

Last year the Lakers advanced to the Class B state quarterfinals before losing to eventual state champion Godwin Heights.

“I definitely think we’re better than we were last year because we’re more well-rounded,” George said. “We were mostly all guards last year, but we’ve got more size and we’re better all-around this season.”