St. CHARLES, Mo. – The West Michigan Ironmen learned the hard way on Sunday that no lead is safe in indoor football.

The Ironmen, playing the first regular season game of their inaugural season, led the host River City Raiders 21-0 early in the second quarter and 35-24 at halftime.

But the Raiders fought back with a vengeance, the lead changed hands seven times in the second half, and in the end the Ironmen came out on the short end of a 75-68 score.

The wild game was decided in the final few minutes.

The Ironmen had a 60-58 lead with 5:10 left in the fourth quarter after an 18-yard touchdown reception by Corey Johnson from quarterback Alex Carder. 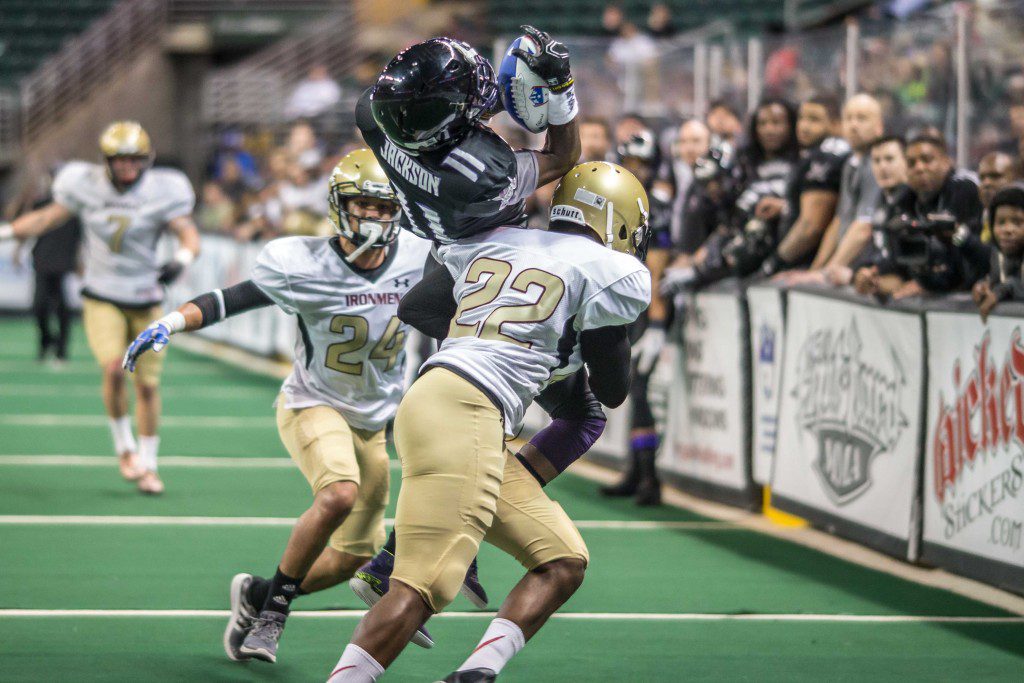 No. 22 Jamar Hibbits makes the hit for the Ironmen. Photo/Karl Lund

The Raiders responded with a 12-yard touchdown catch by DeAndre Jackson from quarterback Tearen Austin with 3:25 left to give River City a 65-60 lead.

The key moment of the game came on the ensuing kickoff when River City kicker Corey Adamson sent a line drive off the body of West Michigan’s Corey Edwards. The Raiders recovered the loose ball on their own one-yard line.

The Ironmen didn’t go quietly. They pulled to within 72-68 on a 20-yard touchdown connection from Carder to Justin Mott, followed by a two-point conversion on a catch by Donovan Campbell.

The Raiders then nailed a 28-yard field goal with 25 seconds remaining to take a seven-point lead.

The Ironmen received the ball with a chance to tie or win the game, but their final drive stalled at the Raider 14-yard line.

“I like how the guys fought at the very end and nobody quit,”’ said Ironmen Coach Ty Lynk. “We were in a position to win the game or at least tie it. I found out that some of our players really do have some good heart. 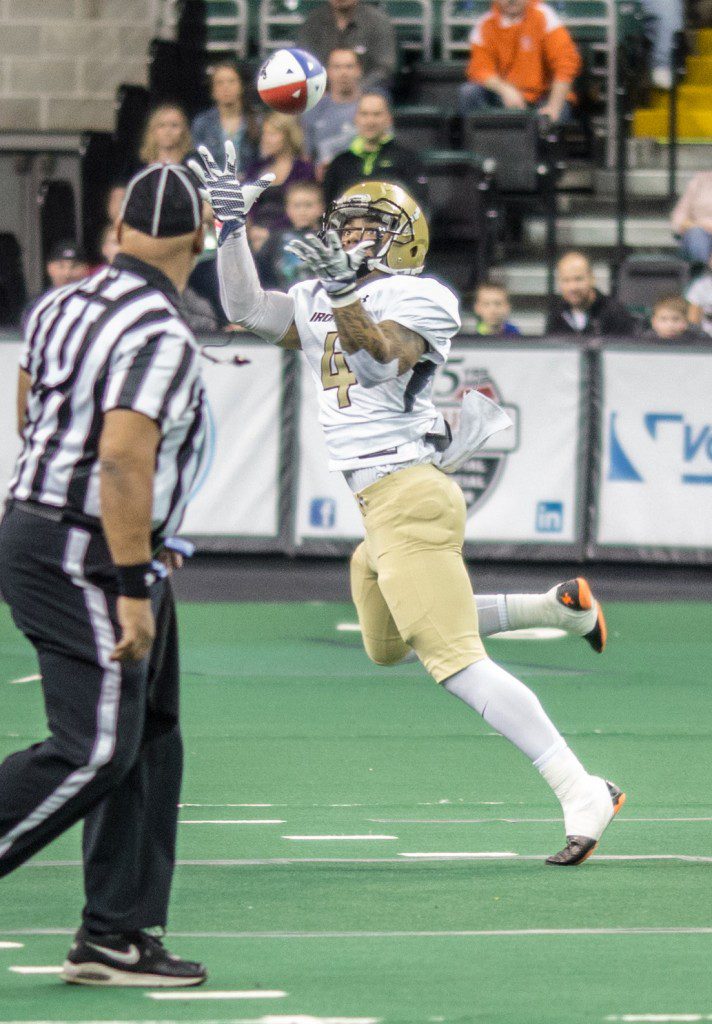 The Ironmen hurt themselves with some execution problems throughout the game.

Carder lost two fumbles – one in the first half and one in the second – that led to 14 River City points.

“It’s ball security,” said Carder, who still had a very big day by completing 20 of 36 passes for 326 yards and nine touchdowns. “I have to take care of that. It’s part of my job.”

“I think some lessons are that we have to understand how to execute and hold our energy a little more,” Lynk said. “It’s a big part of it.

“The turnovers were one thing, but I think more of it was the execution on the special teams that hurt us the most. The fumbles also didn’t help us at all.

“We definitely have some scheme things we need to look at, and like any other time we have to make sure we’re putting people in the right spots.”

They also scored on a 2-yard touchdown run by Korey Ringer.

River City’s first half points came on a 3-yard touchdown run by Austin, a 7-yard touchdown completion to Chris Headd, a 10-yard scoring pass from Austin to Jackson and a 35-yard field goal by Adamson.

The Raiders outscored West Michigan 28-13 during the third quarter and led 52-48 heading into the fourth.

River City scored on touchdown passes from Austin to Jackson of 27 and 32 yards, respectively, while Austin had touchdown runs of 19 and 1 yards. 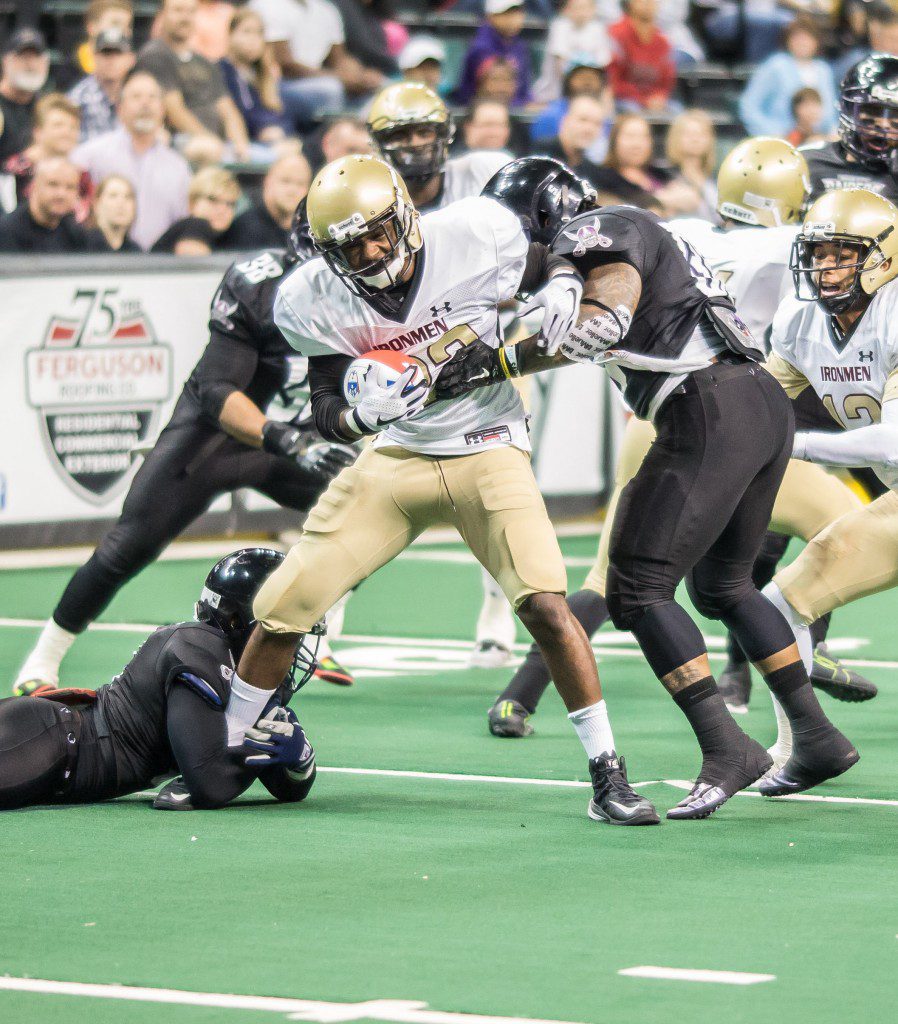 That led to the crazy final five minutes and the loss for the Ironmen.

The Ironmen will host their home opener against the Northern Kentucky Nightmare next Sunday at L.C. Walker Arena at 3:15 p.m.