GRAND RAPIDS – It couldn’t have been more different than the first meeting in early January, but in the end, the result was all too familiar.

But Linwood Lee and the Big Reds made just enough winning plays to defeat the Bucs, 52-48, to capture the program’s fourth-straight district championship. 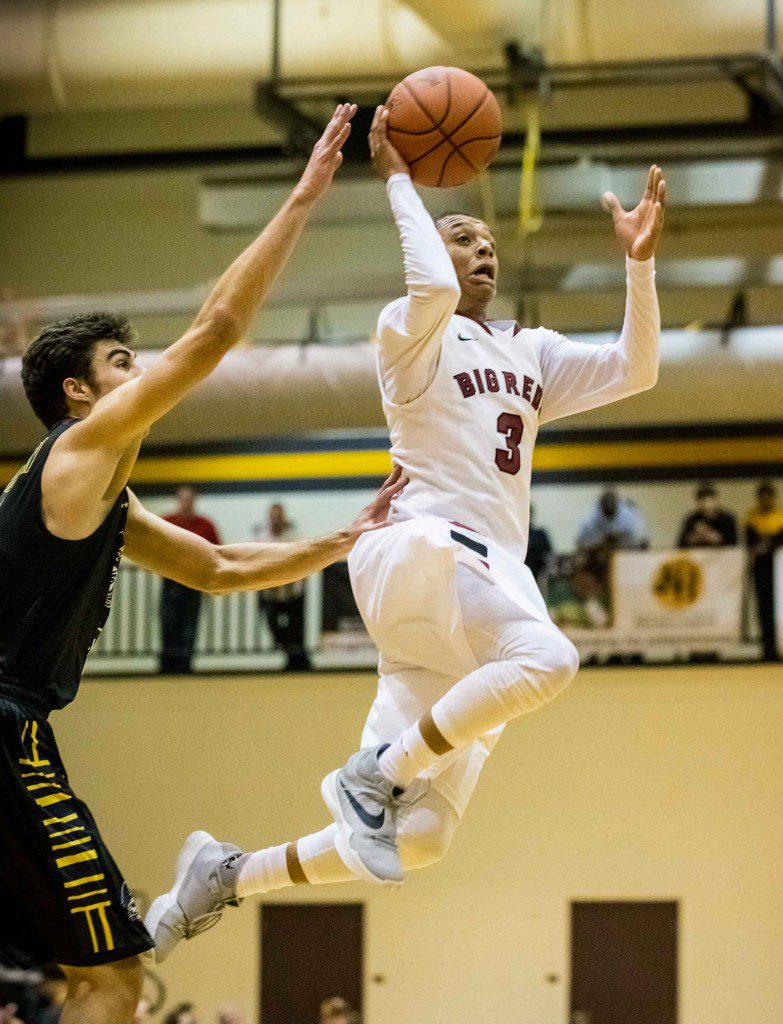 Big Red Coach Keith Guy said he figured Grand Haven would give his team all it could handle, despite a 28-point victory over the Bucs in January.

“For some reason my kids wouldn’t believe me,” Guy said. “(Grand Haven) played great. But we gutted it out. These Big Reds have a lot of heart and they never lay down. We faced some adversity, and that’s good to be in, but I don’t want too many like that. It’s killing me.”
Guy was facing the possibility of losing his first district game as a head coach late in the fourth quarter. Grand Haven erased a seven-point deficit and captured a 48-47 lead on two free throws from senior forward Ross Koella with 1:28 left in the game. But Guy had a plan in the works when he took a time out.

“We wanted to set up isolation with Jermane (Golidy) getting to the basket, or Linwood in that same spot (on the right wing). Linwood got the ball and went for it and it went in,” the coach said. Muskegon point guard Micheal Littlejohn came off a screen and drew a Bucs’ defender, and kicked out to a spotted up Lee, who knocked down a triple to give Muskegon a 50-48 edge.

“I just had to be ready to knock it down,” Lee said, who finished with 12 points. “I just had to relax and hit my shots.” Grand Haven still had 40 seconds to work with, but senior guard Tyler Weidman’s floater just outside of the paint came up short.

Muskegon secured the rebound, pushed the ball ahead to senior Jacarius Scott, who swooped in for a sharp-angled layup for the victory-clinching score.

“It hurts because you’ve invested so much,” Immink said, his voice cracking. “Gosh, it was so close. That makes it tougher. The guys tonight were second to none. 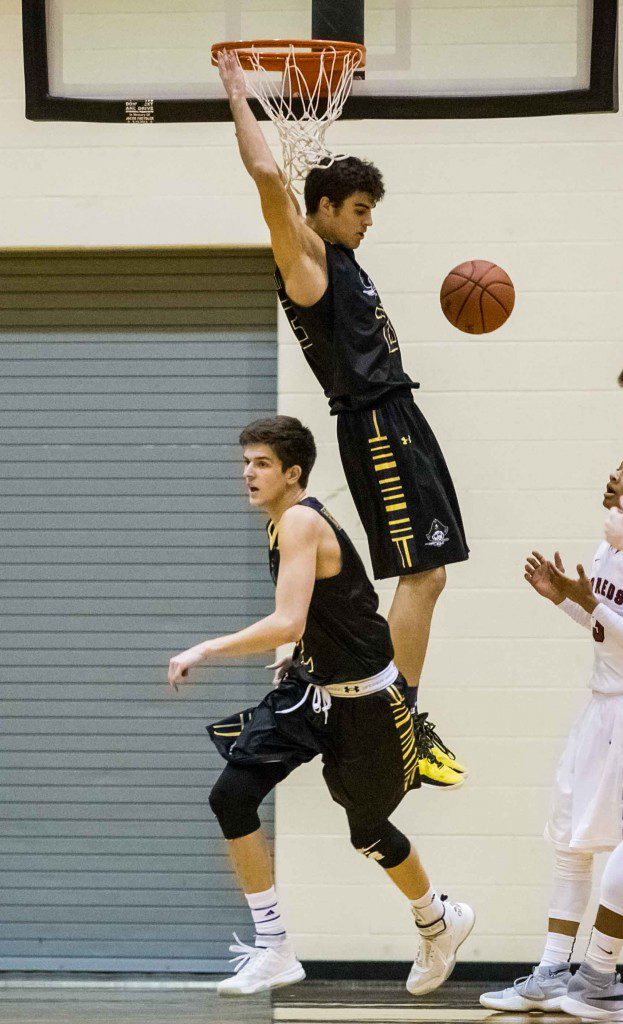 Grand Haven center Ross Koella beats the D with the Jam while Zac Holman gets back. Photo/Tim Reilly

“It’s really a shame somebody had to lose. But I’m just so proud of our guys.”

Grand Haven was brilliant in the first quarter, jumping out to a 17-7 lead thanks to tight zone defense and tremendous spacing offensively.

Point guard Drew Hewitt’s penetration helped set up Koella with a pair of first-quarter dunks, and his kickout assist to Weidman for a three-pointer gave the Bucs their lone double-digit lead.

“They definitely watched a lot of tape, because they knew exactly what we wanted to do,” Lee said. “We knew we just had to stay focused and be patient.”

Guy put in a stretch zone defense in the second quarter that made Hewitt and the rest of the Bucs’ guards work for every dribble they took. And slowly but surely, Muskegon clawed back and trailed by just 23-21 at halftime.

“I think it hurt them,” Guy said. “It put them out of rhythm, we were able to get out on their shooters and stop penetration. We were a step slow tonight, and we have to play better defense moving forward if we want to advance.”

Golidy began to heat up in the third, scoring 10 of his game-high 15 points. But it was Lee’s first big three-pointer – on another kickout from Littlejohn – that gave the Big Reds’ a 36-30 advantage and momentum entering the fourth.

The Big Reds looked like they had the win wrapped up when Lee converted a tough layup for a 45-38 lead with under four minutes to play, but the Bucs refused to quit.

Senior forward Zack Sinke’s huge corner three-pointer helped the Bucs draw to within one point with 3:15 left, and they re-captured the lead nearly two minutes later.

But in the end it didn’t hold up.

“We have some guys with experience and they’ve obviously played this team before, so we knew what Muskegon had,” Immink said. “We felt if we played a good game, we could compete with them and we did.”

“I don’t know what we finished with, the high 40s or 50, and it sounds funny, but that was great production because Muskegon’s defense is just so good.” 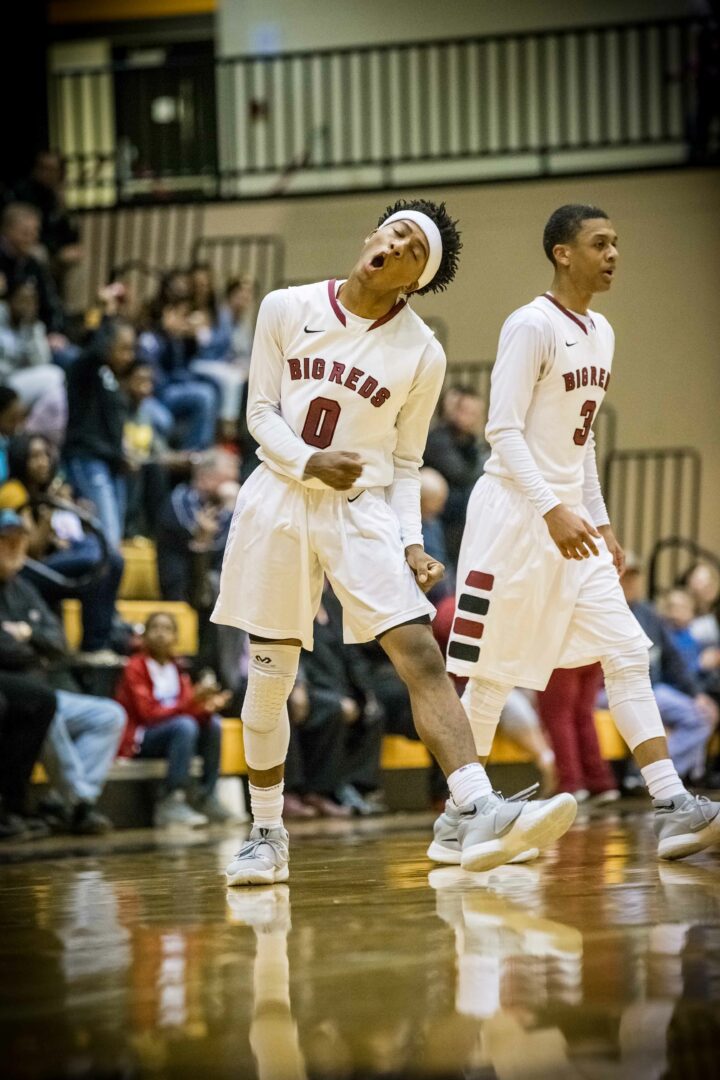 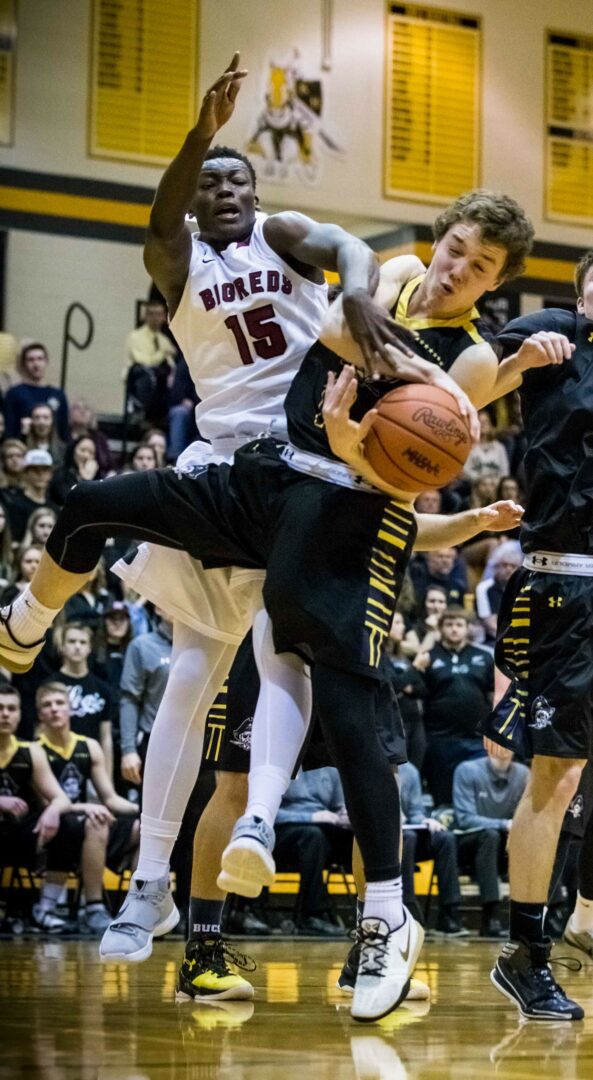 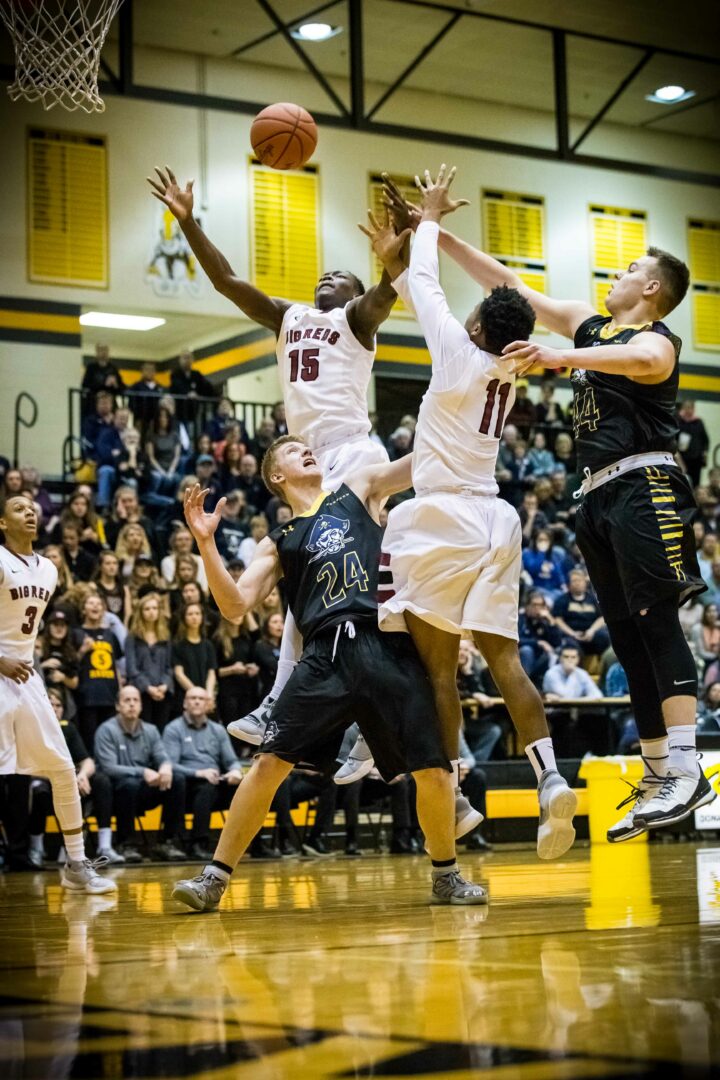 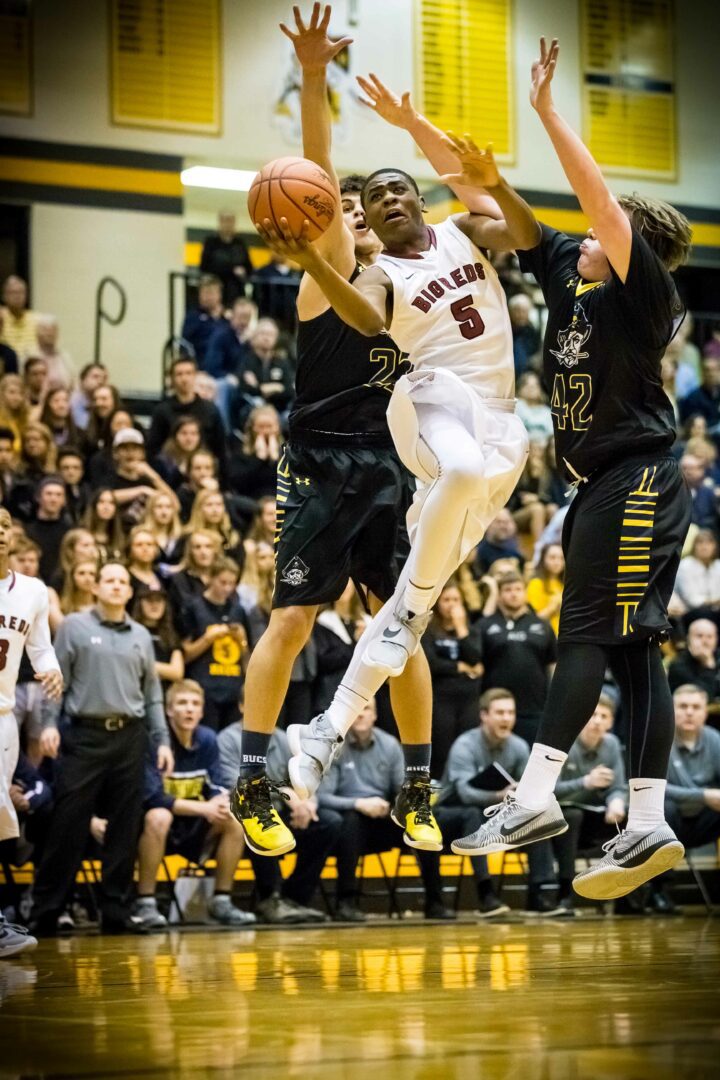 Big Reds No. 5 Jermane Golidy drives to the hoop for two. Photo/Tim Reilly 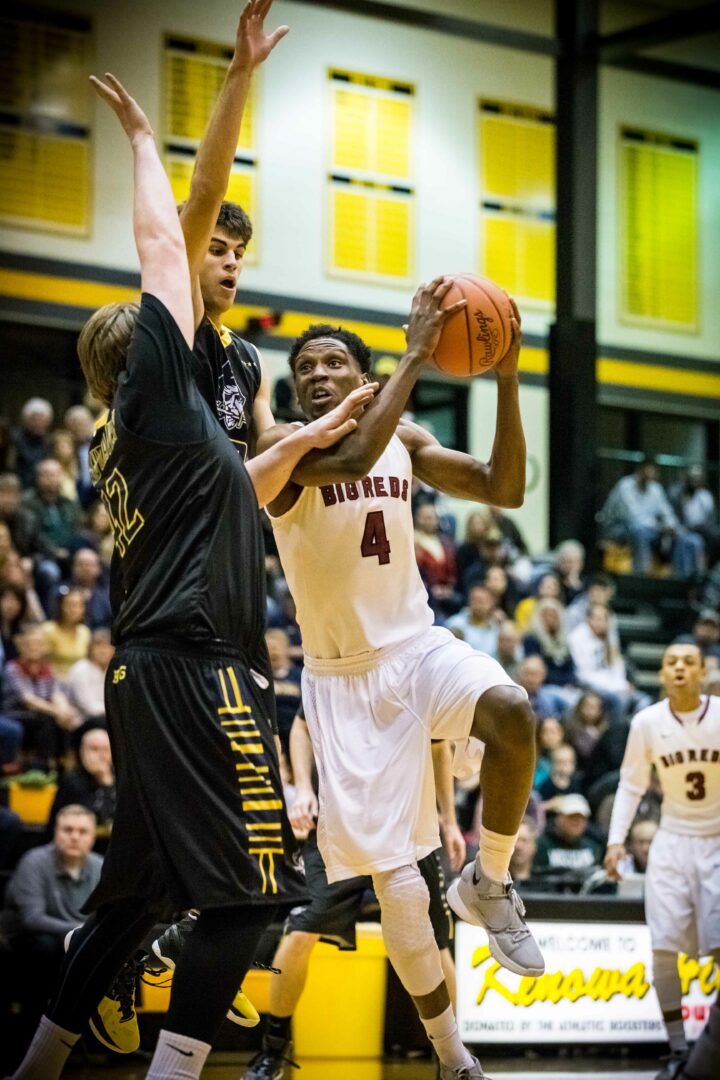 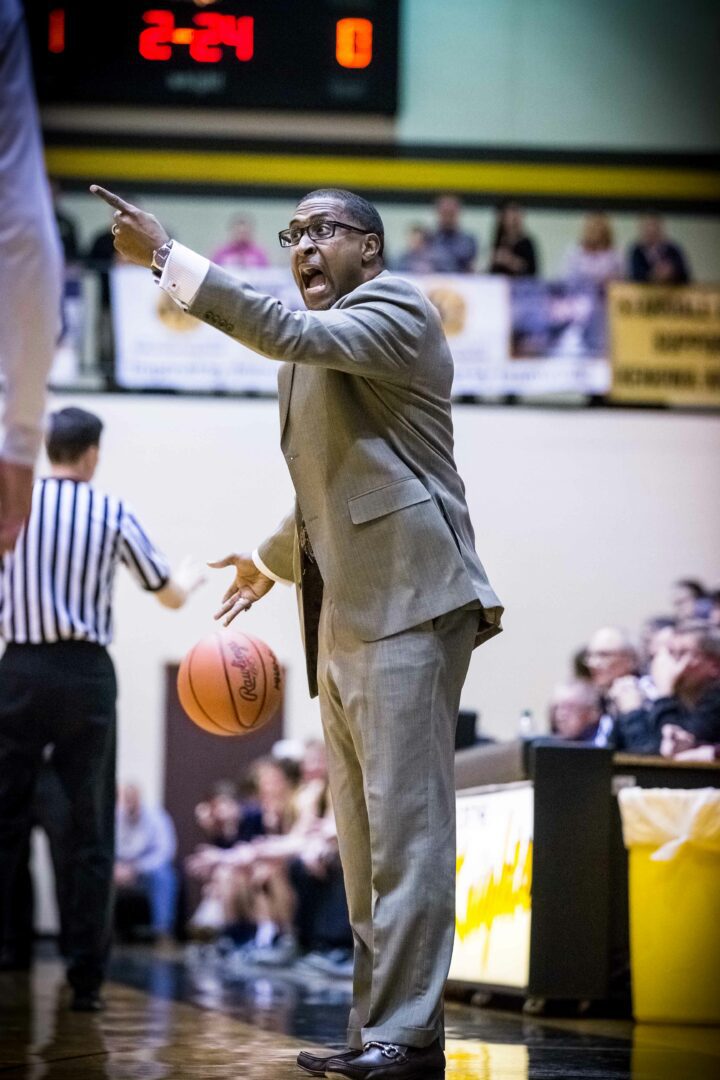 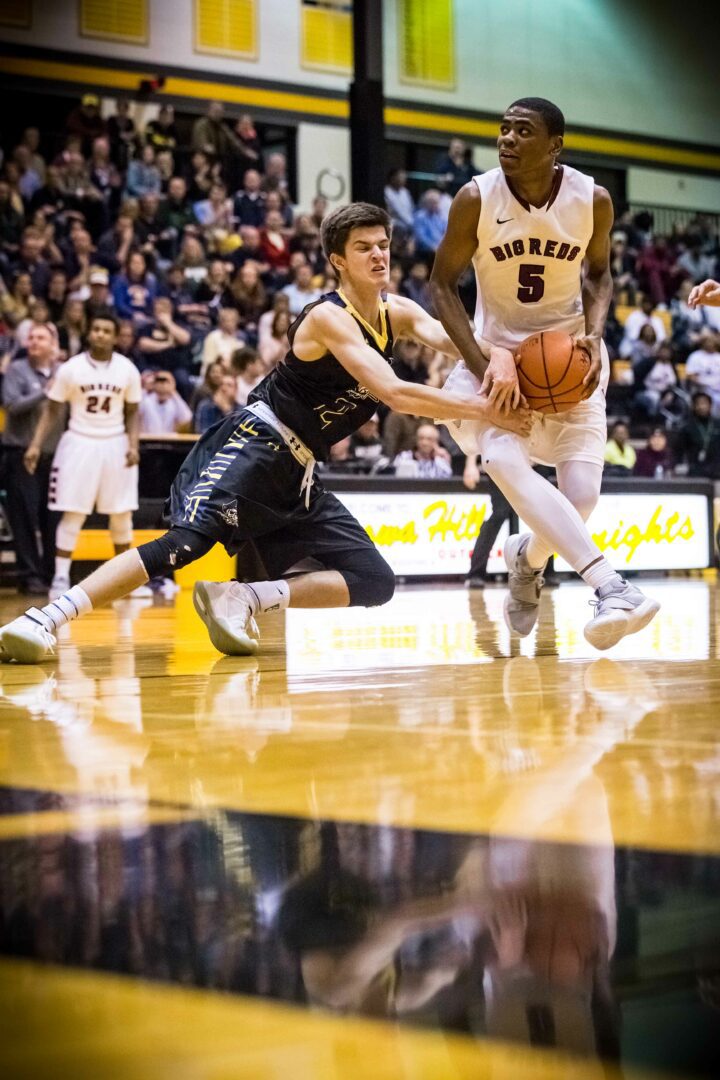 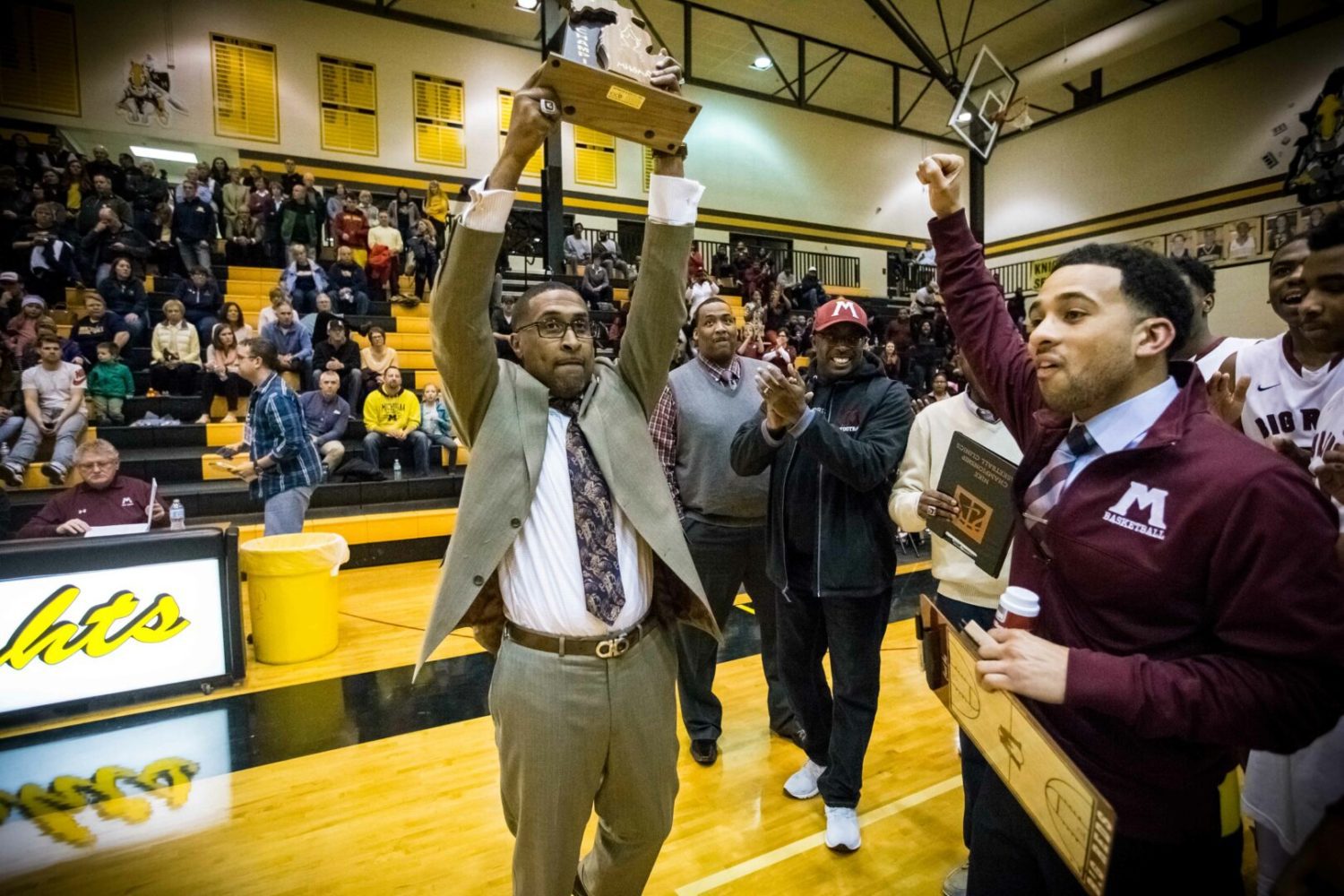 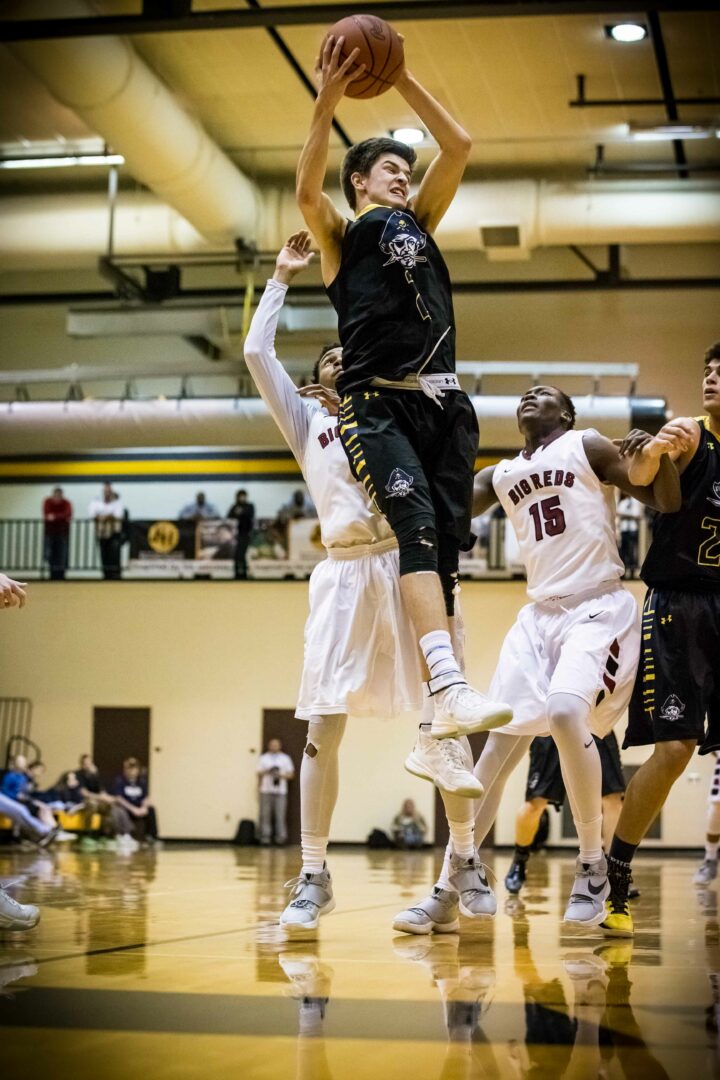