MUSKEGON – It turned out to be a memorable weekend for Rem Pitlick, Matej Paulovic and the Muskegon Lumberjacks.

On Friday, Pitlick had two goals and an assist and broke the Lumberjacks’ single-season point record in their win over Sioux City.

Paulovic, his linemate, assisted on two goals and collected the 100th point of his USHL career.

On Saturday, Pitlick wrapped up a great weekend by scoring a three-goal hat trick to lead the Jacks to a 5-3 victory and weekend sweep of Sioux City. 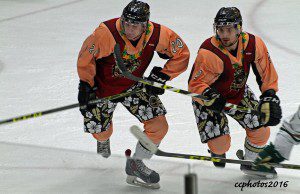 And Paulovic picked up another assist, passing Matheson Iacopelli to become the team’s all-time career point leader with 102.

“Matej has done a fantastic job, he’s been really good for us and I’m proud of his accomplishments,” said Lumberjacks Coach Todd Krygier, whose team improved to 22-22-6 on the season.

Meanwhile, the Lumberjacks modeled their eye-opening “Beach Night” uniforms that have been drawing national attention for several days.

The outfits, which the Lumberjacks have been promoting on social media, prompted articles from Sports Illustrated, Fox Sports and CBS Sports, among others.

Saturday’s game didn’t start out well for the Jacks. 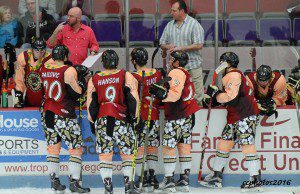 Coach Todd Krygier, right, talks to his team during a time out. Photo/Carol Cooper

Less than five minutes into the game, Lumberjack winger Jake Coleman was whistled for a roughing penalty.

Muskegon tied the game with just seven seconds remaining in the first period when Logan Drevitch centered to an open Charlie Gerard on a power play, and Gerard wristed the puck past Sioux City goalie Cam Gornet.

Drevitch and Tyler Irvine were credited with assists.

The first period could have been much worse for the Jacks. Sioux City had a 10-2 edge in shots, but except for the early goal, Cooley diverted everything sent his way.

Cooley, usually the Jacks’ backup goalie, played both games with this weekend and captured both victories.

“I thought (Cooley) did a real nice job,” Krygier said. “He’s been working hard in practice. Being fair to him, he’s had a tough road this season and it’s good to see him have success.”

Evan Wisocky gave Sioux Falls a 2-1 lead at the 7:49 mark of the second period with a shorthanded goal.

But Muskegon recovered on the same power play when Pitlick ripped a shot past Gornet to tie the game at 2-2 at the 9:09 mark. Grant Gabriele and Derek Daschke recorded assists on the play.

Pitlick wasn’t done yet. He took a hooking penalty at the 9:25 mark, took control of the puck two minutes later when exiting the penalty box, then scored on a breakaway to give the Jacks a 3-2 lead after two periods.

Muskegon’s Dante Palecco scored at 4:37 of the third period to put the Jacks up 4-2. Paulovic assisted on the goal to set the all-time team point record.

Sioux City’s Logan Gestro scored at 6:52, but that was as close as the Musketeers would get.

Sioux City pulled its goalie for an extra attack with 1:17 left in the game. Pitlick took advantage by scoring an empty-net goal at 19:51 to complete his hat trick.

It was Pitlick’s league-leading 38th goal and 69th point of the season.

“What a good teammate he is, what a humble guy he is, he’s worked for everything that he’s got. “This isn’t just because he’s got talent. Behind the scenes, he’s an absolute work horse. It’s no surprise to me that he’s having the success he is.”