MUSKEGON- Rem Pitlick is continuing to have an unbelievable season for the Muskegon Lumberjacks.

Pitlick scored two goals on Thursday, giving him 40 on the season, and making him the fourth player in United States Hockey Tier 1 history to reach that scoring plateau.

However, the Lumberjacks failed to have the same success as Muskegon blew a pair of two-goal leads and gave up the game-winning goal with less than 1 second left in regulation. That result led to a 6-5 loss to the Waterloo Black Hawk in front of 1,354 fans at the L.C. Walker Arena. 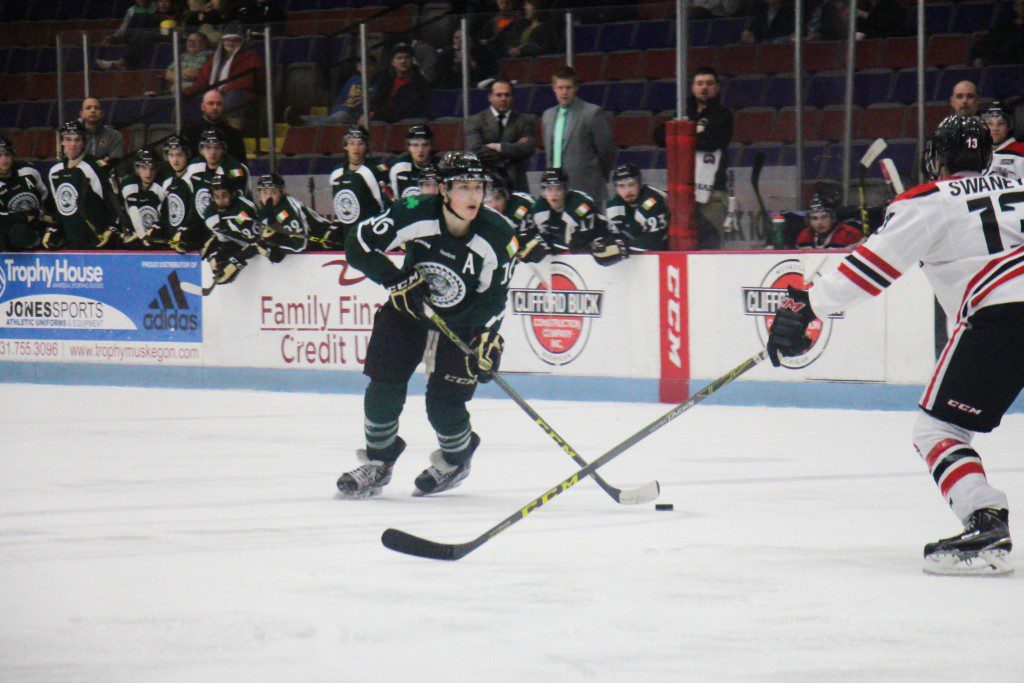 Rem Pitlick controls the puck at the blue line for Muskegon. Photo/Jason Goorman

“The guys weren’t committed to do what they need to do defensively,” Lumberjacks Coach Todd Krygier said. “When they score with 0.9 seconds left, it’s really frustrating.”

Coach Krygier was proud of the accomplishment set by his league-leading goal scorer and having two 40-goal scorers during his tenure.

“Rem has been doing a terrific job and Iacopelli had 41 goals here and we are proud of what they have done, but we just would have liked to get the win for Rem over Waterloo.”

Muskegon is now 22-23-6 on the season, good for 50 points and seventh place in the USHL’s Eastern Conference.

The Lumberjacks opened the scoring with a pair of goals 58 seconds apart. Pitlick scored at the 3:51 mark of the first period while Collin Adams connected on the power play 4:49 into the contest.

Matej Paulovic assisted on both goals while Pitlick assist on Adam’s power-play strike that gave Muskegon an early 2-0 advantage.

Waterloo responded with two goals 39 seconds apart from Yuri Terao and Zach Yon at the 8:22 and 9:01 mark of the first period, respectively, to tie the game at 2-all. 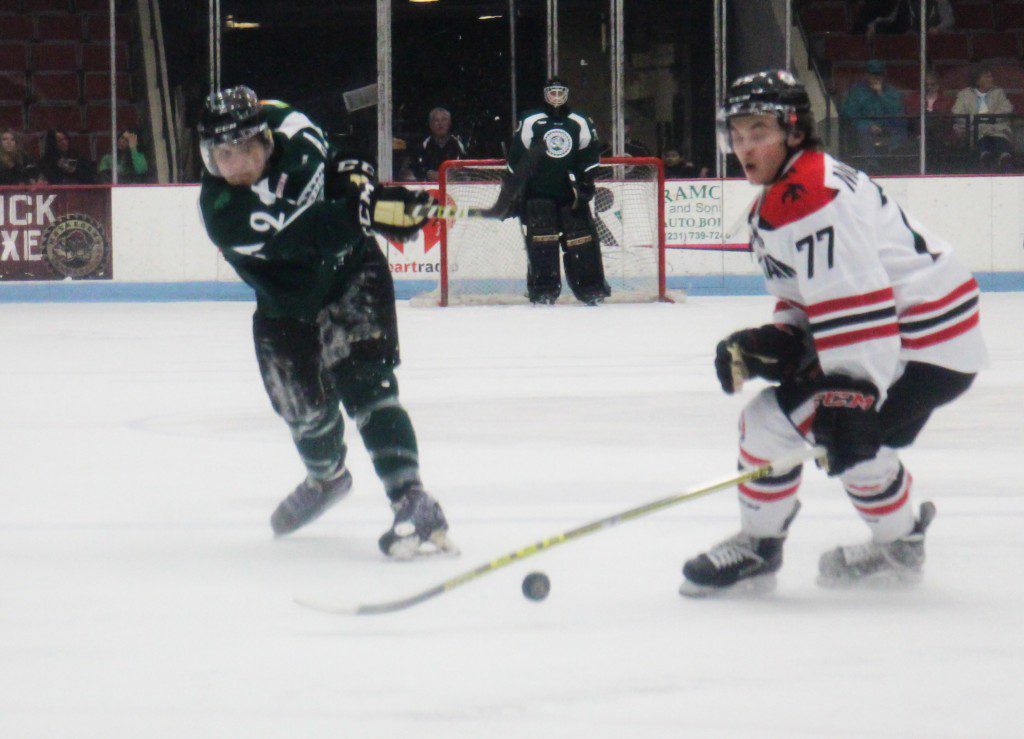 No. 2 Mitch Eliot fires the slap shot for the Lumberjacks. Photo/Jason Goorman

The Lumberjacks outscored Waterloo 3-2 during the second period to take a 5-4 lead into the second intermission.

Pitlick scored his 40th goal of the season 28 seconds into the stanza, while Paulovic notched two goals, one at at 3:58 and the other at the 16:07 mark of the second period.

The Black Hawks picked up a shorthanded goal by Nick Swaney at the 10:40 mark of the second period and Jake Ryczek added a tally with 35 seconds left in the middle period.

The Black Hawks tied the game 5-all on a goal from Yon at 7:13 of the third period.

Waterloo’s Swaney scored the game-winning goal with 0.9 seconds remaining to give the Black Hawks their first lead of the night.

Black Hawks goaltender Cale Morris picked up the win in relief by stopping nine of 10 shots. 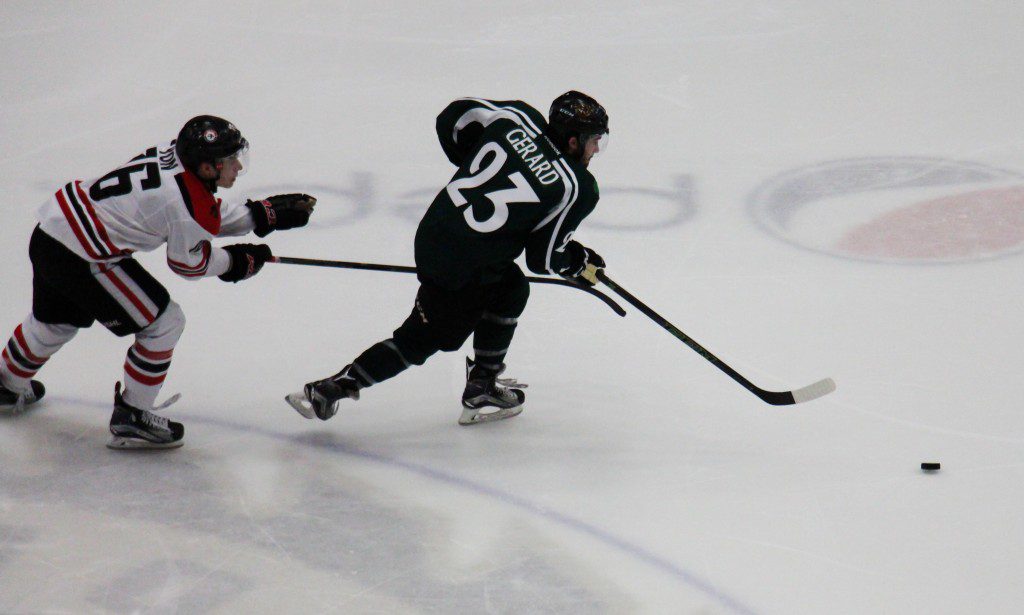 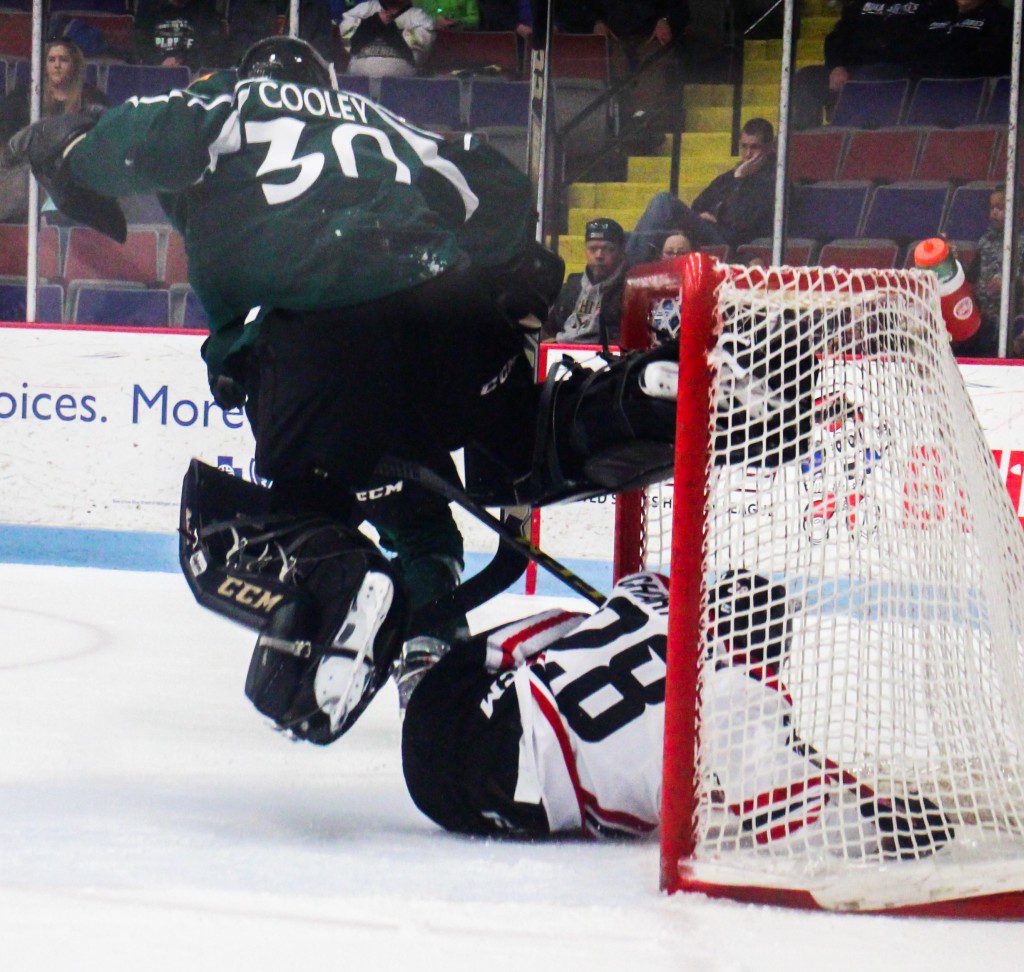 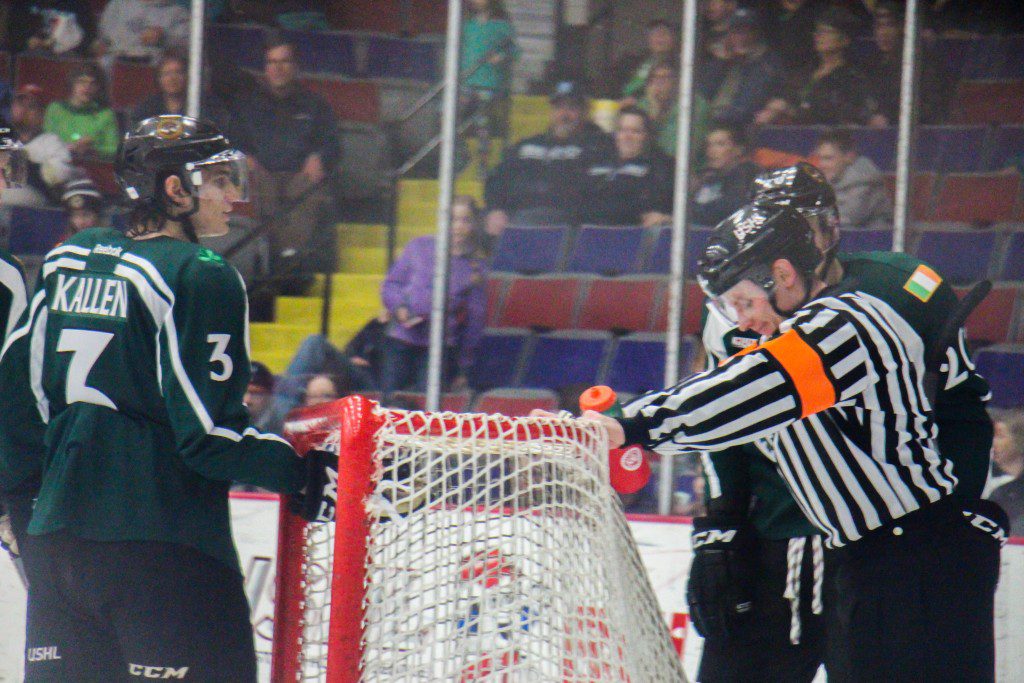 Right defenseman No. 3 Nate Kallen and Matej Paulovic talk with the referee after the hard Waterloo attack on the net. Photo/Jason Goorman

Ravenna’s Brian Thompson has been pitching brilliant baseball, in memory of a friend