MUSKEGON – For a team with a lot of players who are new to indoor football, the West Michigan Ironmen look pretty darn good.

The Ironmen, a first-year expansion team in American Indoor Football, gave local fans a first taste of their product Sunday afternoon with an exhibition game against the Atlanta Vultures at L.C. Walker Arena.

The fans couldn’t help but be impressed with the Ironmen’s 63-29 victory in their only tune-up before next week’s season opener.

The Ironmen will open the regular season next Sunday in St. Charles, Missouri against the River City Raiders. Their first home game is slated for March 20 against the Northern Kentucky Nightmare at 3:15 p.m. 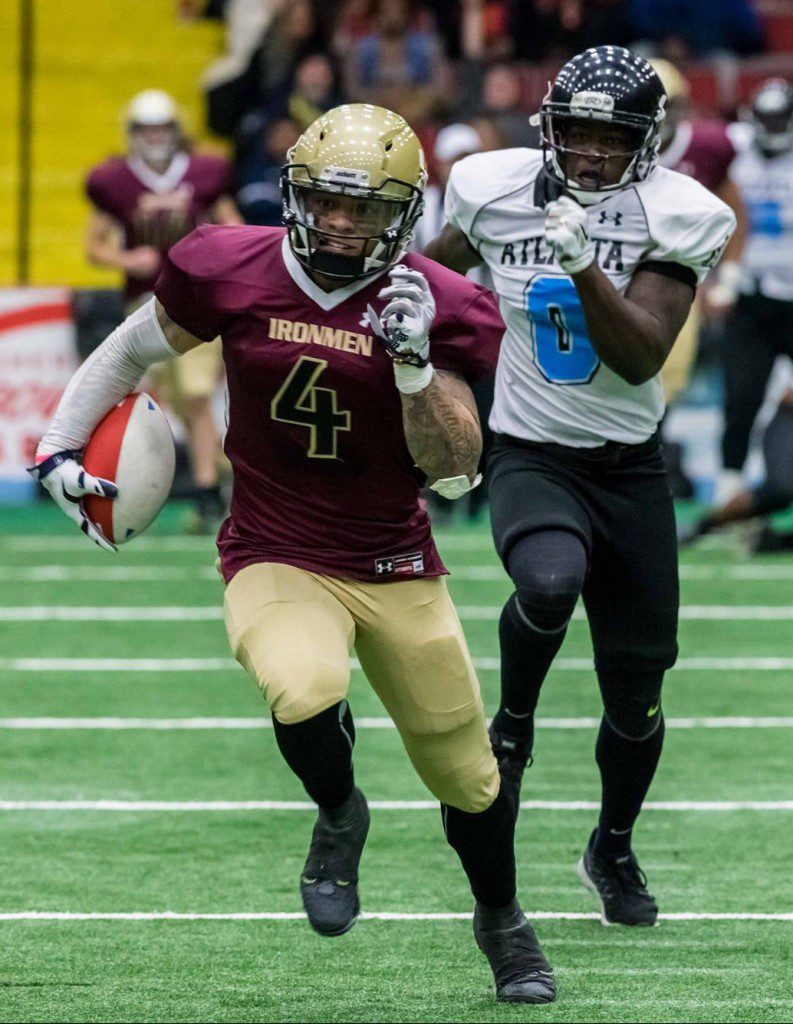 No. 4 Justin Mott moves the Ironmen up field. Photo/Tim Reilly

“The guys have been anxious to get out here and they have worked hard over the last two months and obviously the result showed today,” said Ironmen Coach Ty Lynk. “I am excited, I expected to score, but I look to us to be tighter in some our special team efforts.”

While the Ironmen impressed everyone with their quick-strike scoring, Lynk was just as impressed with the shut-down defense, which registered seven sacks and recovered a fumble in the end zone for a touchdown.

“Most teams have a goal of three stops during a game (against opposing offenses),” Lynk said. “I believe we had way more than three.”

The entire day couldn’t have gone much better for the brand new professional sports franchise.

There were a few snags, like when a kickoff hit the low-hanging scoreboard in Walker Arena (which will probably be a permanent issue), or when a member of the cheerleading squad was doing cartwheels in the middle of the field when a play was about to begin.

Despite the little issues, Ironmen owner Terrance (TJ) Williams was thrilled with his team’s first chance to meet its fans.

“I’m excited,” said Williams, a former Oakridge High School football standout and member of the old Muskegon Thunder indoor team. “I was really happy with the crowd that came out for a preseason game. I think we had somewhere between 2,000 and 3000 fans.

“So far so good. The team we had on the field I was pretty excited about. They really did what they needed to do today. I’m excited about the talent they have across the board.”

One of the Ironmen who is new to indoor football is Ronald Johnson, the former Muskegon High School and University of Southern California standout receiver.

Johnson, who caught one pass, a touchdown, said the game was a lot different than traditional football.

“It was a little different at first, but the guys kept me into and it started to be fun,” Johnson said. 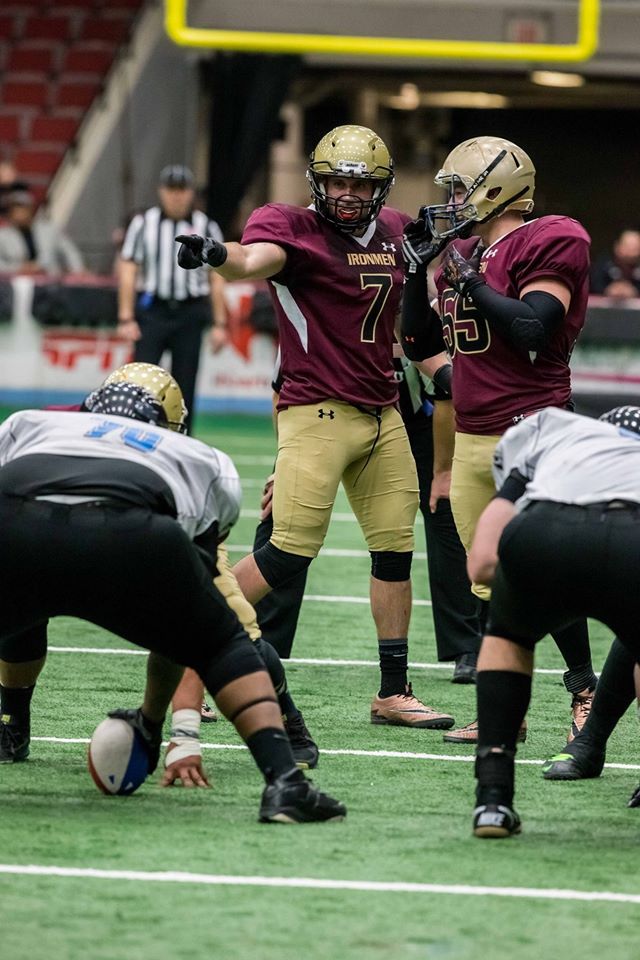 No. 7 Derek Vandenbosh points out the Atlanta offense to No. 55 Stan Knapper. Photo/Tim Reilly

The Ironmen took control of the contest right away.

Atlanta got on the board with a 47-yard kick return touchdown to cut its deficit to 13-7 with six minutes left in the first quarter.

West Michigan responded with a 37-yard touchdown pass from Carder to wideout Donovan Campbell with 4:33 left in the first quarter.

The Ironmen made it 25-7 with a fumble recovery touchdown in the end zone by Ryan Armstrong, after West Michigan blocked a field goal attempt with 13:12 left in the second quarter.

The Vultures cut their deficit to 25-13 on a 12-yard touchdown run with eight minutes left in the second quarter. 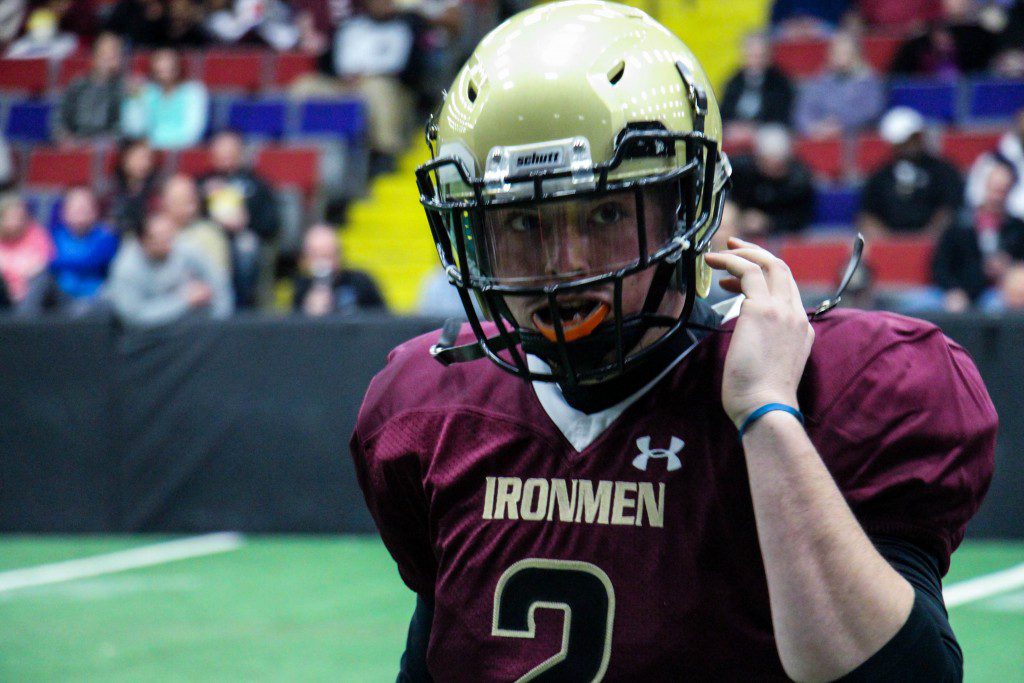 Stephen Kulkowski walks to the bench after a play. Photo/Jason Goorman

West Michigan scored its lone touchdown of the third quarter on a 47-yard reception by Mott from Carder with 11:35 left.

The Vultures countered with two touchdowns in the third quarter, leaving the Ironmen with a 46-29 lead after three.

West Michigan blanked the Vultures in the fourth quarter, outscoring them 17-0 on 24-yard TD reception by Corey Johnson, a 17-yard field goal by Jacob Hardy and a one-yard touchdown run by Korey Ringer.

Carder completed 11 of 21 passes for 223 yards and seven touchdowns. 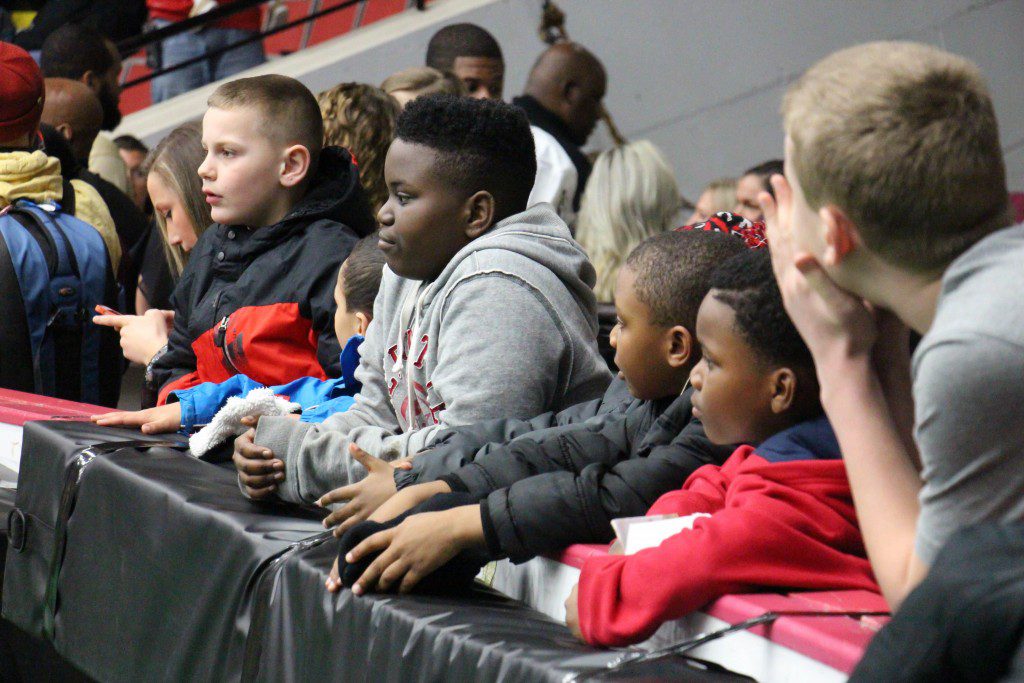 Kids line the wall of the north end zone during halftime.