The West Michigan Whitecaps rallied from a five-run first inning deficit to post a 6-5 victory over the Dayton Dragons at Fifth Third Park on Thursday.

A sacrifice fly by Will Allen in the bottom of the first got the ‘Caps on the board before they took the lead with two runs in the fourth and three in the fifth. RBI singles by second baseman Will Maddox and outfielder Jose Azocar highlighted the furious rally for West Michigan.

Whitecaps starting pitcher Fernando Perez was unable to escape the first inning. But relievers Toller Boardman, Jake Shull and Gerson Moreno were outstanding, keeping Dayton from scoring over 8 1/3 innings. Boardman got the win, tossing 5 1/3 innings while striking out five with no walks. 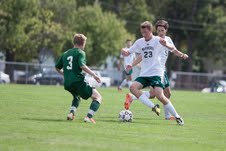