MUSKEGON TOWNSHIP – The Muskegon Risers fans will have to wait a little longer to see their team score its first home goal of the season.

On Saturday night at Reeths-Puffer High School, the Risers fell in 1-0 to CKS Warta in a hotly-contested home match. The Risers, now 0-4 on the season, played in front of their home fans for the first time all season, yet were unable to give their supporters much to cheer about. 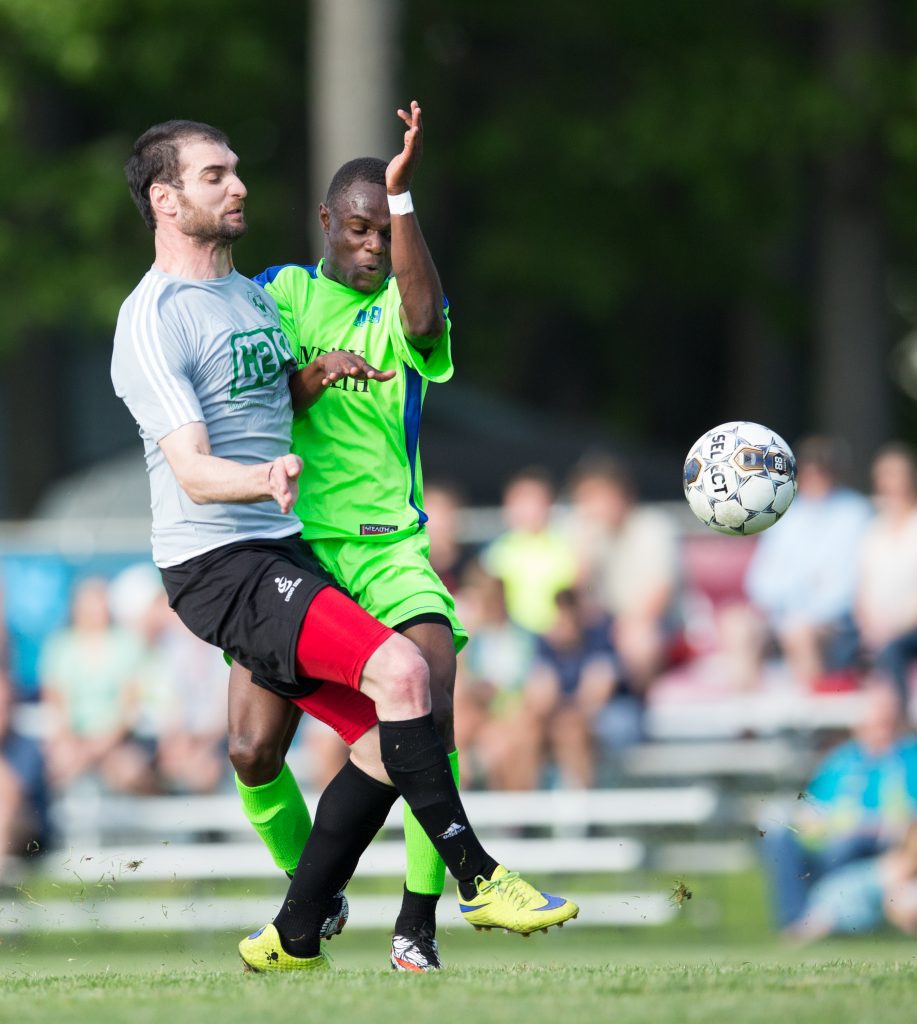 Daniel Luzindya just before being body checked by a Warta defenseman and chases the ball into the opposing zone. Photo/Kevin Sielaff

But they came close.

“It was an improvement on last week,” said Risers defender Stuart Collins, who was victimized by a punch in the mouth by an opponent late in the game. “We played really well it the first half for about 25 minutes. Four or five great chances, we should’ve capitalized on them but we didn’t.”

Muskegon flirted with the back of the net a number of times during the game, but fingertip saves and sturdy posts held the Risers off the scoreboard.

Muskegon dictated play in the first half, forcing the bulk of the scoring opportunities. Forward Daniel Luzindya received most of the near-net touches, but couldn’t convert. Luzindya tallied three shots in the first half, including a sharp header, but none were on net.

The Risers nearly broke through on the last play of the first half, as Ryan Wagenmaker let a shot loose from the center of the box.

Warta goaltender Rodolfo Gonzalez blocked the shot, but it squirted loose behind him.

With the ball on the goal line, Gonzalez spun and made a sprawling save to send the game into halftime 0-0.

“We really have done a nice job the last week (in practice) of attacking up top and we actually had great chances,” said Risers head coach Ben Ritsema. “I don’t know how many we should’ve had — it could’ve been five, could’ve been six — we did attack very well, we just got unlucky with a lot of stuff.” 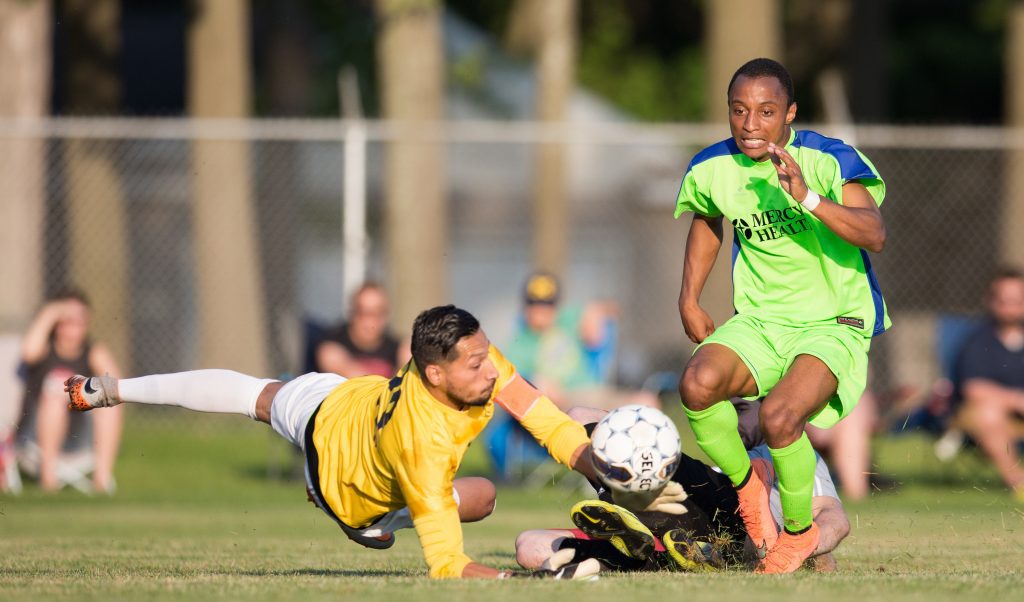 The visiting squad recorded three shots in the first six minutes of the second half, and forced Muskegon goalie Tyler Lane to make a pair of nice saves to keep the game scoreless.

Thirteen minutes into the half, however, CKA Warta got one past Lane. George Kennedy pulled up lame with a tweaked hamstring during CKA Warta’s attack, but labored through, too possession of the ball, beat a number of Risers and ripped a shot high past Lane.

Things got chippy late in the game, with both teams taking advantage of the referee’s vanishing whistle. The rough play culminated with Collins taking a literal punch to the mouth which drew a flood of blood.

“I don’t want to blame anybody for the loss, but I think the officials lost control of it for a period in the

game” Collins said. “Some guys stand up to that challenge and other people kind of diminish from it. I think we grew after that period. We got more determined to get back into the game, and we had two or three chances and we should’ve taken advantage of them.”

The Risers made a couple of late pushes. Luzindya and Paris Martins both had shots ding off posts and crossbars, but couldn’t find the mark.

Ritsema acknowledged the difficulty his team has had with finishing attacks so far this season.

“Finishing is the name of the game and we were not able to put the ball in the back of the net,” Ritsema said. “I think we hit the post like three times. It’s disappointing but we did some things okay.”

Muskegon will be back at home on Saturday, June 4 with a game against Milwaukee Brewers FC. 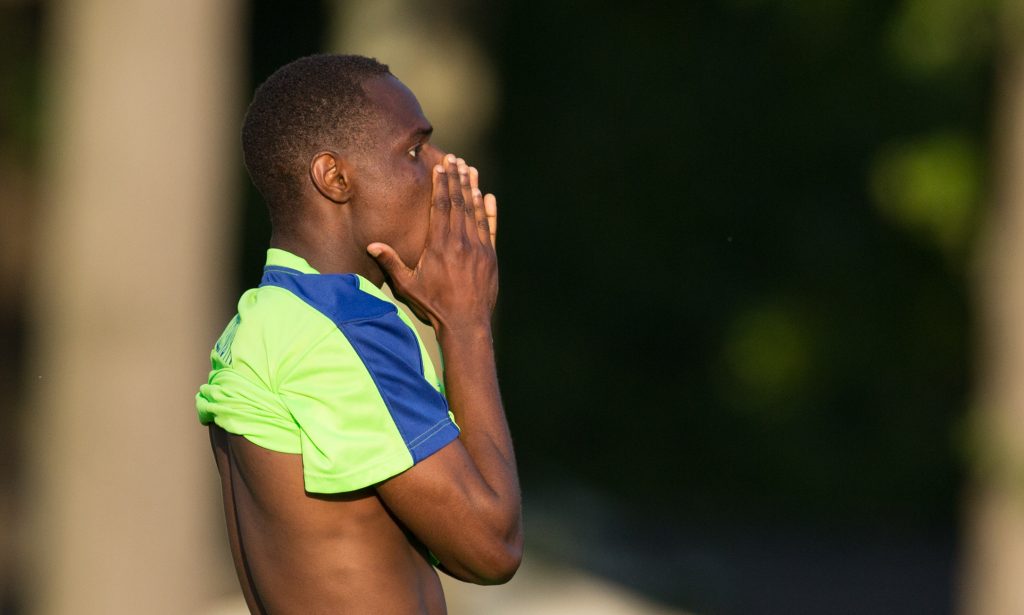 Daniel Luzindya reacts to missing an open net goal near the end of the match. Photo/Kevin Sielaff