The Eagles have captured the league crown the last four seasons and five of the last six.

They had a change in leadership in the offseason, when longtime coach Jeff Lohman left the team to become the women’s coach at Muskegon Community College, and Greg Fleener took his place. 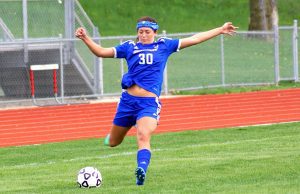 But Oakridge has not skipped a beat, which was evident on Tuesday.

The Eagles traveled to Whitehall and dispatched the Vikings 3-0 to improve to 5-1-1 overall and 3-1 in the WMC.

But it wasn’t all good news for Oakridge on Tuesday.

The Eagles’ spirits were dampened just eight minutes into the game when sophomore Felicia Werner went down with an apparent leg injury.

“It doesn’t look good,” Fleener said about Werner. “I think just about everybody on this side of the field heard a pop.”

Werner was transported to Hackley Hospital for further evaluation.

The Eagles seemed to use the injury as motivation, controlling the offensive zone and earning numerous scoring chances in the first half.

Just one of those chances were successful. With 20:26 remaining in the half, Whitehall was called for a tackle in the box, resulting in an Oakridge penalty kick that Lanessa Meyers converted, giving the Eagles a 1-0 lead going into halftime. 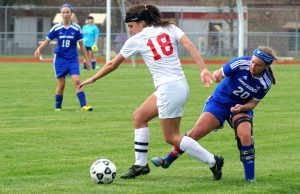 Whitehall’s Lauren Lopez (18) gets the ball away from Mackayla Zimmer. Photo/Leo Valdez

Play got a little chippy during the early minutes of the second half, with the teams combining for four yellow cards. Two were called on a Whitehall player, which meant an automatic ejection that left the Vikings with only 10 players on the field for the rest of the game.

Andi Cartwright scored the Eagles’ second goal of the night with 15:15 to play after beating a defender at the top of the box.

The Vikings best scoring chance happened with 10:45 remaining when a corner kick ended up behind everyone, including Oakridge goalkeeper Micky Wall, but senior McKenzie Davis got to the goal line and cleared the ball out of the danger zone.

“My two outside fullbacks (Meyers and Davis) are just so good at what they do and I allow them the freedom to go forward,” Fleener said. 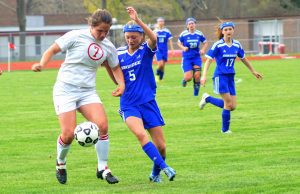 Davis finished the scoring with 2:23 remaining, gaining control at midfield and beating all Whitehall defenders before finding the back of the net.

“She knows she can go forward and she just decided ‘I’m going’ and that was pretty fun to watch,” Fleener said. “It’s probably not something she does if it’s 0-0, but if you’re up 2-0 late in the game, go for a run.”

The loss drops Whitehall to 4-6-1 overall.

“We just didn’t utilize the whole field,” Nichols said. “I think if we had everyone and more time, we could have broken them down and got it in the net.

“I think that’s all it was, we just weren’t playing our game. We had plenty of chances, we just didn’t quite finish.”