MUSKEGON – At Reeths-Puffer High School, Muskegon Risers fans are able to set up chairs near field level and watch their team up-close and personal, as opposed to being perched in grandstands.

Of course there is plenty of bleacher space as well, but fans have the freedom to be as close to the action as they desire.

The Risers enjoy that type of intimacy, and are hoping to duplicate it at a new
outdoor stadium in the downtown Muskegon area, which they hope is ready for play by the 2017 outdoor season.

Tentative plans have the new field on Mark Dock property, close to the Shoreline Inn off Lakeshore Drive, though nothing is certain, according to Matt Schmitt, the Risers’ President of Operations.

Sport Clips is the official haircut provider for LSJ and sponsor of Muskegon Risers soccer coverage.

“At Reeths-Puffer, everyone is on top of each other and it makes for a fun, high-energy, intimate experience,” Schmitt said. “We’re excited about the fact that we essentially get to put a soccer field downtown and let it sort of grow itself.

“As more and more people come, we’ll continue to adapt in terms of seating, but we don’t want to make it more and more rigid. If we can combine that intimate experience with being in downtown Muskegon, we separate ourselves (in a positive way) from essentially every other program at our level.”

The potential site on Mart Dock property was a foundry site in the past, so the Risers are working with MichCon to deal with the environmental aspects of the project, Schmitt said.

Political and financial red tape are currently preventing the team from finalizing plans or releasing much information to the public, but Schmitt believes the Risers will be playing in downtown Muskegon by 2017.

“There are so many things so close to being finalized that I can’t wait to make this phone call and spill everything,” Schmitt said. 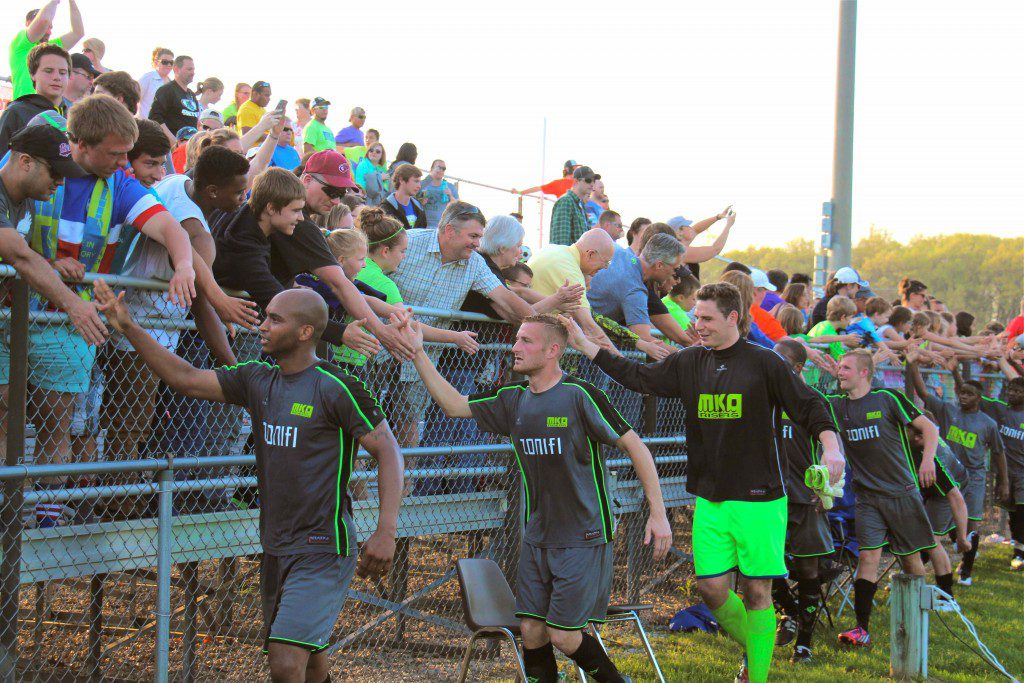 Fans line up to give the Muskegon Risers a highfive after winning their first ever match. Photo/Jason Goorman

The name “Risers” is linked to the team’s desire to represent the Muskegon community, its people and its revitalization efforts, Schmitt said. Having a downtown stadium, which would cost around $100,000, would help the Risers become even closer to the community, he said.

Schmitt noted that local businesses have been supportive of the effort to develop a new stadium. If the project comes to fruition, the playing field itself would be the initial focus, while portable structures such as bleachers and dressing rooms would need to be provided, as well, according to Schmitt.

Schmitt said he has temporarily pushed thoughts of wins and championships further back on his agenda. Impacting the community in a positive manner, for him, is the primary goal of the young Risers.

“We’re not too concerned about the soccer side at this point,” he said. “We just want Muskegon to be the best it’s going to be. It’s right there. I can’t wait to call and tell everybody (about final stadium plans), but we’re just not quite there. We’re 98 percent there, it’s the last two percent that we need.”