The veteran skipper surpassed the 500-win milestone last April with the Lakers, but there’s one accomplishment that’s eluded him throughout his tenure – a postseason regional championship.

Core might have the team this spring to end that regional drought – and perhaps advance a lot farther in the state tournament. 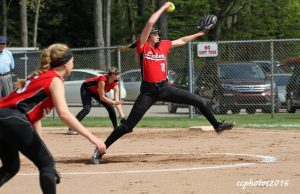 Lauren Somers winds up to deliver a ptch for Spring Lake. Photo/Carol Cooper

The Lakers are “clicking” in every area, and the proof is crystal clear in their 24-0 record and a No. 4 state ranking in Division 2.

“There’s no time like the present,” Core said, about the possibility at a lengthy postseason run. “We know we have a tough district and we have to keep a focus at taking it one game at a time up to that point. We’re not looking too far ahead. But at the same time, these girls have big goals.”

The Lakers have big goals largely because they’ve had big offensive production this spring. Their hitting numbers throughout the lineup are staggering, with a collective average above .430 and six starters hitting .400 or better through the first 21 games.

The top hitter has been sophomore Madelyn Nelson, who was hitting a red-hot .600 through 21 games. She was an honorable mention All-State selection a year ago and stars at third base and in the pitching circle for the Lakers.

“We pride ourselves in doing everything well,” Core said. “We’re a very good hitting team. But they’re also smart base runners, they’re solid in the field. It’s definitely one of the deepest teams we’ve had.”

Surprisingly, the Lakers are even younger than they were last season when they started three freshmen and finished 28-6 and won a district title. This year their regular starting lineup has two freshmen, five sophomores, a junior and a senior.

That means they should be pretty good for quite a while. 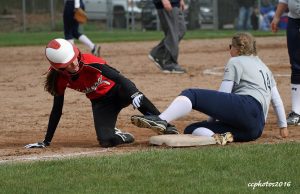 Jenna Core makes it to third base for the Lakers. Photo/Carol Cooper

“A lot of (our success) is because we’re all friends,” she added. “There’s no drama and we all want to be playing softball. We want to play to the best of our abilities. We all have a strong passion for the game.”

Mumby, who has signed to play at Calvin College next season, adds a calming, veteran presence to the team, but Core said most of the underclassmen are playing well beyond their years simply because of their vast experience

“Most of these girls are playing travel softball and I’d say for most, softball is their No. 1 sport,” Core said. “They’re playing 30-40 games a summer. I hate to say it, but I’m the one reaping the benefits. Their parents are trucking them all over the state to tournaments during the summer, but in the spring, it’s paying off here at Spring Lake.”

If there’s one wild card with the Lakers, it’s their pitching staff, and even that’s not much to fret about. Core said they don’t have a true No. 1 ace pitcher, but the Lakers have three very solid options in Nelson, freshman Leah Vaughan and sophomore Lauren Somers.

Combined, the trio had 118 strikeouts, 33 walks and allowed only 40 earned runs through their first 120 innings.

“We don’t have any fireballers, but we’re striking out five to nine per game,” Core said. “They’re very steady.” 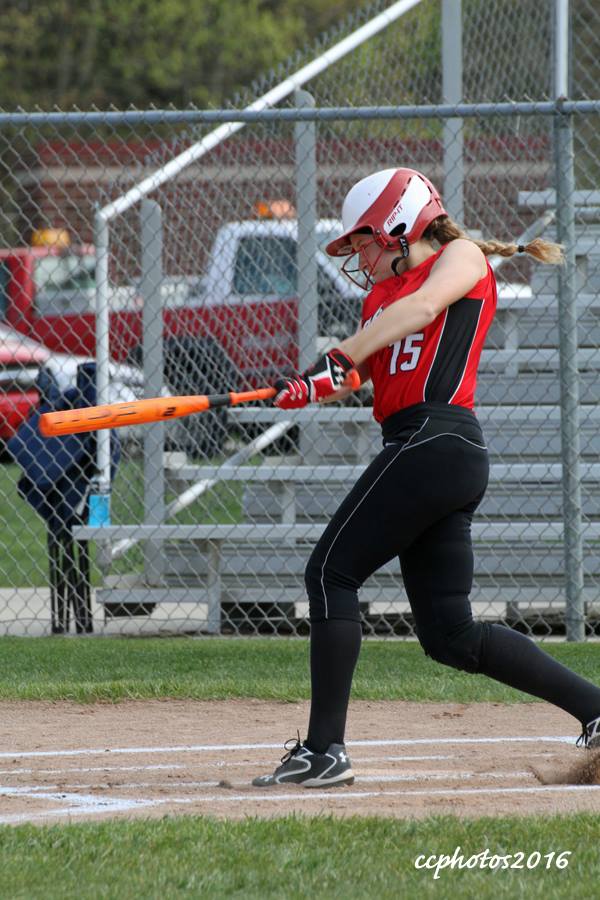 Core said he’ll cross his fingers that the Lakers can remain healthy the rest of the season. The injury bug bit recently when second baseman Linsey Paggeot suffered a dislocated kneecap, and her status going forward is uncertain. She is the Lakers’ third hottest hitter with a .500 average.

“It creates a scenario where the next player up has to step up and fill that role,” Core said.

Other key contributors for the Lakers through the first 21 games included sophomore speedster Lauren Hellman, who was hitting .500 with 20 stolen bases; junior shortstop Ann Marie Galloway, who was hitting .385 with 23 RBIs; and freshman Jenna Core, the coach’s daughter, who had a team-leading six home runs.

Spring Lake will find out a lot about itself in several key upcoming contests, including a showdown against Oakridge, another unbeaten team, on June 2.

“We’ve definitely thought about how far we can go (in the postseason),” Mumby said. “Who wouldn’t dream about playing at Michigan State (in the state finals)?

“I’m really happy the way this season is going,” she added. “It’s definitely the way I wanted to go out as a senior. I love this team so much and I don’t want it to end.”