MUSKEGON – After suffering three straight losses on the road to start the season, the Muskegon Risers will finally get a chance to play for their home fans with a game against CKS Warta on Saturday at 6 p.m.

The Risers, who currently play their home games at Reeths-Puffer High School, fell in succession to Detroit City FC by a score of 5-1, Grand Rapids FC (1-0) and Oakland Country FC (4-1) to open the second season in club history.

“Even though it’s disappointing to be 0-3, that’s a really, really hard start to the schedule and we have a very inexperienced roster,” Ritsema said. “Not trying to give excuses, but I knew before we played a game that it could be difficult to come out with a win in those first three games.”

Sport Clips is the official haircut of the LSJ and sponsor of Muskegon Risers soccer coverage.

The Risers struggled to create offense in the losing trifecta, tallying just two goals in total. The team may require some time to find chemistry, considering the roster turnover following last season.

From the 2015 outdoor team, Muskegon returns just four players, including three who hail from Muskegon – Jube Rodriguez and Ryan Wagenmaker, who both played at Muskegon Community College, and Justin Cartwright, who played at Wartburg College.

The fourth returnee is Matthew Robinson, a South African native who played at Indiana Tech.

With a new coach and a still-settling roster, the Risers are trying to establish an identity.

“I want us to be strong defensively, and we’re getting better at that, but I also want to be very aggressive with attacking, and we’re not there yet,” Ritsema said.

The Risers’ theme of community remains strong in their second season. Of the 28 currently rostered players, just five hail from outside of Michigan, and many are Muskegon-area natives.

“Looking at our team from a program level, it’s extremely important that we maintain a corps of local players and local talent,” said Risers President of Operations Matt Schmitt. “Initially we looked to sort of build the foundation with local players, so there’s an immediate connection with the community. They understand it goes beyond soccer and it in turn helps us be sustainable.” 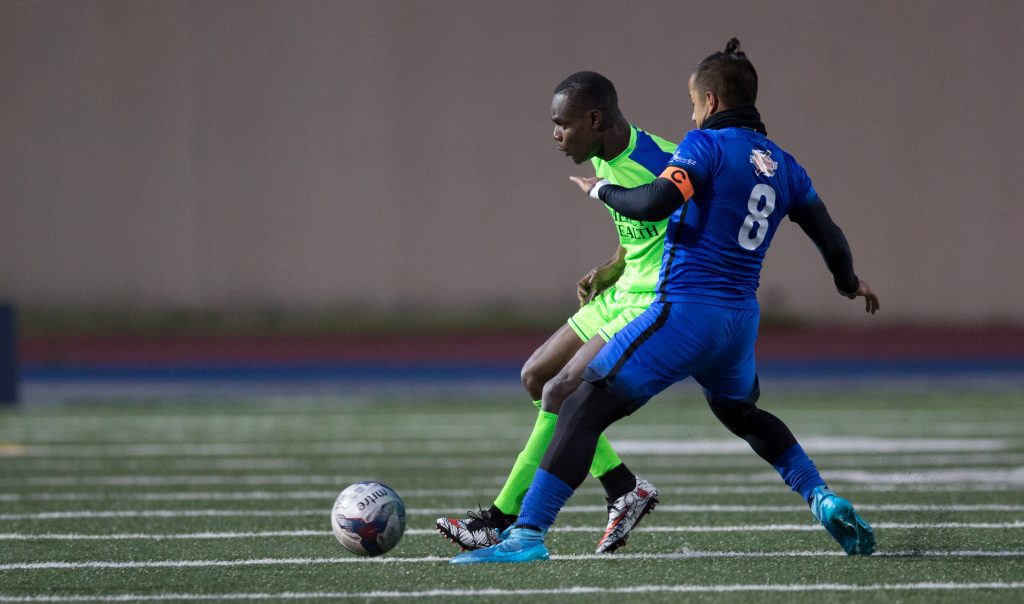 Daniel Luzindya (10) meets Lito Esquivel (8) of GRFC at midfield and fights for the ball in a game last Saturday, May 15 . Photo / Kevin Sielaff

Thus far the Risers’ offensive standout has been Daniel Luzindya from Cedar Springs. Luzindya, an attacking midfielder who also played at Wartburg College, has been involved in both goals this season, scoring one and assisting on the other.

In the middle of the pitch, Ritsema expects Adam Clauss (Grand Haven, University of Detroit Mercy) to be a playmaker.

The Risers play teams from various pro soccer leagues around the Midwest, but will not be in a league themselves again this season. This allows them to schedule games at more accessible times for the Muskegon community, rather than being at the mercy of league schedulers, according to Schmitt.

With the majority of the road games done for the season, the Risers will enjoy an eight-week homestand with games nearly every Saturday until July 23. The Risers tentatively will end their season with a road game against the Milwaukee Torrent on July 30.