MUSKEGON – The West Michigan Ironmen did not face a lot of tough challenges throughout their outstanding 2016 season.

But with just under five minutes left on Saturday in a playoff semifinal game, and the Ironmen down by eight points, they had to rise to the challenge or see their season end. 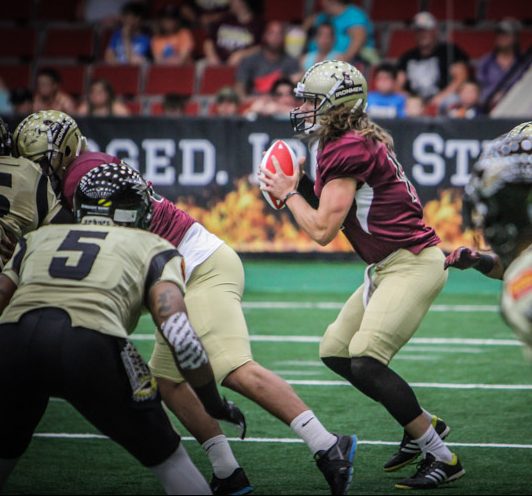 Alex Carder looks through the line for the opening. Photo/Joe Lane

They met the challenge, and now they’re going to play for an American Indoor Football league championship.

A fourth down touchdown pass from quarterback Alex Carder to Donavan Campbell, then another TD pass from Carder to Justin Mott, gave the Ironmen a thrilling 42-35 victory over the Lehigh Valley Steelhawks 42-35 at L.C. Walker Arena and a berth in the AIF Championship Bowl XI.

Two late interceptions by Deonte Hurst, including one in the end zone with 24 seconds left, helped seal the deal for the Ironmen.

West Michigan will travel to Georgia to play the unbeaten Columbus Lions next weekend for the title. A date and time for the game has not been determined.

“It was the type of game I expected,” said Ironmen Coach Ty Lynk. “The guys on both sides are incredible athletes.

“Our guys are a true family and Muskegon is a great community. Tonight was definitely a great night for them. We have had a vision, a vision that we have a chance to achieve next week.”

The Steelhawks opened the scoring with a 10-yard touchdown pass from quarterback Jake Jablonski to Warren Oliver Jr. in the first quarter to give Lehigh Valley a 7-0 lead. 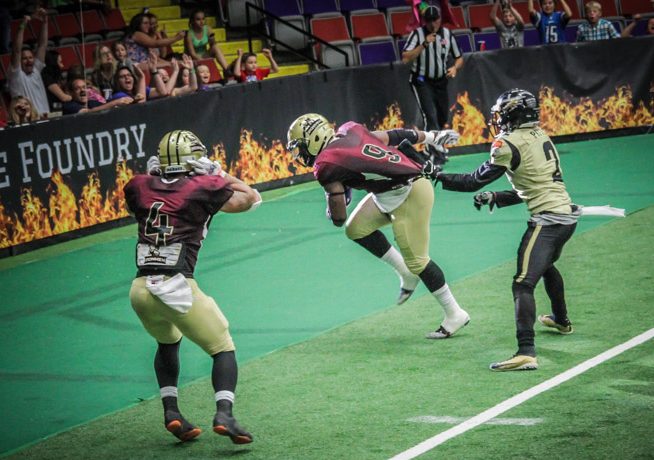 Donovan Campbell breaks into the end zone for the Ironmen. Photo/Joe Lane

The Ironmen responded with touchdowns passes from Carder to Campbell for 6, 22 and 6 yards, respectively, to give West Michigan a 20-7 advantage late in the second quarter.

Lehigh Valley closed the first half with a six-yard touchdown pass from Jablonski to Oliver Jr., leaving West Michigan on top 20-14 at the break.

Mott opened the scoring in the second half for the Ironmen with five-yard touchdown catch to give the Ironmen a 27-14 lead.

But the Steelhawks responded by scoring three straight touchdowns to take a 35-27 lead with 8:47 left in the fourth quarter.

The Ironmen tied the game 35-35 with 4:33 left in regulation on a six-yard touchdown pass from Carder to Campbell, followed by a two-point conversion pass between the same teammates.

West Michigan regained possession after a Hurst interception with 2:21 left, then scored on a 40-yard TD pass from Carder to Mott with 1:04 remaining. The PAT kick by Jamie Potts gave the Ironmen their final margin of victory.

“It was great,” said Mott about scoring the game-winning touchdown. “We have been working hard since day one and we have the best quarterback in the league. He makes us all look good.”

Hurst sealed the win with an interception in the end zone with 24 seconds left. 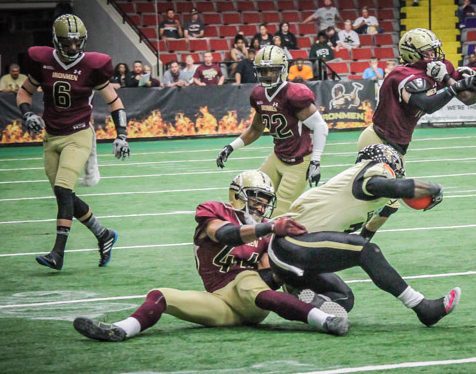 “I could not get it done without my teammates,” said Hurst, who played at Grand Valley State University. “I just happened to be at the right place at the right time.”

Carder threw for 155 yards on 12-for-28 passing with six touchdowns and three interceptions, while wide receiver Campbell had eight catches for 95 yards and four touchdowns.

Mott chipped in with four catches for 75 yards and two scores.