One Columbus fan took a swing at an Ironmen player, one fan grabbed an Ironmen coach by the collar, and several fans were spitting and throwing beer at Ironmen players, Lynk told LocalSportsJournal.com.

Based on all that, Lynk said he made the decision to pull his team from the field and end the game, with about four minutes left on the clock.

Meanwhile, Lynk said he believes the Ironmen should explore the possibility of leaving American Indoor Football and finding another league next season.

“We want our fans to know we did not quit,” Lynk told LocalSportsJournal.com about Saturday’s championship game. “I did everything I could to allow our players to finish the game.

“I couldn’t keep our players out there from a safety standout and feel good about it.”

The Ironmen lost Saturday’s AIF championship game to the Columbus Lions 74-32. They finished the season with a 9-2 record.

Two plays late in the game, and an ensuing series of events, prompted Lynk to pull his team off the field and end the game with 4:08 remaining.

A Columbus player took a swing at an Ironmen player in the end zone with a little over four minutes left in the fourth quarter, Lynk said. 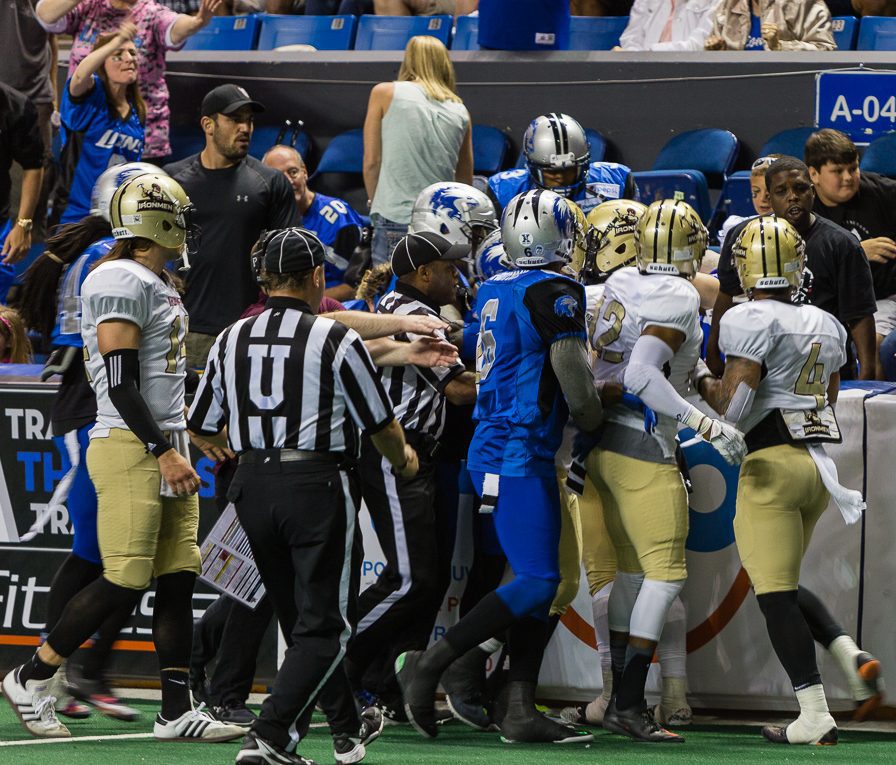 Ironmen get tangled with fans toward the end of the game. Photo/Nathan Leduc Photography

At first the referee called offsetting penalties, which prompted Lynk to call time out and appeal the decision.

“I went to the head official and said this is absolutely absurd, and it’s going to get ridiculous out there,” Lynk said. “The (original ref making the call) finally admitted that the Columbus player threw a punch, and he was finally ejected.”

On the very next play, Ironmen quarterback threw an interception to Columbus’ Chris Smith, who was tackled against the boards by the Ironmen’s Garrett Hoskins, which is perfectly legal. The tackle threw Smith completely into the crowd, while Hoskins landed partially in the crowd.

“One of their fans took two swings at my player,” Lynk said. “At that point everything escalated.”

A pushing and shoving match followed between players from the two teams, and coaches came onto the field to try to break up the confrontation, Lynk said.

But that was not the end of it.

“As one of our coaches was breaking up the fight, another fan came all way the down the stairs, reached over the boards and grabbed (Ironmen offensive line coach Brian Coon) by the back of his collar and started tugging on him and dragging him to the point where he had to break loose,” Lynk said. “The ref was right there and did nothing.

“When we finally had it almost under control, and we were walking back to our bench, several fans started throwing beer and spitting at our players. That started another argument between fans and players – nobody touched anybody – but there was a lot of argumenting back and forth.

“That’s when I made the decision that we were not going to have the opportunity to play the rest of the game in a safe environment.”

The bizarre situation at the championship game was the latest in a series of odd incidents that have involved the Ironmen over the course of their inaugural season.

Several teams that were put on their schedule played only a handful of games during the season, and provided no serious competition for the Ironmen.

In one game, the Ironmen defeated the Cincinnati Bulldogs 107-0.

In the final week of the regular season, the Ironmen were scheduled to play Chicago for the Northern Division championship in Chicago. But the Chicago club forfeited a few days before the game, leaving the Ironmen with a hollow championship victory.

While Lynk did not specifically mention any of those situations, he acknowledged that he is no longer convinced that the Ironmen are in the right league.

“I can tell you on the record, I will do everything I can to find out if this (league) is the right fit,” Lynk said. “At this point I don’t’ think it is – but I’m just the coach, not the owner. I think Muskegon and our players deserve better.”