MOUNT PLEASANT – When you make a deep run into the state tournament, the smallest miscues can lead to defeat.

The Muskegon Catholic baseball team was reminded of that the hard way on Tuesday. 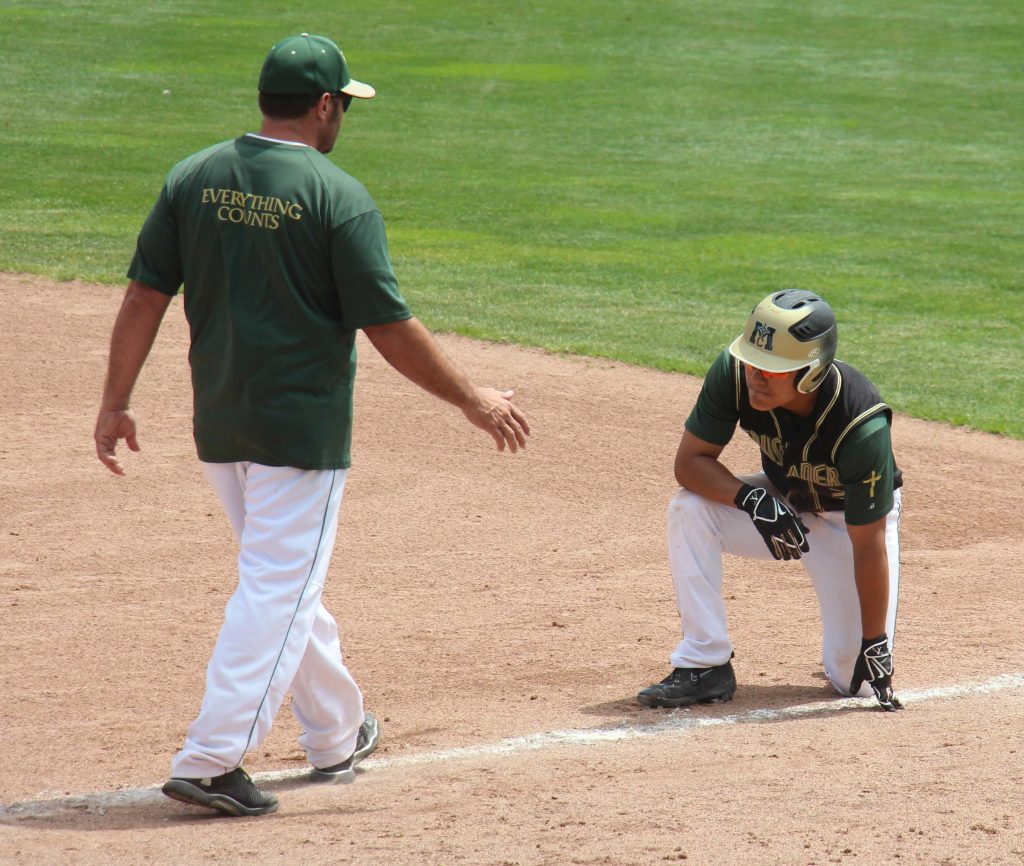 Norberto Vasquez kneels after getting out at first while coach Mike Holt goes to talk with him. Photo/Dave Hart

The Crusaders’ bid for a second straight state title ended in tough fashion in a 3-2 loss to Portland St. Patrick in the Division 4 state quarterfinals at Central Michigan University.

MCC was hurt in the close contest by a misplayed ball in the outfield that led to a Portland run, and a lost opportunity with the bases loaded when a Crusader hit into a double play.

MCC, which won the Lakes 8 Conference title and district and regional championships, finished with a 35-8 record.

“That was very tough,” said MCC Coach Steve Schuitema. “We kind of lost in the first inning when we got behind against a very good pitcher. I told everyone it was going to be a 2-1 or 3-2 game.”

Schuitema noted that his team advanced to the quarters after returning only two starters from last year’s state title team. 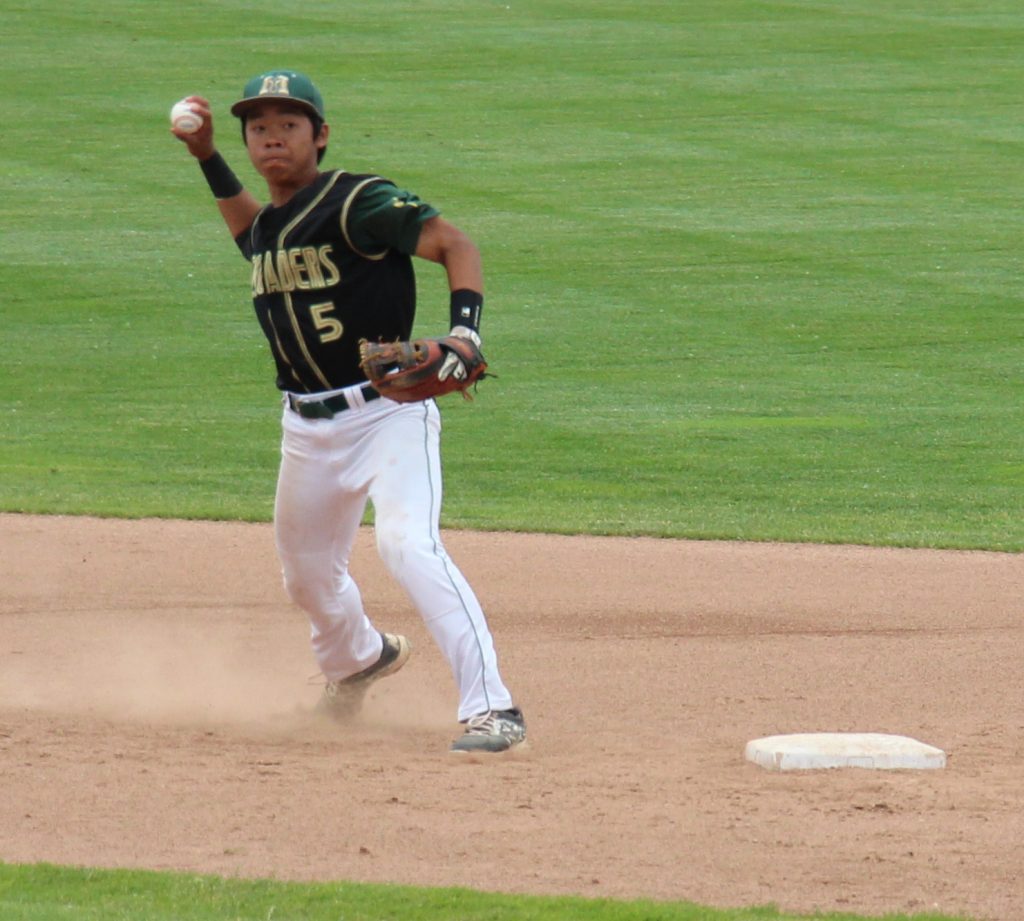 An Pham makes the play at shortstop for MCC. Photo/Dave Hart

“We’re going to miss Jacob Holt and John Sanocki, but we should be good again next year.”

Holt, a senior All-State catcher, said it was tough to end his career with a close loss, so close to a repeat state title.

“We played well through seven innings against a very good team,” Holt said after the game. “Their pitcher was on today. We couldn’t get anything going on the offensive side.

“It was just tough to end like this. In the beginning of the year I don’t think anybody expected us to go this far. But coming into this game we were playing well and clicking.”

The Crusaders fell behind 2-0 in a tough top of the first inning.

Portland’s first batter singled and the second was hit by a pitch.

Travis Moyer followed with a fly ball to center field that was dropped by a Crusader outfielder, allowing Garrett Pline to score for Portland. 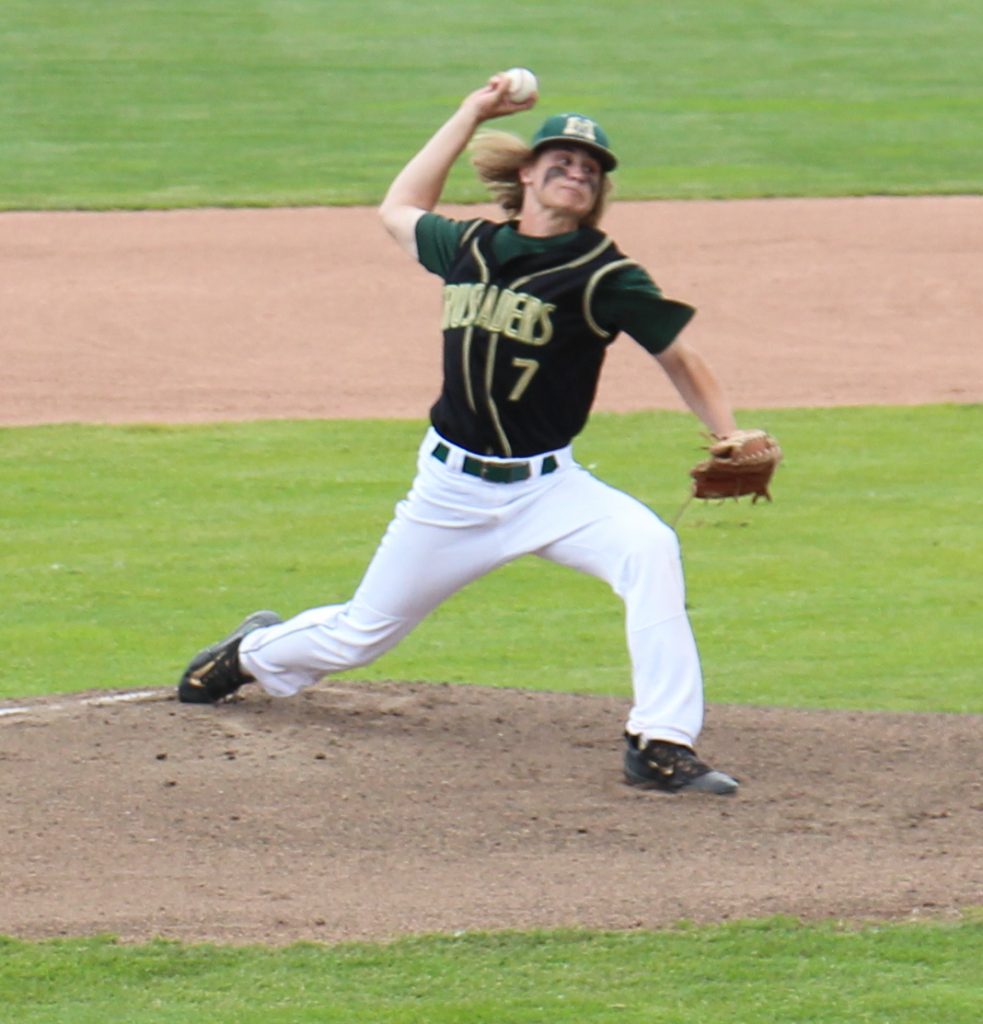 Devin Comes delivers the pitch for the Crusaders. Photo/Dave Hart

MCC pulled within a run in the fourth inning when Holt singled, advanced to second on a groundout, took third in a wild pitch, then scored on a groundout by John Sanocki.

Portland pulled ahead 3-1 in the top of the sixth inning on an RBI double by Nick Conyne down the third-base line.

The Crusaders had their biggest chance in the bottom of the sixth, when they loaded the bases with nobody out after Cole Charlesworth and Devin Comes singled and Holt was hit by a pitch.