MUSKEGON – The Muskegon Clippers headed into the 2016 season with one really pressing need – finding a replacement for standout shortstop Connor Seymour.

Luckily they found that replacement – from an unusual place, in an unusual way. 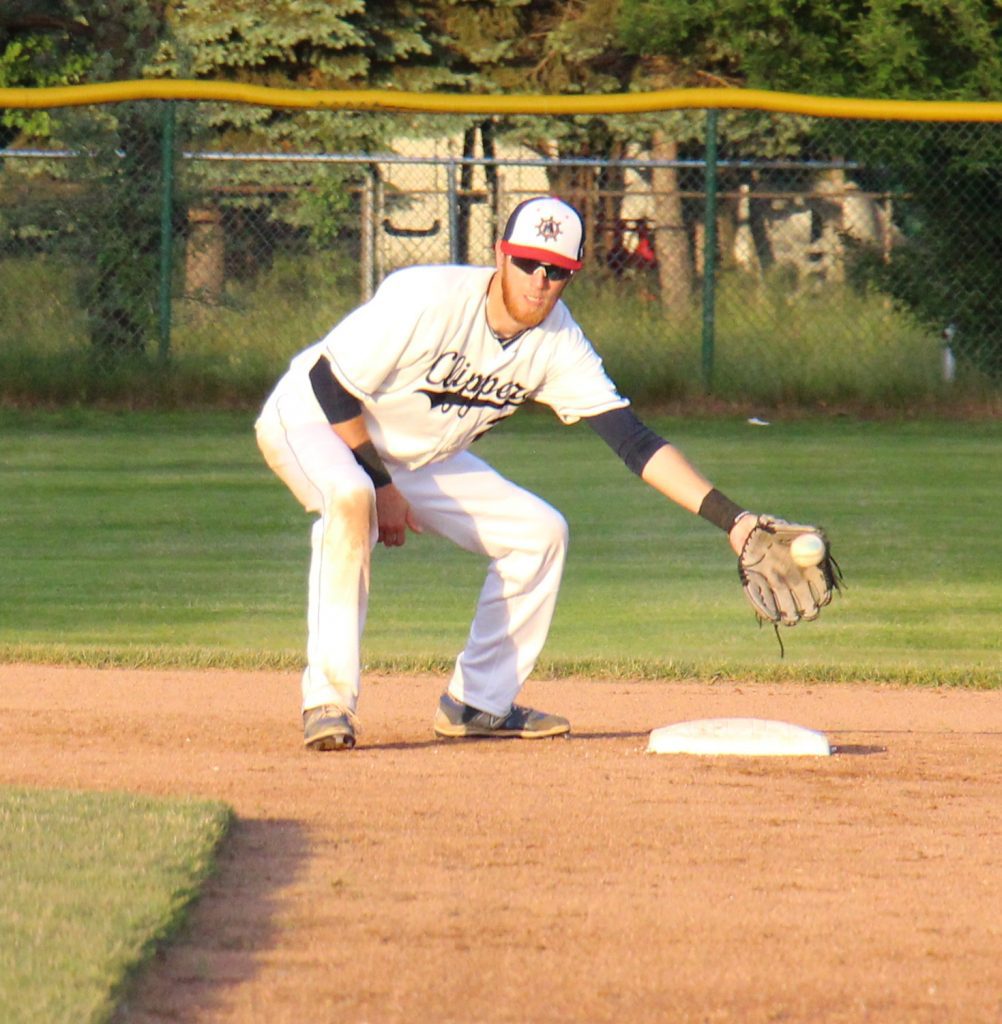 Logan Fleener holds his glove above second base to catch the throw from home. Photo/Jason Goorman

Logan Fleener, who plays his college baseball at Roosevelt College near Chicago, was recruited to play for the Clippers, thanks to his uncle, Greg Fleener, the boys varsity soccer coach at Oakridge High School.

Uncle Greg contacted Clippers Manager Walt Gawkowski about the possibility of having his nephew play for the team this season. The timing was perfect for Gawkowski, who was wondering who was going to fill Seymour’s shoes.

“I contacted him on Facebook and told him my nephew plays shortstop and was looking for a place to play,” said Greg Fleener.  “I sent him an article about him being first team All-Conference at Roosevelt University, to show he was capable of playing and that I was not just pushing for a family member.”

“My uncle knew the Gawkowskis from church and through my grandparents,” said Logan Fleener, who was dealing with a thumb injury when he reported to Muskegon this spring. “I did not know if I was going to play but Walt (Gawkowski) said that he needed a shortstop, so when I was cleared to play I made the decision to come over here.”

Fleener has been a great addition to the Clippers, gobbling up pretty much everything hit his way at shortstop and second base, and providing an offensive spark at the leadoff position in the batting order.

On July 11th against the Holland Millers, for example, he blasted a three-run homer to help the Clippers really for a victory and preserve their perfect league record. 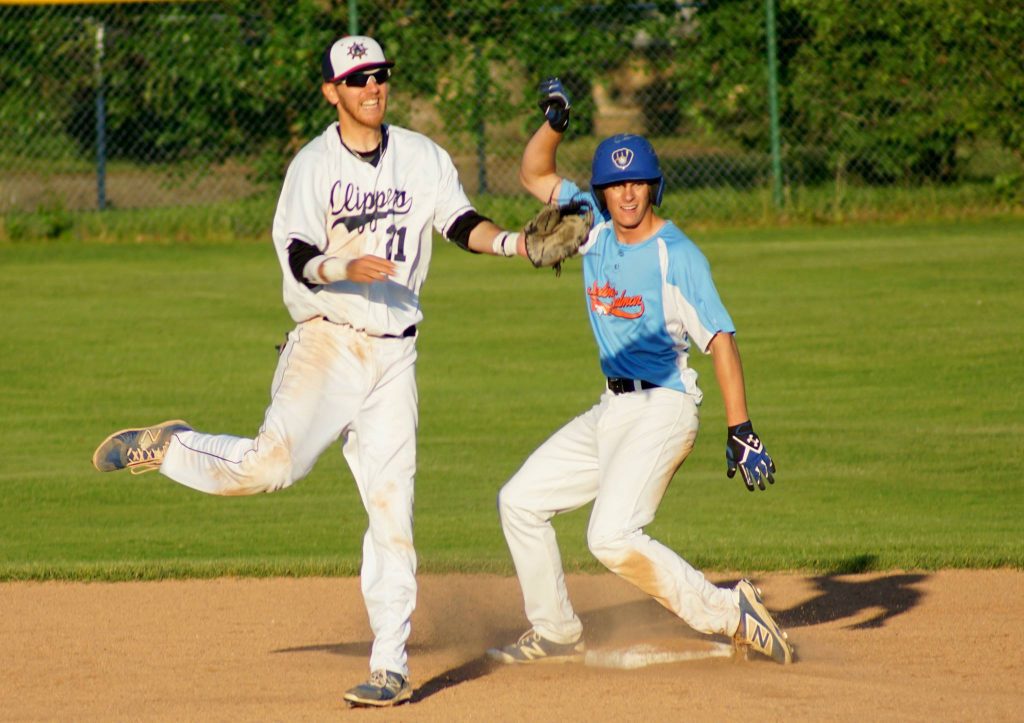 Fleener reacts after making the throw to first base. Photo/Leo Valdez

Since then the Clippers have finished the regular season with a second consecutive Michigan Summer Collegiate Baseball championship.

Now the team, which was 22-2 overall and 22-1 in the league, is preparing for the National Amateur Baseball Federation regional tournament at Marsh Field, scheduled for Thursday through Sunday.

The winner of the four-team, double-elimination tournament will advance to the NABF World Series in Toledo later this month.

The Clippers will open the tournament with a 5 p.m. game on Thursday. The draw to determine the matchups will be Wednesday evening.

“We came here to win the World Series, but before we can do that we need to take care of business in the regional,” Fleener said. “It’s nice that we can play at home in front of our fans. That will definitely be an advantage. We are all ready to go. This is what this season has been all about.”

Fleener has Muskegon connections beyond his uncle.

His father, Mark Fleener, was originally from Muskegon and played high school baseball at Mona Shores. He eventually moved his family to Murfreesboro, Tennessee, where Logan played baseball at Blackman High School. 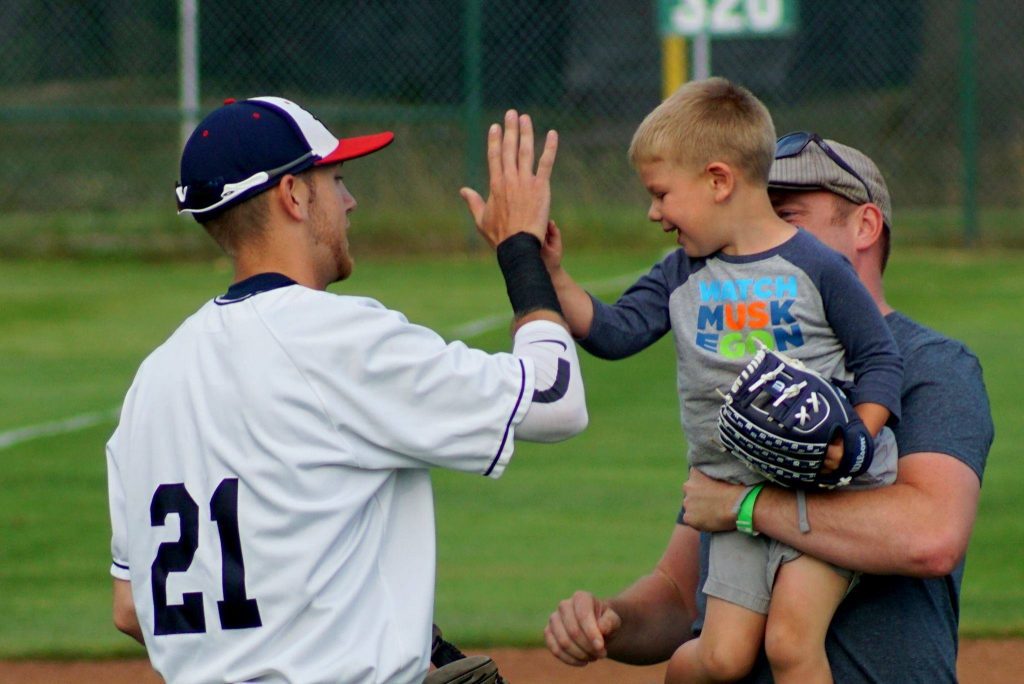 Fleener gives a young fan a high-five after a Clippers win. Photo/Leo Valdez

In four years at Blackman, Fleener’s team won two regional titles. He was All-District as an infielder from his sophomore season through his senior year.

“The conference we competed in had a lot of Division 1 athletes,” Fleener said. “There was a lot of good competition that got me ready for the next step.

“I gained the mindset that this game is not always easy, it’s a tough game.”

“Those seasons were really fun,” he said. “We were not as good as we wanted to be, but we got better every year and the team is currently improving.

“No matter what the score was we always respected the game and tried to play the right way.” 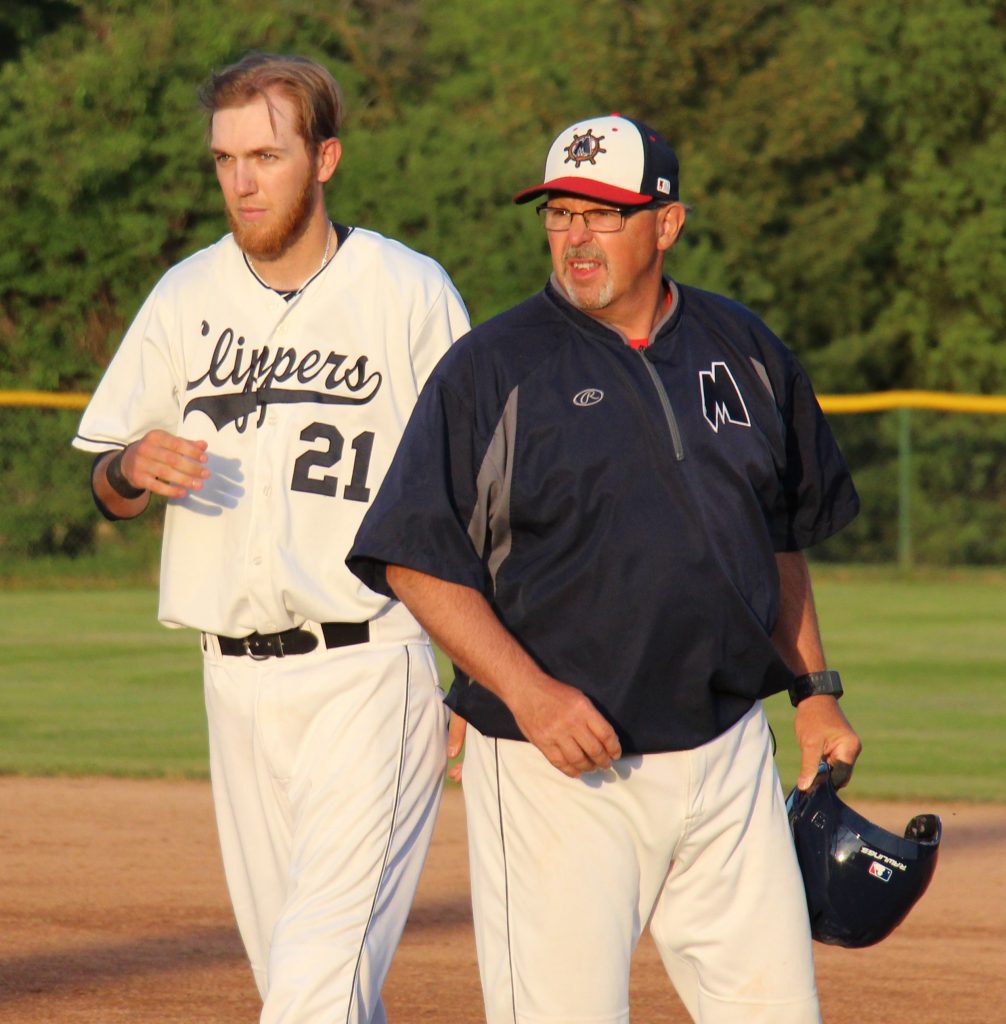 Fleener transferred to Roosevelt College, an NAIA school that recently finished its sixth season of baseball. He was the one of two Roosevelt players to be named All-Conference after the recently-completed 2016 season. They were the first two players in school history to gain the honor.

Fleener is not a typical-looking athlete. He’s tall and skinny, with a 6-3, 175-pound frame.

And his batting stance – which he says he copies from Chicago Cubs first baseman Anthony Rizzo – is more than a little unusual.

He turns slightly toward the pitcher with his feel close together and his hands low, with the bat held straight up and down in front of his chest.

He pulls the bat back when he decides to swing, rather than having it cocked behind his shoulder, like most batters.

Despite all of that that, Fleener is a fierce competitor who gets the job done on a regular basis, at the plate and in the field.

“Logan is a kid that gets dirty in the second inning of every game,” Gawkowski said. “If he had his choice he would play seven days a week. He loves to be at the ballpark and I’m impressed with his baseball instincts.

“He has been a great player defensively. He has great soft hands and he has given this team a lift.”