MUSKEGON – Tyler Lane was made to be the backbone of the Muskegon Risers.

Lane, a first-year goaltender for the second-year Risers, represents the community focus the

team stands for, and the type of local talent it wants to attract. 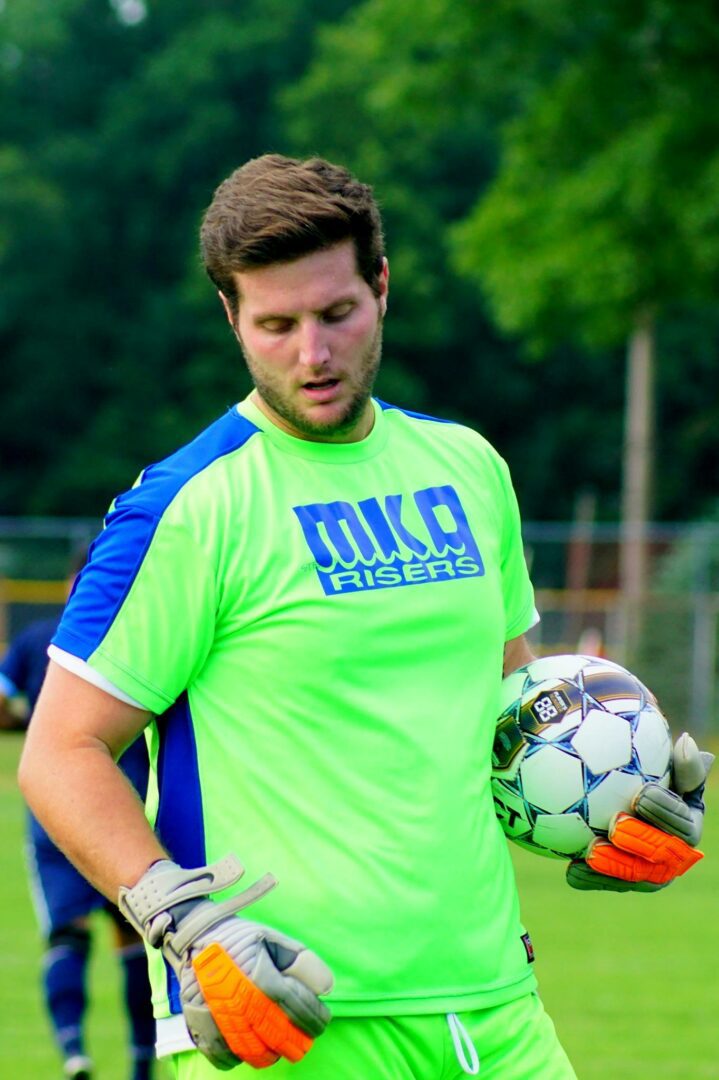 “I’ve known Tyler for four or five years,” said Ritsema, who also serves as the MCC men’s coach in the fall. “He played two years at MCC for me and was all-conference both years.

Lane proved that on June 25 when he picked up the first shutout of his semipro career in the Risers’ 5-0 victory over Fort Wayne.

It was an encouraging victory for Muskegon, which started the season 0-5 but has won twice and tied once in its last three games.

After taking the holiday weekend off, the Risers will resume their season with a Saturday home game against Waza Flo FC at 6 p.m. at Reeths-Puffer High School.

‘He’s actually played well in every game,” Ritsema said about Lane’s shutout. “It was nice for him to get a shutout because he’s played well enough to get other shutouts, but when you play high level teams they always get a goal or two. So I don’t know if it was his best game, but he definitely made some good saves.”

The team’s slow start was not the fault of Lane or the Riser defense, according to Ritsema.

“The issue at the beginning was that we couldn’t score,” the coach said. “We had a bunch of new players and we knew there would be a learning curve. The one thing that has been steady all year has been the guy behind the pipes, and that’s Tyler.” 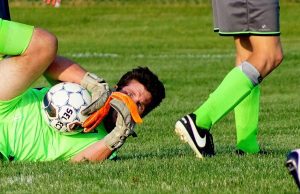 Risers goaltender Tyler Lane peeks out after making a diving save in a game on June 18. Photo/Leo Valdez

Both Lane and Ritsema are WMC grads, though their paths did not cross during their high school years. Lane left his stamp at WMC by contributing to a 2007 state championship during his sophomore year.

Following high school, Lane had opportunities to play college soccer elsewhere, but wanted to stay in the area. He linked up with Ritsema at MCC.

“I was kind of just leaning toward maybe going to school around (Muskegon, and then the opportunity came to play for the Jayhawks. I thought it was a good opportunity around home and I got to play soccer in a community I’m familiar with,” Lane said.

The home-grown opportunities continued earlier this year. Ritsema was tabbed as the new Risers head coach, he needed a goaltender to replace Reece Richardson, and knew just who to call.

“Last fall he was my goalie coach at MCC,” Ritsema said about Lane. “When I got the chance to coach the Risers for the indoor games in the winter, I called Tyler to be the goalie for those, and when I got the permanent job, once again my first call was to Tyler.

“There are several good up-and-coming goalies in Muskegon, but I think he’s the cream of the crop. He doesn’t give up a lot of rebounds, he’s tall and can stretch so far, and he works extremely hard.”

Communication, leadership, sure hands and shot blocking define Lane’s on-field strengths. While serving as the Risers’ lead goaltender, Lake also fills the role of goalie coach, since the team doesn’t employ an official one.

It’s difficult to say whether or not running those drills helps Lane in any particular way, but Ritsema is happy with the results.

“His leadership has really grown the last several years I’ve known him,” Ritsema said. “He’s not a big ‘rah-rah’ guy, but you don’t really need that. You need him focused and calm under pressure.”

Lane is one of a majority of Muskegon natives who make up the Risers’ roster this year. The team relied on a lot of imported talent in its inaugural 2015 season.

With a number of quality high school programs, Muskegon is a growing mecca for prep soccer. Now the Risers offer something for more for players like Lane – the cream of the crop who want to stay in the area and break into the semipro game.

“It’s great because you always look at all these teams, and this is the type of opportunity that’s never presented itself (in Muskegon) before,” Lane said. “Muskegon has been a little bit of an underdog, but we’ve always had great soccer here.

“I think it’s great for us and the fans too.”