COMSTOCK PARK – Will Maddox is having a great season at the plate for the West Michigan Whitecaps.

And that continued on Friday night, when he contributed another three-hit performance.

But the game against the Fort Wayne TinCaps – a 3-2 loss in front of 7,055 fans at Fifth Third Ballpark – won’t be remembered as one of Maddox’ best.

The prolific young hitter, who is second in the Midwest League batting race with a sizzling .347 average, found himself in the middle of two potential rally situations, but came up short each time.

The first came in the bottom of the third inning, which began with West Michigan trailing 3-1.

The Whitecaps opened the inning with back-to-back singles from Derek Hill and Rashad Brown. Hill crossed the plate when Maddox hit a bloop single to left field, making the score 3-2. 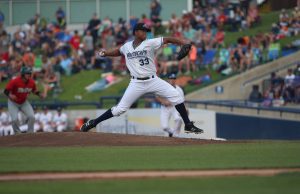 But the rally was cut short when Will Allen hit a ground ball to second base. Maddox attempted to break up the double play, but was called out for interference at second, which also caused Allen to be out. Brown was forced back to second base, even though he had advanced to third on the play.

Shortstop Brett Pirtle flew out to end the Whitecaps’ threat.

The score remained 3-2 in the eighth inning.

The Whitecap’s Rashad Brown led off the bottom of the inning with a walk, then Maddox, who already had three hits in the game, attempted to bunt, but ultimately popped out in foul territory to the catcher.

The next two batters were retired easily, ending another scoring opportunity for the Whitecaps.

When asked after the game if Maddox’s bunt attempt was a mistake, considering his hot bat, Whitecaps Manager Andrew Graham said Maddox was just trying to do what was best for the team. 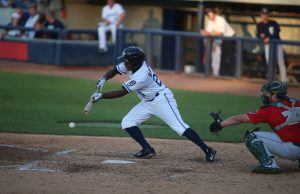 “It was on his own, it wasn’t from me,” Graham said. “Will was ultimately trying to do his job and get the runner over, but unfortunately popped it up. We had the hit-and-run on earlier in the at bat, but he fouled the pitch off. Will was just trying to do what was best for the team.”

Friday’s loss was the second straight for the Whitecaps following a four-game winning streak. They are now 45-36 on the season and 6-8 in the second half.

The Whitecaps were frustrated by Fort Wayne pitcher Thomas Dorminy, who went six innings, allowing two runs on eight hits while striking out one batter.

“It’s one of those games, we had a pretty good arm going against us,” Graham said. “You can’t win them all. We had some opportunities but just didn’t get it done.”

Maddox finished with a 3-for-4 night with one RBI for the Whitecaps. Brown and Jose Zambrano each added two hits for West Michigan, which will continue its series with Fort Wayne at Fifth Third Ballpark on Saturday at 7 p.m.