CALEDONIA – The Grand Haven volleyball squad is having another great season.

But the Buccaneers were reminded on Thursday that they won’t be able to just show up in and win in the tough O-K Red Conference.

Grand Haven grabbed an early one-set lead, but proceeded to lose three in a row and the match to host Caledonia, a new team in the O-K Red that looks like it will be a formidable opponent.

The Buccaneers, who entered the week ranked 10th in the state in Class A, dropped to 33-7 overall and 2-1 in conference play.

“I was happy how we came out the first set,” said Grand Haven Coach Aaron Smaka, whose team beat Caledonia in a tournament earlier in the season. “I think Caledonia started passing better and their two outsides (Lauren VanderWal and Gaby Harper) really hurt us. We made adjustments (in the fourth set) but we had trouble defending them tonight.”

Grand Haven played without the services of standouts Katie Cole and Libby Cole, who were out of the lineup for undisclosed reasons.

Their absence clearly made a difference for the Bucs, who failed to put the match away after winning the first set and gaining an early 5-2 lead in the second.

“It’s a team issue,” said Smaka about the missing players. “The kids on the floor did an awesome job, including Ashley Hall. We needed, however, to stop some runs and take care of first contact.

“We have to get ready for Rockford on Tuesday, so we have some work to do because Rockford is really good.”

The Buccaneers opened the first set strong, jumping out to an 8-2 advantage on a service run by Claire Holman and strong play at the net by Morgan Ross.

Caledonia fought back and trailed 22-20 before Grand Haven scored the final three points to claim the first set.

But that was the last set the Bucs managed to win.

The Fighting Scots overcame an early 5-2 deficit in the second set and led by as many as five points. The Buccaneers cut their deficit to one point, 22-21, but Caledonia scored the final four points to even the match 1-1.

The Buccaneers overcame a pair of four-point deficits during a long and hard-fought third set, but were outscored 7-5 after tying the score at 22-22.

The Fighting Scots erased an early 7-3 deficit in the fourth set with a long service run by Micaela Rundhaug to take a 15-9 lead, and cruised to the victory from there. 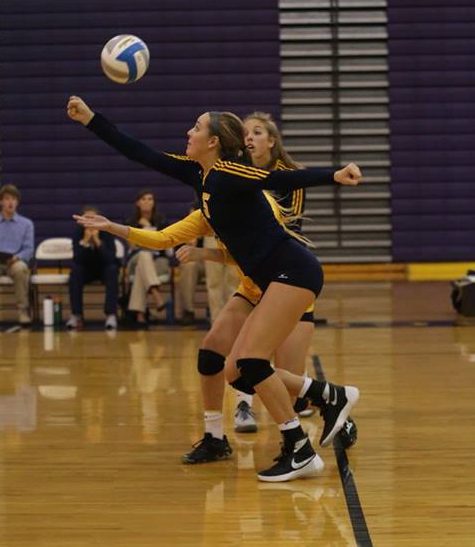