MONTAGUE – The city of Montague has a population of just over 2,300 residents, and small towns generally produce limited numbers of high school football players.

That’s very much the case this season for the hometown Wildcats, who will dress around 20 players for most games.

With a small pool of talent to choose from, finding skilled quarterbacks, year after year, should be a daunting task. But Montague has managed amazingly well in that department.

It started with Cody Kater – arguably the best signal caller to ever play at the school – who led the Wildcats to back-to-back state championships in 2008-09.

And Kater continues to contribute. Now in his second season on the coaching staff at Montague, he has proven to be a tremendous mentor to the most recent Wildcat quarterbacks – All-Stater Jacob Buchberger, who is now playing at Davenport University – and this year’s new starter, Dylan Stever, who has turned a lot of heads with his outstanding play over the first two weeks of the season. 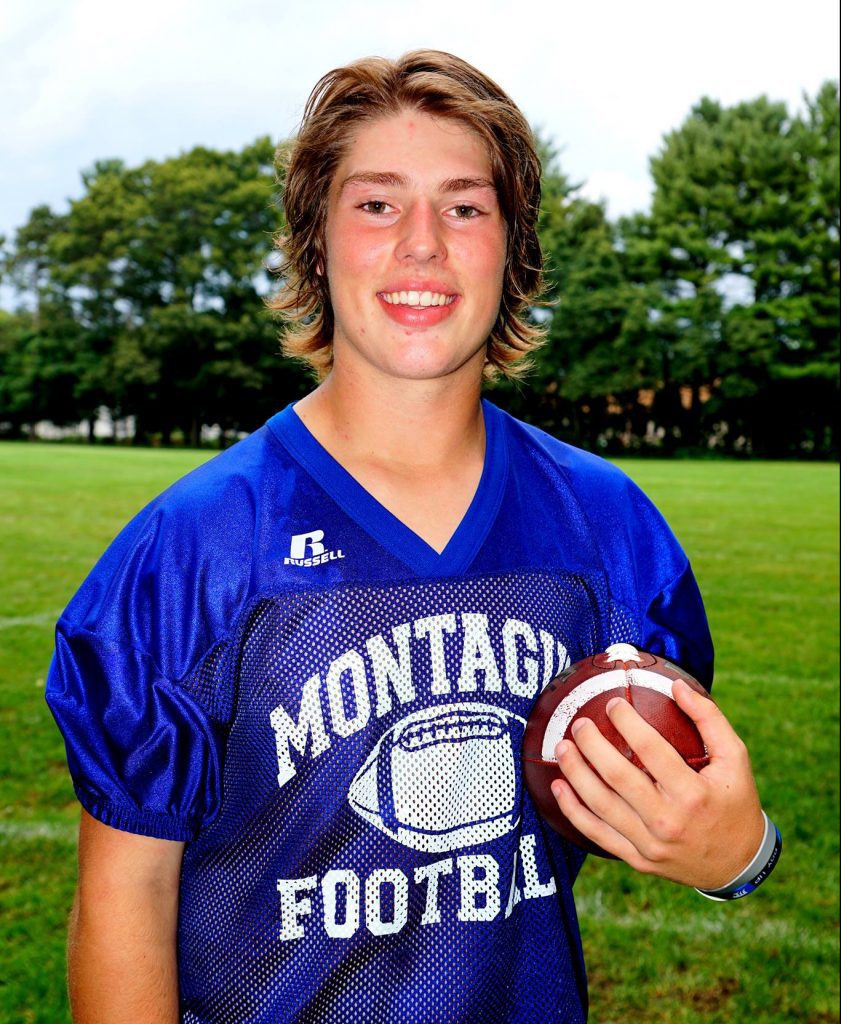 Stever has guided the Wildcats to a 2-0 start with nine touchdown passes and no interceptions.

He caught everyone by surprise in Week 1 by throwing for 246 yards, including six touchdowns, in Montague’s 51-14 win over Orchard View at Grand Valley State University. He continued his success last week, throwing for 156 yards and three more touchdowns as the Wildcats beat Ravenna 35-7 in their West Michigan Conference opener.

Stever is a diamond-in-the-rough who was never groomed to be a quarterback, but has adapted quickly to the position with expert coaching.

Stever said he was encouraged by varsity offensive coordinator Dan French to throw some passes with him after track practice when he was an eighth-grader.

“I was a lineman throughout middle school, but Coach French asked me if I wanted to throw some footballs to him,” Stever recalled. “He told me the JV team was looking for a quarterback the next season and wanted to see what kind of arm I had.”

What Montague head coach Pat Collins, along with Kater, French and otherssoon discovered is that Stever has a very strong arm.

“He can spin the ball pretty well,” Collins said. “And he’s an athletic kid. He’s a three-sport kid who also plays baseball and basketball.”

Stever learned the ropes at quarterback while leading the junior varsity team as a sophomore, then serving as Buchberger’s backup last season. He became Kater’s prize pupil throughout this past off-season.

“We’ve been working with (Kater) since the winter,” Stever said, referring to himself and backup quarterback Sebastian Archer, a sophomore. “We’d come in for 6 a.m. workouts and he’d be there with a smile on his face.

“I’m very thankful at having the opportunity to learn from somebody like him. The thing about Coach Kater is, he knows football very well. He’s been around it. He knows how to get the best out of us.”

Stever has become the latest success story on the assembly line of quarterbacks at Montague. Collins said the process involves building players’ confidence in certain areas of the position and never throwing too much at them at once.

So when Stever struggled somewhat with turnovers during 7-on-7 drills during the summer, Collins sat him down, told him to relax, and focused on helping him with his footwork.

Collins said he’s tried to keep Stever in low-risk situations through the early weeks of the season, but the new QB will be asked to do more, and will have a bigger chunk of the playbook thrown at him, as bigger challenges approach on the schedule.

Stever has had plenty of help in the Wildcats’ early victories, He said he’s been thrilled with offensive teammates who have stepped up their games, including senior receiver Josh Weesies and running backs Eddie Caviedes and Bryce Stark.

“Josh is just super strong; he can dominate the game in so many ways,” Stever said about Weesies. “With Eddie, he’s been on varsity three years now, so he knows what to expect. He’s just super quick. He can cut and hit the hole very well. And with Bryce, he does things so well, you forget he’s just a sophomore.”

The offensive line has kept Stever safe in the pocket, despite having the team’s top two linemen – Kyle Koetje and Luke Marsh – currently out with injuries. Koetje is week-to-week with a knee injury, while Marsh broke his fibula in the season opener against Orchard View.

“We’re a small town,” Collins said. “We don’t have the luxury of a lot of depth at some positions. But what we have is a group of tough kids. They’ve got grit and play with resilience, which are two key things you need on the football field.”

Collins said this year’s squad has the potential to match or exceed last season’s magical campaign, which included a 9-0 regular season, a West Michigan Conference championship, and a victory in the playoffs.

“We need some playmakers to emerge, and you can say we have a chance to get there with Dylan and others,” Collins said.

Stever said the work ethic throughout the Wildcat program changed following a 2-7 season in 2014.

“After that season wrapped up, nobody wanted to experience what a 2-7 season felt like again,” he said. “Nobody wanted to let their community down again. We even had a sign in our weight room that said, ‘Do you want to be 2-7?’

“Last year was Team 119 (in the history of the program), but that’s done. This is Team 120, and we believe we can do great things, but it’s going to take everyone giving it their all and putting in work at every practice. We don’t have big numbers like they have at other schools. Our numbers are really down this year.”