There will always be intensity when Mona Shores and Reeths-Puffer meet on the football field, regardless of team records in any given season.

The cross-town rivals don’t like each other, and really want to beat each other, year after year. 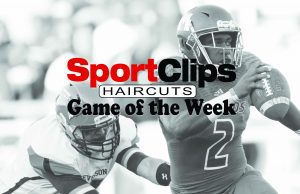 But Mona Shores has had the definite advantage the past two years, beating Reeths-Puffer 42-12 last fall and 55-6 in 2014.

The programs were headed in different directions.

The Sailors were experiencing the greatest two-year period in the history of their program, winning two straight O-K Black Conference titles in 2014-15, posting a combined 22-3 record in those seasons, and advancing to the Division 2 state finals in 2014.

The Rockets, meanwhile, struggled to 3-6 records both years.

But the matchup might be a lot more even on Friday night when the Sailors and Rockets go head-to-head at 7 p.m. at Reeths-Puffer. Both teams are hoping to remain in the O-K Black title race, and gain a precious victory in their hunt for six wins and a postseason playoff berth.

The Rockets believe they are better than they were the past few years, and more prepared to give the Sailors a run for their money. Reeths-Puffer enters the game with a 2-1 overall record and a 1-0 mark in the O-K Black.

They opened the season with a heartbreaking 21-20 last-second loss to Grand Haven, a come-from-behind 22-19 victory over Orchard View, and an impressive 56-16 stomping of Grand Rapids Union last week.

“There’s no question that we’re improved,” said Reeths-Puffer Coach Kyle Jewett. “A lot of our seniors were thrown into the fire as sophomores on varsity, and now they feel the program is in place.

“Despite losing some games last year, we played a lot of good teams real close. That provided a lot of confidence for our seniors this year.”

Jewett believes the Rockets may have turned a corner with the big win against Union last Friday.

“Last week we had a solid week of practice and it showed in the game,” Jewett said. “It’s time for us to play up to our potential. We’re entering the meat of our schedule. We have to coach better, prepare better and play better – which are all things we’re capable of.”

Jewett said his team is focused on improving every week and winning every game possible, but added that the Mona Shores game is special.

“We take one game at a time, but the kids don’t need any extra motivation when we play Mona Shores.”

The Sailors, meanwhile, come into the game with a 1-2 record, their worst start since 2011, when they finished 1-8.

They opened the season with a 35-12 victory over West Ottawa, then suffered a 32-28 last-second loss to defending state champion Zeeland West and a 37-23 loss to Rockford last week.

“I always talk to our kids about setting goals and two of our goals are to win the conference and make the playoffs, and this game affects both of those,” he said. “Above all we want to win (the conference). The title means a lot to us and our school and community.”

Koziak said the game will be a challenge for his young team, which only returned one starter from 2015. He expects Reeths-Puffer to pose a strong challenge with a lot of seniors on its roster.

“They have a lot of seniors that are playing in their third year on varsity,” he said. “I’ve seen them on film and you can tell they are seasoned. I expect this to be another great game, and it will come down to a last possession and key turnovers.”

Despite the early defeats, Koziak has been impressed with his team’s ability to hang tough in games against very good opponents. At the same time, he said the Sailors have to cut down on mistakes and play more consistently.

“On the other hand, we have seven turnovers in three games and that does not help. Defensively we have to be more consistent getting stops. We had Rockford on a fourth-and-six and we didn’t make the play. We put ourselves in the position to make the play, but we have to get our offense the ball back.”