He was on the ropes on Saturday in the No. 1 singles championship match at the Greater Muskegon Athletic Association City Tennis Tournament at Reeths-Puffer High School. 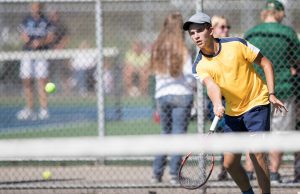 Bobby Tarrant of North Muskegon returns the ball  on his way to a flight championship. Photo/Kevin Sielaff

Tarrant lost the first set to Whitehall’s Andy Esh, 6-1, and was losing 4-0 in the second set. That meant he was two short losses from losing the match and the title.

But Tarrant dug deep and managed to rally and win the second set in a tiebreaker, 7-6. Then he kept his momentum in the third and final set, winning 6-3, to claim the city championship in the top flight of the tournament.

“I just stuck in there mentally,” Tarrant said. “I was just missing shots in the beginning, but I knew if I stuck in there and hustled I could pull it out.

“When I start hitting my shots I know I can beat almost anyone. There was a point (in the finals) when I hit a cross-court winner and I knew I could come back and win.”

The victory completed a trifecta for Tarrant, who won a city championship at No. 3 singles as a sophomore and No. 2 singles as a junior. It also evened his rivalry with Esh, who had won two of the three matches against Tarrant earlier this season.

“We’ve grown up playing against each other and beating each other, for five or six years,” Tarrant said about his rivalry with Esh. “It’s been a lot of fun. I’m just happy I was able to win.”

Esh may have lost the No. 1 singles title, but he was part of a bigger championship on Saturday. 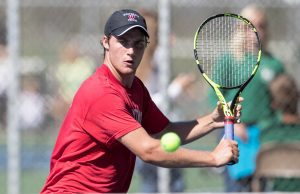 Andy Esh of Whitehall competes in the No. 1 singles title match. Photo/Kevin Sielaff

The Vikings captured championships in five of the eight flights, and had finalists in every flight.

Winning championships for the Vikings were Ben VanSumeran (No. 2 singles), Oscar Hobaek (No. 3 singles), Jacob Herbert (No. 4 singles), Spencer Trnka and Ben Stenglein (No. 3 doubles), and Michael Heylmun and Jackson VanBergen (No. 4 doubles).

Runners-up for the Vikings were Esh (No. 1 singles), Alec Milliron and Judd VanBergen (No. 1 doubles) and Connor Briegel and Andrew Tallquist (No. 2 doubles).

The city title was the first for Whitehall since 2009. The Vikings made up for last year’s city tournament, when they lost the championship to Mona Shores by a single point.

But a city title was not the main goal for the Vikings, who are ranked fourth in the state in Division 4 and are aiming for bigger rewards in coming weeks.

“We play for regionals and use this as a stepping stone, but it was definitely nice to win,” said Whitehall Coach Greg McManus. “We brought back a lot of seniors this year and it was nice for them to bring it home.

“Last year we were really good – we were fourth at the state tournament – but we got a lot of second places. This year we’re getting a lot of first places.”

When asked if a state championship is a realistic goal for his team, McManus said “It’s definitely a goal. We’re within striking distance, but we will have to play our best.”

Photo gallery from the Muskegon Lumberjacks’ shootout win over Youngstown