The West Michigan Whitecaps are now in “must win” mode after losing 6-2 on Thursday to the host South Bend Cubs in Game 2 of their first-round Midwest League playoff series.

The third and deciding game of the series will be Friday night in South Bend. The winner will advance to the Eastern Division finals while the loser will go home for the season. 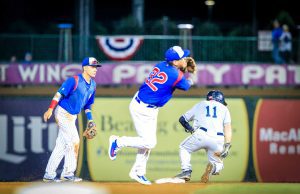 The Whitecaps’ Will Maddox (11) ducks under a throw during a double play for South Bend. Photo/Tim Reilly

The Whitecaps, who are defending league champions, jumped out to an early lead but couldn’t hold it.

Cam Gibson got things going with an RBI single that scored Will Allen to give West Michigan a 1-0 lead in the second inning. The next batter, Joey Havrilak, also hit an RBI single, scoring Brett Pirtle to extend the Whitecaps’ lead to 2-0.

South Bend quickly tied the game up at 2-2 in the bottom of the second inning. The Whitecaps offense sputtered the rest of the night, only managing three hits in the final seven innings.

Meanwhile, South Bend took over offensively, scoring one run in the sixth to take a 3-2 lead, before a , Matt Rose 3-run homer in the seventh gave the Cubs their final margin of victory.

West Michigan was led on the night by Will Maddox with two hits. Starting pitcher Beau Burrows lasted 4 2/3 innings, giving up two runs on five hits, while striking out six batters.

Spencer Watkins will be the starting pitcher on Friday for the Whitecaps.