COMSTOCK PARK – The West Michigan Whitecaps’ hopes of winning back-to-back Midwest League titles came to a screeching halt Tuesday with a 5-2 loss to the Great Lakes Loons in Game 3 of the Eastern Division championship series.

West Michigan led 2-1 in the top of the eighth, and sent relief pitcher Drew Smith to the mound to protect that advantage. But it wasn’t to be.

Great Lakes’ Brendon Davis led off the inning with a single up the middle. Two pitches later, Omar Estevez hit a hanging curveball into the seats, giving the Loons a sudden 3-2 lead.

The Loons added two insurance runs in the ninth inning and left town with the victory.

“That’s playoff baseball,” said Whitecaps manager Andrew Graham. “You cruise and have the lead the majority of the game, then one pitch, a hanging curveball … but we battled the whole way.”

The scoring started in the fourth inning when a Great Lakes error allowed Will Maddox to score from second base to give West Michigan a 1-0 lead. 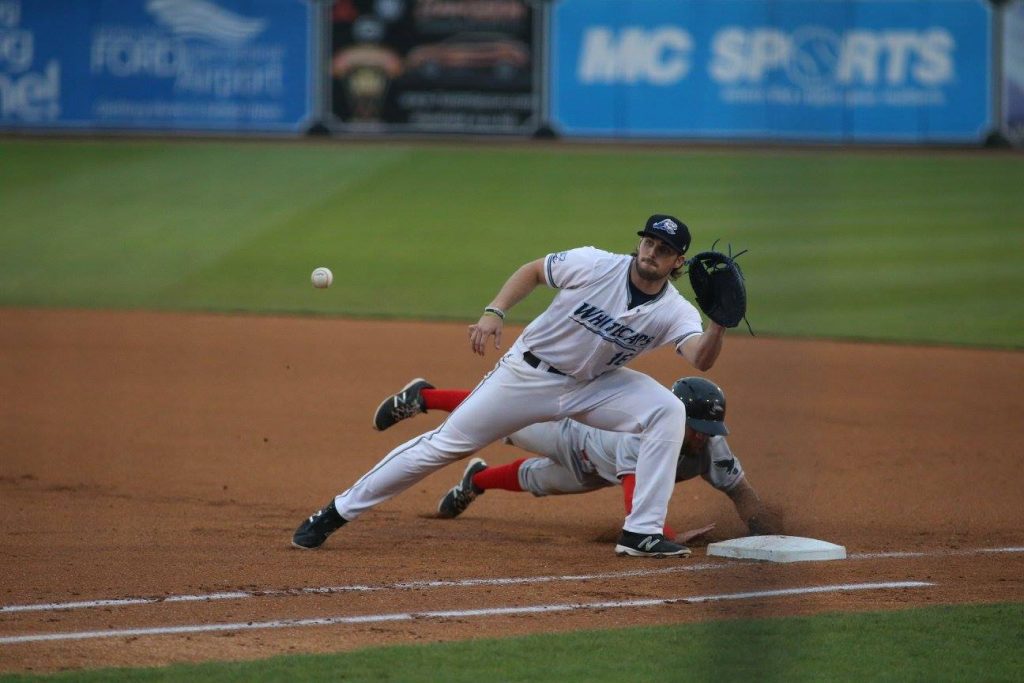 Will Allen tries to make the tag at first base. Photo/Tom Reynolds

The Whitecaps appeared to score again in the same inning when Will Allen slid across the plate on a squeeze bunt by Josh Lester. But Allen was called out by home plate umpire Isaias Barba – a call that Graham did not agree with.

“I’ve already looked at the replay and he was safe,” Graham said. “I understand the umpires, it’s tough to make these calls, and sometimes you make mistakes, but being up by an extra run sometimes changes the dimensions of the game.”

After the Allen out at home, David Gonzalez singled up the middle to bring home Jose Azocar and give the Whitecaps a 2-0 lead. The score remained the same until the seventh inning when Great Lakes’ Jake Henson hit an RBI single to score D.J. Peters and make the score 2-1.

West Michigan struggled to get anything going on offense, totaling only six hits all night, and ultimately fell behind for good when Estevez hit his home run in the eighth inning. 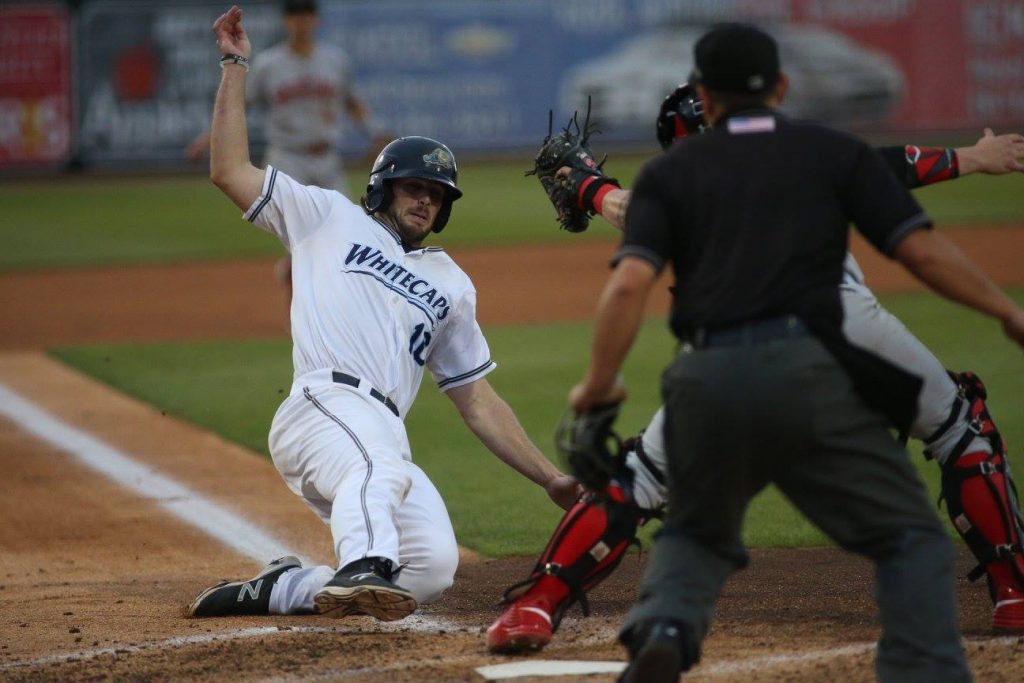 Overall, Graham believes his team improved over the course of the season, and perhaps even overachieved.

“They learned some stuff and developed, it’s all about getting better as players,” the manager said. “They’ve surpassed expectations, making it to the playoffs and going this far.”

Great Lakes will move on to play Clinton in the Midwest League championship series beginning on Wednesday evening. 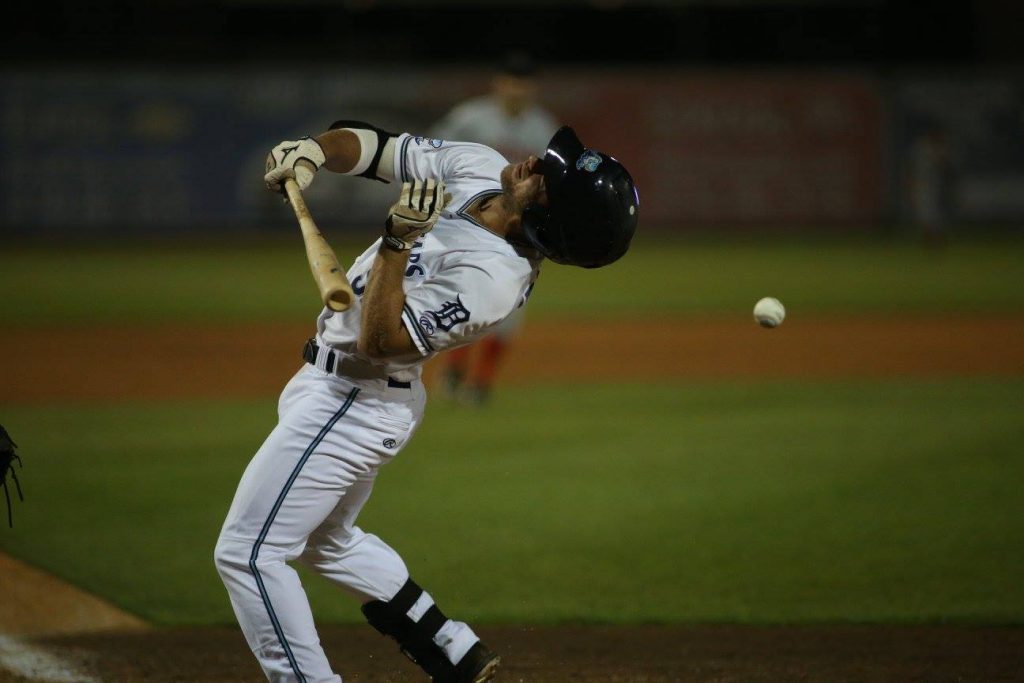 Brett Pirtle gets hit by the pitch. Photo/Tom Reynolds 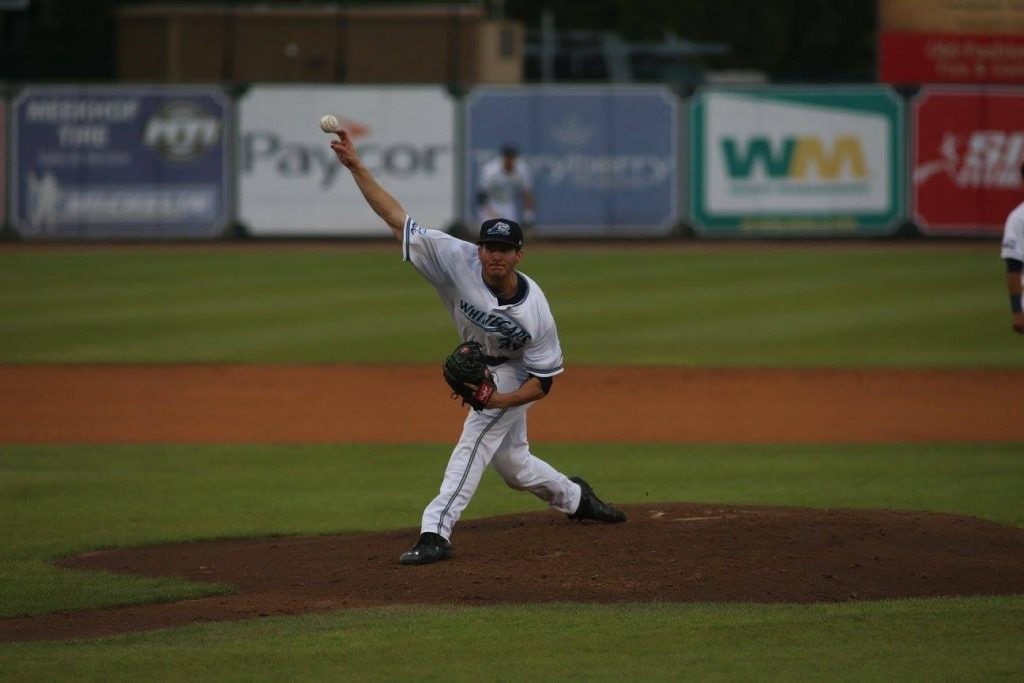 Kyle Dowdy delivers the pitch for the Whitecaps. Photo/Tom Reynolds