COMSTOCK PARK – The West Michigan Whitecaps may not be favorites to repeat as Midwest League champions, but they demonstrated on Wednesday that they’re willing to fight to defend their crown.

They battled a tough South Bend squad to a tie through nine innings, then David Gonzales scored on an RBI single by Jose Zambrano in the bottom of the 11th, giving the Whitecaps an exciting 3-2 walk-off victory in Game 1 of their first-round playoff series at Fifth Third Ballpark. 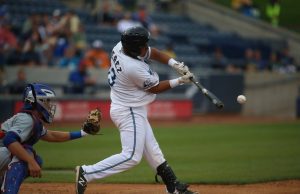 The Whitecaps can clinch the best-of-three series with a victory tomorrow in South Bend. Game 3, if necessary, would be Friday in South Bend. The winner of the series will advance to the Eastern Division championship series.

“Just another game with this team,” said Whitecaps manager Andrew Graham, whose team played below the .500 mark in the second half of the season and came into the playoffs with little momentum.

“These guys didn’t give up, and even though we’re underdogs because of our lack of power, these guys are scrappy and showed fight.”

The winning run came with two outs in the 11th inning.

Gonzalez led off the inning with an infield single and advanced to second on a throwing error by South Bend shortstop Issac Paredes.

With Gonzalez on second and Cam Gibson at the plate facing a 1-0 count, South Bend pitcher Jared Cheek balked, which sent Gonzalez to third base. 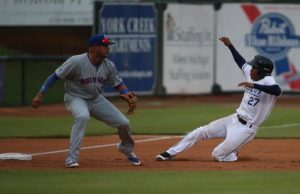 Jose Azocar slides safely into third base for the Whitecaps. Photo/Tom Reynolds

Gibson sharply grounded out to second base, which didn’t allow Gonzalez to score, then Joey Havrilak struck out swinging for the second out.

Then up stepped Zambrano, who hit the first pitch back up the middle for the game winner.

“I was looking first for the fastball,” Zambrano said. “I knew they’d come at me with a fastball. I was very happy when I got the hit to win it.”

The winning RBI allowed Zambrano to redeem himself. He had a similar opportunity to end the game in the bottom of the ninth inning with Gibson on third base and two outs, but he struck out, sending the game to extra innings.

“I was mad but I understand it’s part of the game, and I knew I had to adjust after striking out,” he said.

The scoring started in the second inning when Alberto Mineo scored Eddy Martinez with an RBI single to give South Bend a 1-0 lead.

West Michigan tied the game 1-1 in the second inning on a double steal that scored Jose Azocar. 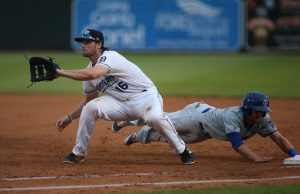 No. 16 Will Allen attempts to make a play at first base for the Whitecaps. Photo/Tom Reynolds

It happened with Gibson at the plate and runners at first and third. Gonzales broke for second, South Bend catcher P.J. Higgins tried and failed to throw him out, and Azocar snuck home to tie the game.

The two teams traded runs in the fifth inning, with West Michigan tying the game 2-2 on an RBI single from Will Maddox that scored Zambrano.

“The pitchers were unbelievable today,” said Graham. “We have a good bullpen right now. These guys are coming in and throwing strikes.”

The Whitecaps’ starting pitcher on Thursday will be Beau Burrows, the Detroit Tigers’ first-round draft pick in 2015.